Ralph Clark from Ingression Point asked me if I’d be up for reviewing a pre-release set of his company’s dry-erase Automagic Tiles, which are currently being funded through Kickstarter. I’m a fan of dry-erase tiles for tactical mapping, so I said yes; a package of tiles arrived a few days later.

This review is based on pre-release tiles that might differ from the finished product.

What has come before

The basic concept behind all three products is similar: dry-erase map tiles with puzzle-fit edges that enable you to quickly draw a map, add tiles to it as the PCs move around, and remove tiles to reuse them where they’re needed most. You also have the option of pre-drawing your maps, which requires careful tile stacking or some sort of non-absorbent material between the tiles. Tact-Tiles were 10″x10″, Battle Boards were 11″x11″.

Battle Boards were basically a successor to Tact-Tiles, which were popular but for some reason didn’t stay on the market for all that long. They were similar in size, but instead of being gray with raised (relief) brown grid lines they were white with grooved grid lines. I actually didn’t know Battle Boards had ceased production until I was doing my homework for this review and got a database error from their website; if my assumption is incorrect, then they might still be around.

This review isn’t a comparison of these three tile options. Given that two of them are out of “print,” that doesn’t seem like it would be too useful. But the context is important, and you might have experience with one or both predecessor products, so I wanted to establish that baseline up front.

My experience with dry-erase map tiles

I used my set of Tact-Tiles in several short games as a GM, and then in at least one campaign lasting more than a year as a player; I still have that set (they’re built to last). I logged dozens and dozens of hours of play time using them over the course of a few years. They rock.

Battle Boards I’ve only used as a player, but we used them in virtually every session of two D&D 3.x campaigns played weekly over the course of about two years. I liked them a hair less than Tact-Tiles, mainly because the grooves tended to collect dry-erase dust and I found the white surface a bit too stark compared to Tact-Tiles’ gray plastic. The first problem was minor and the second was purely a matter of personal preference; Battle Boards were also a great product.

The drilled tiles have no grid, or if you like they have a virtual grid defined by its vertices. Here’s a full standard set on our (increasingly battered) dining table: 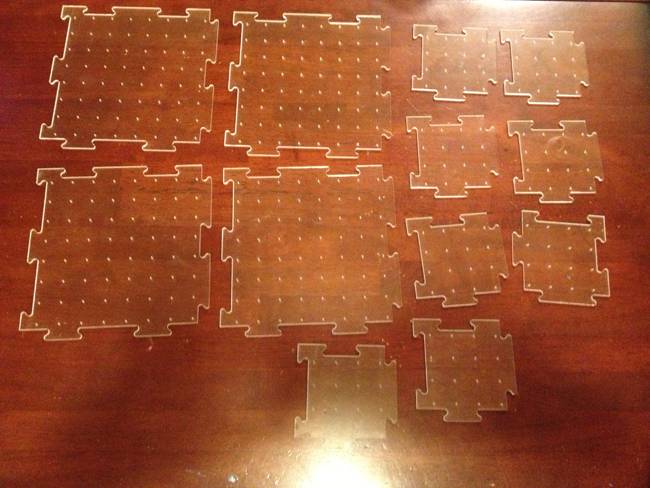 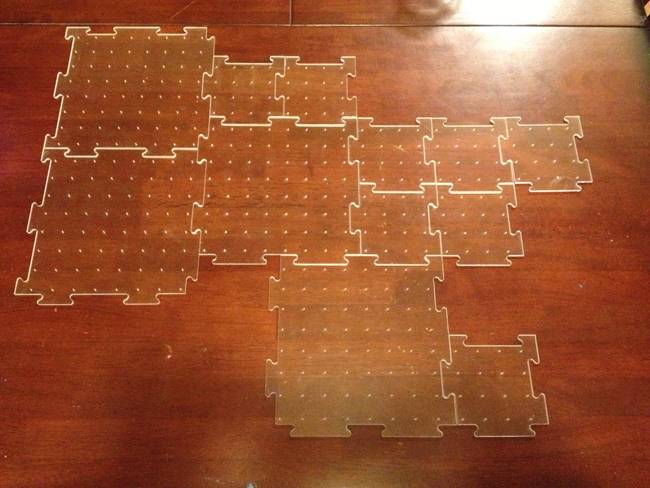 That picture showcases the coolest thing about Automagic Tiles: their connection options. Four small tiles can be assembled in a square exactly the same size as one large tile, and you can connect small and large tiles in different ways because of how cleverly designed the puzzle edges are.

The mix of small and large tiles is also nice, as it means that when all you need is a tiny room or corridor you don’t need to use a whole tile. This gives you a lot of options and stretches the mapping space available in a standard set.

Here’s another picture of that layout, this time with a map. Note the different connection options on display: 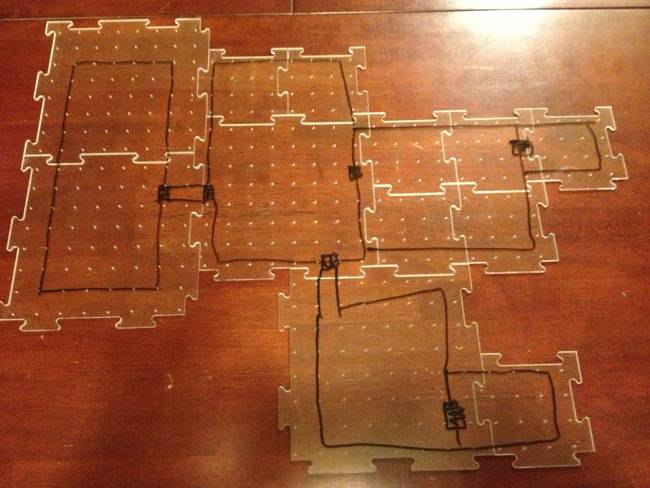 The holes in the standard tiles provide a nice amount of tactile feedback that tells me whether or not I’m drawing a reasonably straight line. The holes go all the way through, so you can flip tiles over and use either side; both sides erase cleanly.

These holes also have a much cleaner look than the scored lines in the other type of tile, and they obscure less of what’s under them when used in conjunction with a map or background sheet. The combination of tactile feedback when drawing and minimal occlusion of what’s below the tiles is fantastic, and I like those two features a lot.

The holes also don’t collect dry-erase dust, something I worried about when I first heard about this feature.

Here are my standard tiles over a Birthright map, with some supply lines and battle plans sketched in: 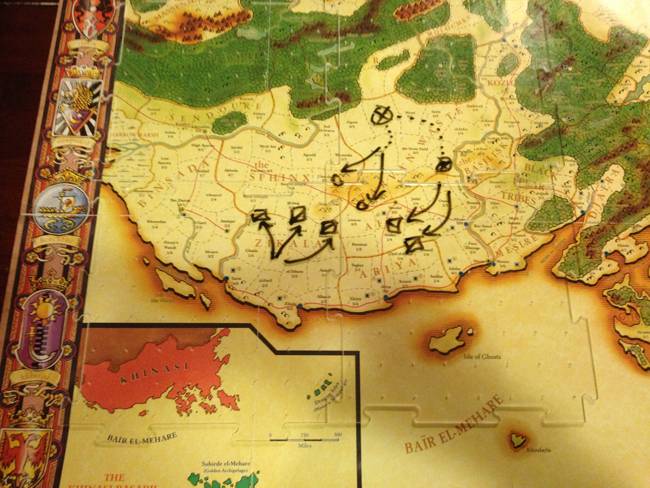 I like having the option to slide something under the tiles, and I can see getting good mileage out of this aspect of Automagic Tiles. 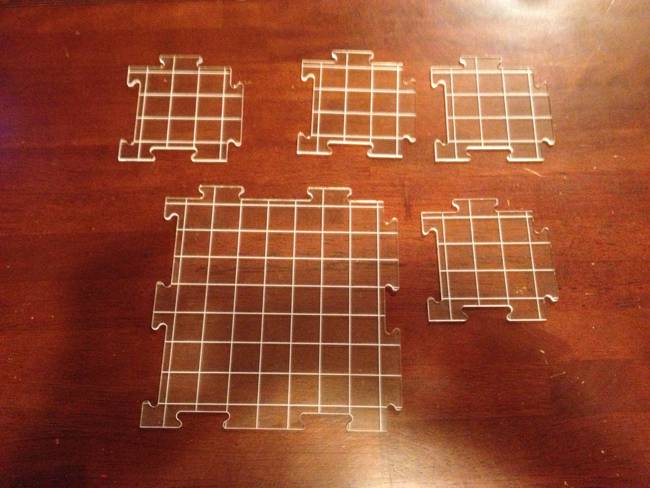 Here they are assembled: 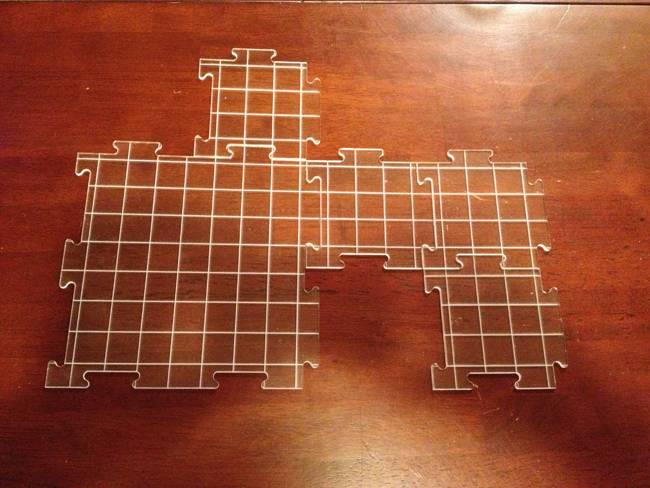 Accustomed to drawing on Battle Boards, I flipped them all scored side up and sketched out a quick map. (With Battle Boards, the scored lines are intended to act as “guide grooves” for drawing straight lines.) Here’s my map: 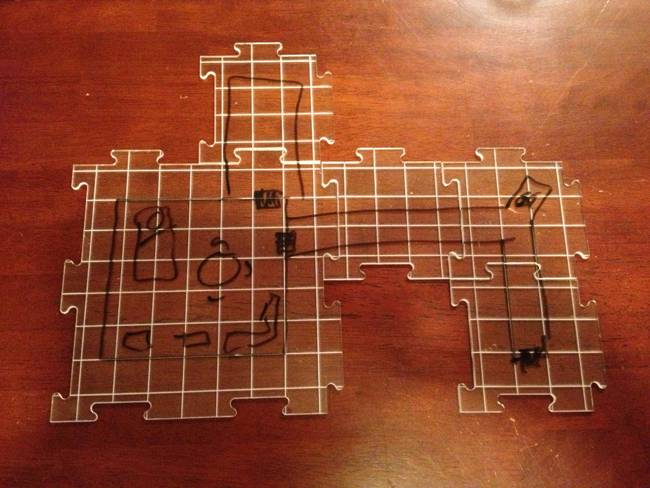 Using them this way proved to be a mistake, as the scored lines absorbed the dry-erase ink and made it impossible to erase my map entirely: 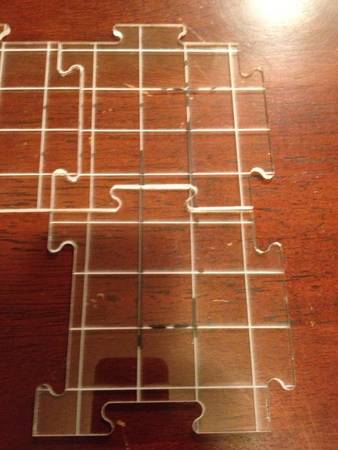 I broke out my whiteboard cleaning spray and was able to get rid of some of the leftover ink, but not all of it. I’m not sure what, if anything, would get them all the way clean.

I imagine the final product will include a warning against doing this, and I suspect other folks might instinctively use the smooth side rather than the scored side, but I wanted to mention it. The smooth side erases cleanly.

Setting aside the scored tiles having a Do Not Use side, which isn’t a flaw so much as it’s something to be mindful of, I have three problems with Automagic Tiles.

The first is that boring the holes in the standard tiles, and scoring the lines on the scored tiles, leaves some “burn” or “fuzziness” around the holes/lines. It’s not a big deal with the holes, as you can see in this close-up, but it’s worth noting: 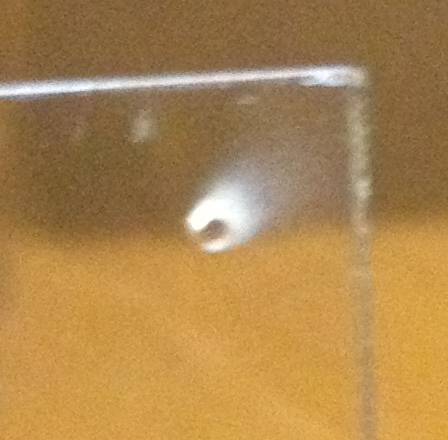 It makes the scored tiles look sloppy, though — enough so that right out of the package I didn’t like the look of them. Here’s a close-up:

The biggest problem for me, though, is the overall look and feel of the tiles.

My tiles were gritty when they arrived. (I don’t know if this is due to them being pre-release products.) Consequently, they’re covered in scratches. Scratches are hard to capture on a phone camera, but the area by my hand is pretty representative: 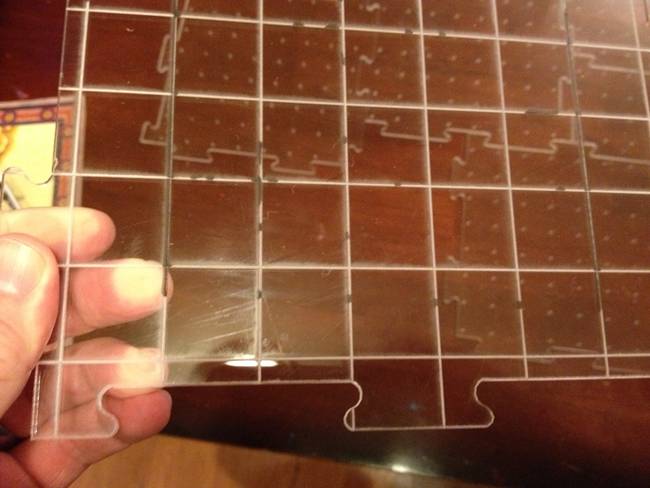 Additionally, the edges of the tiles are rough to the touch in places and there are numerous spots around the edges that are marred or chipped. Here’s a close-up that shows those issues, which were common to every tile in my review package: 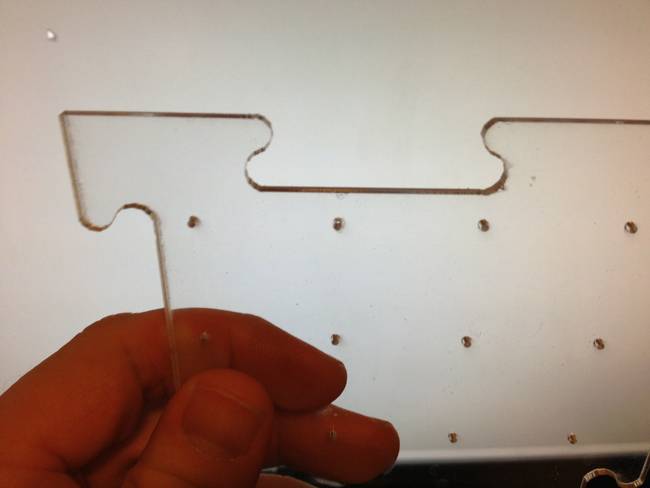 Taken together, these problems detract from an otherwise excellent product.

Automagic Tiles have four great features, but on balance my pre-release tiles didn’t make a favorable impression. If I’d purchased these tiles I would have been disappointed, particularly by the scored tiles. I see a lot of potential in Automagic Tiles given their strengths, but the quality of the tiles I received is lacking.

Because Automagic Tiles aren’t in production yet, they’re still undergoing development. For one example of that, check out Kickstarter update #18, which notes that the scored lines catch too much dry-erase powder and require extra effort to clean. The finished product may be significantly improved.

Here’s what I liked about my Automagic Tiles:

If you have any questions about Automagic Tiles that I can answer based on my set, I’ll be happy to answer them. Thanks for reading!