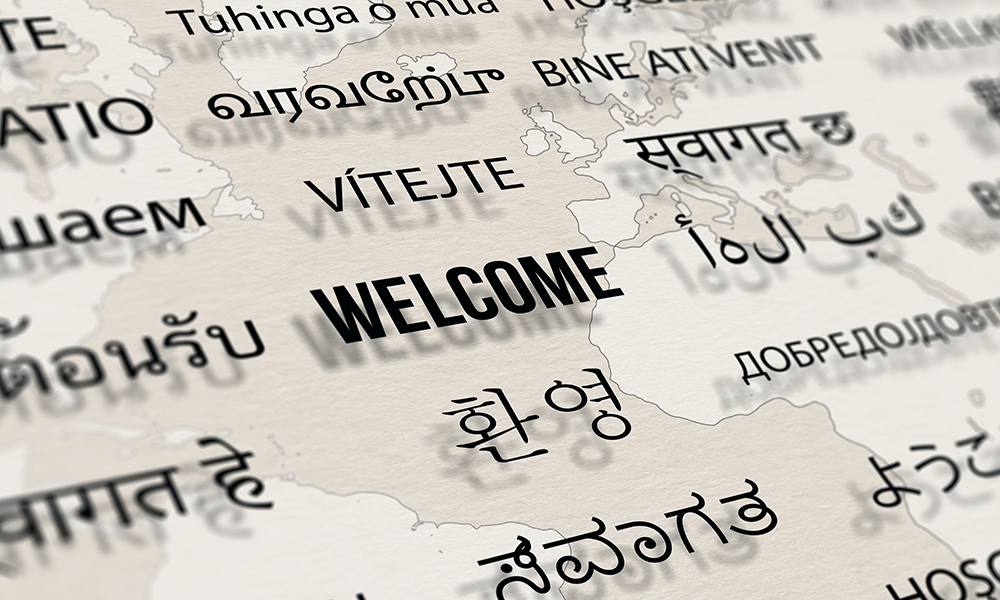 I imagine you must have noticed that in most fantasy realms from stories people all talk one same language. This does happen in science fiction as well at times, but depending on the setting, sometimes other languages are included as well to give the impression of a more advanced world. Nevertheless, when it comes to the middle ages, there’s always the large group of humans that share one language, and all other lineages that have their own one. After some thought and reading, I decided to formulate my own opinion on the subject, which you may or not agree on, but it might at least let you know some things you may not have thought about, possibly leaving you wanting to make some changes in your world.

This morning, I was doing my usual Duolingo lectures that my cellphone forces me to do. I’m a Spanish speaker, that has learned throughout my childhood to speak and write English almost perfectly. Now that I am adding French to my repertoire, and found myself a friend in India I regularly talk to (in English), I can see how language greatly changes the way one thinks. It may seem dumb, but the fact that you have to phrase sentences in a totally different way from language to language, or how different things can be categorized from one language to the next one indicates how vastly distinct societies can be. As an example, I learned from my Indian friend that in India both the Sun and Moon are considered what we would call planets in their language. That’s mostly something that comes as a result of their culture, which I found incredibly interesting.

Adding extra languages to the different civilizations can have player characters easily comprehend where the NPC that is speaking is from.  If you were to catch someone speaking German, there’s a good chance that person is from Germany, had access to a great education, or maybe there’s some story to tell there. Someone who fought in a war, or acted as a spy in an enemy territory might have gathered some words from that language, and the fact that the NPC is/isn’t fluent at it or has/has not the accent can also tell you much about its backstory.

A language tells you a lot about the culture it comes from. In some made-up language, there may be thousands of names for liquors or booze, while a word for “petal” may not exist as flowers are mostly ignored, or used fully as an ingredient for some drink. In that same vein, there may be 5 new words for different positions in the royalty that are unique to that language, indicating a level of organization that is above the average, or at least different than your usual ones.

While fantasy games may have languages such as elvish, dwarvish, and more, why don’t these lineages have their own variation from that language if the dwarves are from a different mountain? Just like many of the languages that come from Latin have words that are fairly similar, variations from the elven language can have characters attempt to understand what an NPC is saying without fully knowing the language. This can have the player characters receive incomplete information, or even completely wrong, leaving for some fun shenanigans or repercussions.

Let’s be real, the actual reason all these worlds usually use mostly one language is to make it easier for the players to understand and remove that extra layer of complexity. While having the player characters face enemies that speak in another language can give a very interesting tone to the encounter, at the same time, it would be lame for the villain to do a villain monologue in a language none of the characters understand.

In a way, adding more languages to the world puts an extra layer of pressure on the GM. While it does make the world more diverse, I personally believe that if you don’t make customs, food, architecture, clothing, etc feel different as well it may fall a little dull and shallow. What’s more, one can not simply create a whole culture and civilization like the Fremen from Dune out of the blue. This does require research, time, and really wanting to go that deep as a GM, which is not something many will look to do.

What is an easy way to add languages to your game?

Firstly, think of a reason a group of people would have a different language. What sets them apart from the others? Usually, it is war and politics that interfere to make one region part of a kingdom, city, empire, etc. Other times, it’s just a geographical division between the two, having the people that live to the south of the river and those who live north to it. I might make another article in the future going further into detail. Culture, as I’ve said before, also plays a huge part in language, as lots of phrases can derive from it. If you don’t plan to create a whole culture for now, try to think at least a few things that make these groups of people interesting and different in some way.

Once we have all the basic stuff we need to start with the language creation, I like to first think about what it sounds like. This is when we can take a huge amount of inspiration from the real world. Is it a language that sounds a bit more guttural or relies mostly on consonants? Maybe it’s a bit more stylish, or sounds more fluid, finishing most sentences with the same sound. You don’t actually need to talk this gibberish as a GM or player, but letting everyone know at the table how the language sounds (or saying it sounds like X language with these differences) can immerse everyone at the table even more. That way, whenever you say that your character or NPC starts talking in that language, it gives a mental image to the players on how you are sounding. I’ve seen this done in the previous campaigns a bit by Matt Mercer in Critical Role with Zemnian in C2, and Marquesian in C3.

As time progresses, you can make this language more believable by adding in all those things I wrote about above. As a GM, have an NPC describe something that doesn’t have a word for it in their language to make the difference clear. Those details work a long way and can have your world feel much richer.

2 Responses to Languages and Worldbuilding