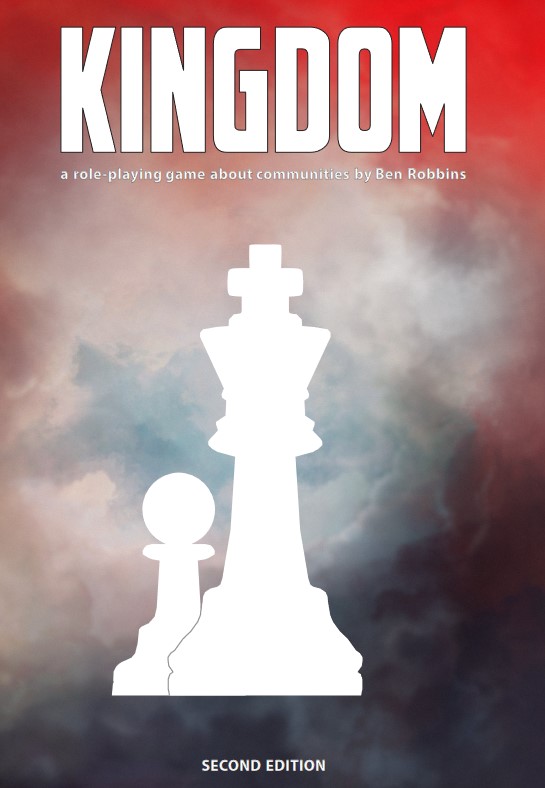 It probably isn’t a stretch to say that the point of view of most roleplaying games comes from the perspective of characters that the players create. Those RPGs that allow for more player input into the setting often frame this as a “break” in the expected action, and the players decide to fill in the gaps of a campaign that haven’t already been established, then return to the point of view of their characters. It is probably also not a stretch to say that most RPGs don’t focus on “troupe” play, where players don’t have a single perspective character that they play, but rather, they have multiple characters through which to view the game world.

Kingdom 2nd Edition is a game that does not conform to these general RPG expectations. Rising out of a focus on a single organization and span of time within the larger setting creation game of Microscope, Kingdom is as much about collaborating to create the challenges facing an organization as it is about playing the characters that comprise that entity.

This review is based on the PDF version of Kingdom 2nd Edition, which is 99 pages in length. The PDF includes a page of legal publication material, a dedication, a table of contents, a single page afterward, a playtesters page, sample character and role sheets, and a cheat sheet for game resolution. The beginning of each chapter has a full title page to introduce it, and the book is in a single column layout.

Kingdom doesn’t have much in the way of artwork, although illustrations are showing how to fill in the various sheets and the assumed arrangement of the play space. In addition to having topic headers and sub-headers, as well as various bullet-pointed explanations, there are also indicators on certain pages for read-aloud text, to facilitate a “no-prep” game.

What Is a Kingdom?

The first section of the book generally describes what the game is, and what constitutes a “kingdom” for this game. It could be a literal kingdom, but it can also be just about any concept for a general community that you can conceptualize, from fan clubs to schools, to corporations.

There is also a list of materials needed to play for a face-to-face game (with more notes later in the game for online play), as well as an explanation of the play cycle. Players will frame problems for their community, and then take turns framing scenes and determining how well the community is resolving or weathering these developments.

This section also recommends that when playing the game, one player acting as the facilitator reads the “read aloud” pages as written, to help make this a “no-prep” experience that is easy to learn.

The next section of the book details how to set up for the game. The steps for creating the kingdom itself come first, and include the following:

Once you establish this setting, the next step is to detail your characters. The steps to character creation include the following:

Much of this setup is to make sure you are creating characters invested in the community’s fate and invested in interacting with the other characters.Â

The process of resolving the game is to create a crossroads sheet for a threat. Boxes are added to this sheet, which can be regular boxes or crisis boxes. Whenever all the boxes of one type are filled in, the decision presented on the card must be resolved and is framed in a yes or no manner.

The roles provide the following in this process:

Resolving a crossroads is a big change for the setting, but if all the boxes for “crisis” are filled in, that’s a cue that the crossroads might be an event that ends the kingdom. On each player’s turn, they frame a scene with their character, and they note if the scene checks off the regular boxes or the crisis box.

Characters can challenge other roles or attempt to mitigate the absolutes established by other players, but in that case, you may end up with a crisis checkbox, or you may have another character adding terms to what just happened.

This section discusses how to play a longer game of Kingdom, with a broader view of how the kingdom has developed. In this case, you add a step at the end of kingdom creation, defining additional eras. When you finish this step, you determine which era you want to look at in play.

This section discusses several different topics, like how much time to skip between eras, and how connected different “versions” of the same kingdom are across eras.Â

This is one of my favorite parts of the book. It presents 18 different example kingdoms. These range from a local high school fan club to a neutral space station situated between contentious powers, to a pantheon of gods, to a hospital operating during a zombie apocalypse, and many more.

Each example kingdom has a section that helps further define the concept, another section that explores the context of the world where the kingdom exists, example threats, and example crossroads. Each of these kingdoms is summarized on its own page. The chapter wraps up with almost 20 more example kingdoms, although all of these are summarized in a paragraph-long pitch.

This is a great section for illustrating the wide range of concepts you can explore with this game, and I think anyone that didn’t quite picture how the game explores topics will get a lot out of the full-page examples provided for many of these kingdoms.

This is broad advice for the game, ranging from creating your own kingdom ideas outside of the examples, how to limit options to keep everyone on the same page, playing online or with only two players, and how to teach the game. In addition to these topics, it addresses the importance of table safety and the comfort of everyone at the table, as well as how to address players that aren’t staying within the bounds of their character roles.

I’m not sure that I agree that “read aloud” is the best approach to having everyone learn the game, and I am glad that the safety section is so emphatic, though it leaves a lot of modern safety discussion by the wayside. I like that it spends a good deal of time talking about how to constructively make sure everyone is doing what they need to do for their role, especially since the game doesn’t have a dedicated game facilitator to hard frame a situation that might be getting out of hand.

Rise
Â This is a strong game to use on its own merits and a game useful as a supplemental tool in other games.Â

There is so much you can do with this concept, and it works very well both as a game on its own, and as a means of adjudicating the history of a nation, corporation, or other organization within a larger game. I really appreciate the summaries and play materials included with this game to clearly illustrate the process of resolution.

I know I don’t have the data to back up this feeling, but whenever I’ve read-aloud text to a group, I think that it may have communicated the process and rules to the group, but my brain doesn’t engage in the material. I always feel like I have to go back through and “personalize” the message for my own brain after the reading. I am glad there is a safety discussion in the book, but it feels odd that it is focused on the X-Card and “safe word” mechanics and seems to indicate that there isn’t much out there in terms of safety tools. That’s missing out on a lot that has been developed in the years since the X-Card came about.

As I mentioned above, this is a strong game to use on its own merits and a game useful as a supplemental tool in other games. It is also a great “one-shot” game to introduce for game sessions where other regular games can’t go off as planned. That said, my main hesitancy in a wider recommendation just comes from the number of people I know that would rather have some kind of randomizer or currency when it comes to resolution, rather than consensus-building techniques.