Following on the heels of yesterday’s post about Treasure Tables at GenCon, I’d like to share some of the cool stuff for GMs I saw (and bought!) at this year’s GenCon. (Pictured here is Kenzer & Company‘s limited edition B.A. Felton bust (from “Knights of the Dinner Table”), which I’ll be using as my GMing mascot.)

Unlike last year, when I didn’t take pictures of any of the goodies I wrote about, this year I remembered to take at least a few photos.

We’ll start small, and work our way up to the coolest item. 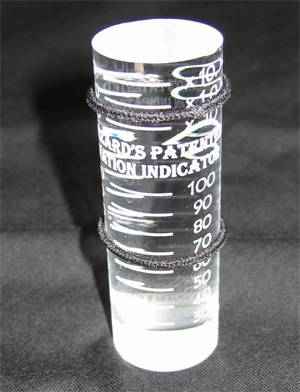 This nifty product from Emerald’s Emporium meets a specific need almost perfectly. It’s a $13 lucite rod marked with different elevations, and it comes with two hair tie/rubberband thingies that fit snugly around the rod.

You pop it on your battlemap, stick a mini on top of it and then move the bands to indicate your character’s height (bottom band) and multiplier (top band). When the party’s sorceror casts fly, you set the multiplier to 1.0 — and when two characters fight an aerial duel, you can use the 10.0 line to take them high into the skies.

The only problem I can see is that it’s not wide enough for larger flying minis — like dragons. That’s too bad, but it doesn’t keep it from being a neat GMing aid at a fair price.

I posted about Dragonfire Laser Crafts in last year’s GenCon product roundup, but without a picture — and this year they had an even cooler ship on display.

This airship was fully three feet long, with multiple decks, movement squares on the wings and all sorts of little details. Apparently they premiered it at Origins, and this was their last remaining display model. One of the folks running the booth said it was missing a few pieces, so the real thing should be even sexier.

At present, it’s not listed on their website. If I had to guess at a price, I’d say $125 (the price of their badass galleon) to $150 (for the extra bits). If I was running a campaign that featured airships, I’d jump on this in a heartbeat. 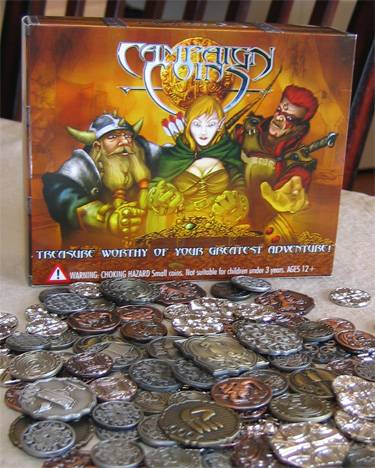 I saved the best for last: Campaign Coins, crafted by a new company out of Australia. Hot damn, these things are cool.

It’s hard to express how cool they are to hold, but suffice to say that these guys spared no expense. The coins look and feel great, and they’re packed with great touches: each metal type has its own theme for the front-side images, and a distinctive common design for the backs; they’re minted with a process that gives them a drybrushed effect, adding depth; they thought about which coins would be used the most in a fantasy world, and made the least-used (platinum) incredibly shiny; and so much more.

In short, they’re easily the coolest GMing product I’ve ever seen at GenCon. (I’ll probably wind up doing a full review of Campaign Coins in the near future.)

If you were at GenCon, did you see any new GMing products that I missed? Do you have any questions about the ones I highlighted?

17 Responses to GMing Products at GenCon 2007