Dais Ex Machina (DEM) Games has just released a free adventure using their Amethyst rules, called Biohazard.Â  It is being released in Combat Advantage #15 from Emerald Press, which should be available for download today.

Some Disclaimers–First, I was a playtester for this adventure, running this for some friends at GenCon this year. For the record, it was a lot of fun to run. Second, I was provided a free copy of the final version of the adventure for this review. 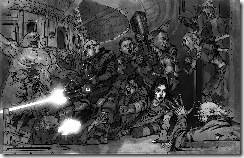 If you are not familiar with DEM or Amethyst, take a look at my review of DEM’s Hearts of Chaos adventure, which was released on Free RPG Day last year. It provides a detailed description of the rich Amethyst setting and a more detailed explanation of the rule system.

For those of you either too dedicated to this article to look at the link, or too lazy to click, let me sum up:Â  The world of Amethyst is our modern world, which has been overrun by a fantasy world. Both worlds struggle for existence in a struggle of Order vs.Chaos.

Under the hood, Amethyst is a GSL product, which uses the Dungeons & Dragons 4th Edition rules. Amethyst takes the GSL a step forward by adding rules for modern combat and character classes based on modern combat. The modern classes, have powers that give a real modern action feel to them.

What Do You Get

The PDF is 25 pages in length. It opens with an awesome half page Nick Greenwood illustration (see above). There is no interior artwork, but it does use the same Amethyst borders as seen in Hearts of Chaos. The book also contains five pre-generated characters that come complete with some playing advice from the designer. The last two pages of the book contain color maps of the main locations in the adventure.

You Got Your 4e Stuck In My Left 4 Dead

Biohazard is not part of the Amethyst canon; it is a stand alone adventure, thatÂ  showcases the modern combat classes and weapons. You will not find magic, elves, or any fantasy in this adventure. The focus is on the use of the modern combat rules and classes.

The plot is a delightful tale of a small special forces team sent into an infected town, looking to find out what happened, and ultimately just trying to stay alive. It has everything you want in a good zombie adventure: flesh eating monsters, automatic weapons, and explosives.

The plot of Biohazard is pretty straightforward, with 6 combat scenes and a skill challenge. The combat scenes stay true to the zombie genre, with wave upon wave of zombies being thrown at the players. There is great tension in the ending scene that feels like the climax of any great zombie move.

What I love about DEM games is that they write smart adventures. The zombie survival story is a pretty straight forward story plot, but there is a nice twist in the plot that adds an extra layer of tension to the climax. In a similar manner to Hearts of Chaos, the ending is not shiny and clear cut, but instead rests in the players’ actions.

Brains, Brains…This Adventure Has Them

The modern classes do a great job of representing a number of modern archetypes, and the powers emulate various action scenes found a modern action movies. At the same time, the classes and powers adhere to the 4e core mechanics, so much so that anyone familiar with 4e will have no problem understanding the classes and using the powers.

Biohazard is a fun, action-packed adventure, that plays well, and a highly entertaining. The adventure can be run in a single evening, and can make nice break from your normal game. If you have any interest in what a 4e modern game would be like; this is the game for you.