Five Odd Vampires For Your Game

Halloween is around the corner. It’s time to put some creepy vampires into your game. Here are a handful of vampires I’ve made as characters or NPCs over the years. Hope they prove fun for you and your players… if not for their characters. If you’ve had a vampire you particularly liked in one of your games, tell us about them in the comments below. 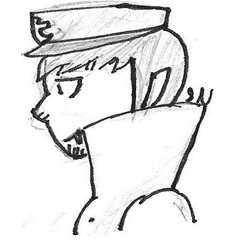 The Captain: An old fisherman, this vampire haunts a large body of water. By day he sleeps in the sunken wreck of his ship. By night he prowls the shores and nearby land searching for prey. Brutal and unsubtle, the Captain hunts by overpowering isolated victims. A large and imposing figure, he wears a yellow rain slicker and hat. Unlike normal vampires who can shape shift into bats or wolves, the Captain can take the form of an albatross or a shark. Adventures featuring the Captain play out like a slasher flick. Though he doesn’t actively try to murder his victims, his overpowering strength, disregard for life and insatiable hunger often have that result.

The Cockroach: Emaciated, naked, and animalistic, the cockroach scuttles on all fours through back alleys tearing apart vermin and preying on those it can overtake. His skittery movement and slim frame make him a master of stealth, able to fold into trash cans, crawl under dumpsters, wriggle between bars or down old coal shoots. Hunting this beast requires crawling through the back alleys and garbage of the city, often literally. Though the creature doesn’t often kill, he is a vector for dozens of diseases, often resulting in deadly complications for his prey. 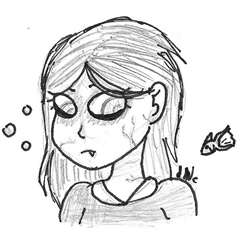 The Drowned: A schoolgirl in damp, out of style clothes carrying a goldfish in a small glass bowl, this vampire uses her powers of illusion to play with victims before she feeds, but is largely harmless unless her ire is raised.Â  In addition to being a bloodsucking monster, The Drowned Schoolgirl has potent illusion magic and can alter the appearance of herself and her surroundings. Hunting, she uses these powers to confuse and disorient prey. When angry she uses them to terrify and cause victims to endanger themselves. She is fond of taking different horrifying forms. Her favorites include a floating corpse, her zombie goldfish nibbling at her flesh and snapping at nearby targets and a ferocious toothy mermaid. Thanks to her illusions, adventures revolving around this vampire may play more like ghost stories with visions, shifting terrain, and deadly traps.

The Glutton: Once a physician, this massive beast still dresses in his bloody tattered uniform and lairs in an abandoned morgue, lab, or hospital basement. He most often hunts by overpowering his victims then immediately distending his heavy jaws to swallow them whole. After allowing their flesh to dissolve, he disgorges their skeletons, covered in his highly corrosive blood. Occasionally he will drag a victim back to his home to dissect before consuming them. Horribly strong and nearly indestructible, The Glutton isn’t hard to hunt down but is a tough stand up fight. Instead, opponents may have to outwit this former man of medicine to destroy him. 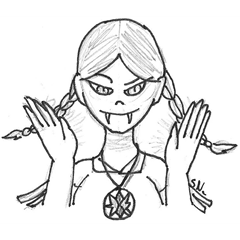 The Shaman: An ancient holy woman, attacked by a vampire and sealed away by her own tribe for ages before her accidental release, this vampire is near feral but quick, ferocious, independent, and armed with twisted nature magic. Clad in fresh hide and armed with a stone bow she stalks the wilds feeding on wildlife, hikers and campers. Acutely feeling the loss of her tribe and her vampire master she has begun to gather thralls and beast minions and is adapting to her new world quickly. Despite being from another time and a little mad, The Shaman is a brilliant tactician and will leverage her minions to gather intelligence and harass anyone encroaching on her territory.