I love Fate Core, and I enjoy running it at cons. For a long time I spent my efforts making pregenerated characters (for example: Dash-Dot-Dot-Dash), but many players don’t deeply identify with pregens. I wanted a system that led to quick identification with characters, but also a system where character creation didn’t take too much time, since it needed to fit into a con slot.

One solution that can develop characters quickly is right in the Fate Core rulebook: on the fly character generation. I’ve used it for some con games (like FAE Super Heroes, inspired by this gaming with kids AP report), and they’ve gone pretty well, but you lose the advantages that come from building characters in advance. (Like making sure that the characters fit the world and the adventure, and will get to use their key skills.)

I recently found a system that works very well. I began by calling it “snap together” characters (in my mind a little like “click and lock” characters in Capes), but decided that it’s breaking characters into strips or columns. (It’s a little like Atomic Robo’s Modes, but in “vertical” strips instead of horizontal modes.) 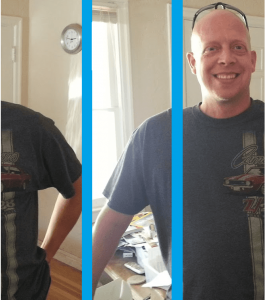 Really, it’s pre-gen characters in pieces. Like baking a cake from a box instead of from scratch, some of the steps have been combined to speed you on your way.

The first scenario that I used this technique on was Mark Diaz Truman’s Dark Star campaign setting. The scenario writeup features three characters that can be your pregenerated PCs, but I wanted to offer five characters in my con slot. Since I was going add some characters anyway, I decided to dismantle the existing three characters and see if players would reassemble them the the way they’d been written. (Spoiler: They didn’t.) 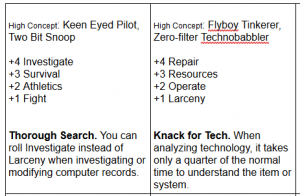 Around the table, the five high concept blocks had been cut apart and were handed to each player. They read the block then passed the characters to their left until everyone had read them all. Then they briefly discussed and selected the high concept that they wanted to build their character around.

This was followed by blocks for the second column, headed by a character’s trouble. Trouble blocks contain: 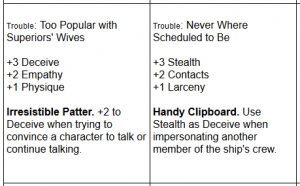 We passed these around in the same fashion. Players chuckled as the troubles came around and picked their favorites once everyone had read them all.

Once players had selected one block of each type, they copied them onto a character sheet, dealt with duplicate skills [see below], and were ready for their briefing. During the briefing, we had the characters generate one last aspect (a relation to the player to their left), pick out their fighter, and leaped into play.

All told, reading the setting text aloud and selecting character blocks took about 20 minutes, players quickly describing the assembled characters took another five, and generating the relationship aspect took about five to ten more minutes, for a little over a half-hour from sitting at the table to starting play with a customized character.

For the mini-con, I also ran a Spirit of the Century game on Sunday. In the past, character generation in Spirit has bogged down at the Stunt selection phase–it’s a great system, but it takes a while to thumb through the available options. Leaving out stunts isn’t appealing though; Stunts can really accent characters in Spirit of the Century. Fortunately, identifying stunts and tying them to characters is easy when you’re not under the pressures of a con slot… so I used the block format for my (slightly adapted) Spirit game. 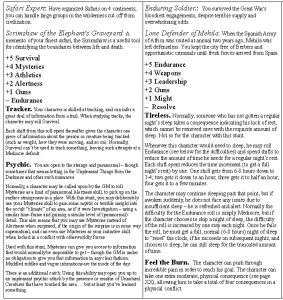 Using the SRD, I was able to copy the full stunt text over, helping reduce the bottleneck due to the lack of books at the table. It also let players imagine the stunts in play–which was very useful, as my players were new to Fate altogether, much less the specialized Spirit of the Century version.

Much like the Dark Star high concepts above, the Pillars of Hercules characters have two Aspects and a skill column [one skill of each rank, beginning with Superb (+5), since they are playing pulp heroes]. Because Spirit of the Century characters begin with five stunts instead of three, I included two in the high concept block.

While Spirit of the Century characters don’t have Aspects explicitly called trouble and high concept, they’re both useful concepts. Below are the second blocks, including an Aspect that’d make a good trouble… 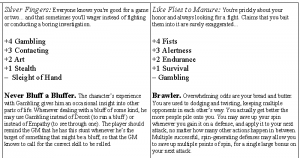 This is the next column of the character, with a skill of each size from Good (+4) down to Average (+1), a troublesome aspect, and another stunt.

You may have noticed that the characters have an extra skill labeled (-) at the bottom of their list. After the Dark Star game, I realized that duplicate skills were likely. The (-) skill is there as an option, in case you need to resolve duplicate skills.

You might already anticipate a problem: with so many skills, it’s almost impossible to prevent players from selecting blocks with duplicate skills. For example, in the Pillars of Hercules game, a character who takes the High Concept block on the left (with the Safari Expert aspect) and the Trouble Block on the right (with the Like Flies to Manure aspect) will have Alertness at +3 (from Like Flies) and at +2 (from Safari Expert).

When I first mused about the system, I imagined something like Atomic Robo’s promoting duplicate skills, but that would mess with the skill columns and encourage aiming for skill overlap.

Instead, if a skill appears in multiple blocks, you copy the higher skill onto your character sheet. You cross out the lower ranked copy of the skill and promote every skill below it up the column one step. So, for the honorable safari guide we just looked at, you’d increase Guns to +2 (replacing the duplicate Alertness), and move Endurance from the reserve to Average (+1). If you wind up with lots of duplicates, borrow (-) skills from other columns, or just pick any skill to fill the slot.

Because you’re prepping the characters, you can make sure that Aspects and Stunts are unique–you needn’t worry about their duplication, unless you built in duplicates for some reason. (Avoid that!)

What do you think of the character blocks idea above? Do they sound too fiddly for your games, or not enough relief from the burden of prepping pregenerated characters?

Fate GMs, do you have any questions about the system or its use? Did I make unconscious assumptions in my explanation that you’d like clarified?

I look forward to your comments!