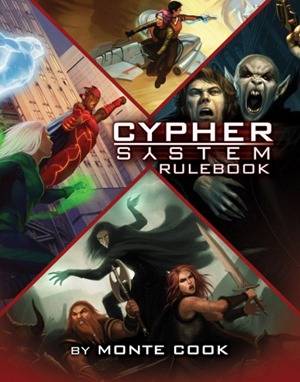 I’m still reading the Cypher System rulebook, though I suspect many people would get through it faster than I have. So far I’ve finished the first 10 chapters (through page 234) covering character creation and the rules. Though the sections on adapting the base system to various genres and the GMing section remain, what I’ve read so far encompasses all the necessities for running a game.

Character creation in the cypher system is fairly easy. Couched as creating the sentence “I am an adjective noun who verbs” you select a type (think of these like a class), descriptor, and focus for your character. These all have descriptive names and the book provides a list of each for you to choose from which is handy for choosing appropriate and interesting options without flipping through dozens of pages. With 4 types, 50 descriptors, and 73 foci, there are 14,600 possible character builds to choose from. Except…. that there is also a template for making custom foci, except that there are also 5 flavors which can be used to modify types, except that there’s a section in the optional rules chapter on modifying and creating new abilities, and except that type, descriptor and focus don’t give you a static set of abilities, they give you a suite of abilities from which you choose a custom subset. So really the biggest problem with the character creation system may well be option paralysis. The character creation section is handily the largest portion of the book at 174 pages (a little over 40% of the total page count). In addition I like the “triple template” character creation method as it allows plenty of freedom while still providing guidelines that prevent several common build problems found in looser systems (no grabbing the end tier power at character creation, no picking nothing but tier 1 powers, etc… although choosing conflicting type, descriptor and focus and over generalizing yourself into irrelevance is still an option, but that’s what GMs are for I suppose).

I did have a few miscellaneous observations on this section however:

There seems to be a healthy dose of repetition of abilities across various templates, so it’s possible to get pierce or armor proficiency twice, especially if you’re focusing on a particular concept. However it seems unlikely that you’d be able to duplicate so much that you would be having problems choosing abilities. The real “issue” here is that it feels like with some other organization scheme this duplication could have been minimized and the page count reduced. This seems like a PDF first, paper second intentional design decision though. That said, I wonder if each instance of the same ability is copy pasted or if they’re a link to a master list somewhere, the implication of which with regards to proofing and errata should be clear.

There are suggestions in the book that as a GM, before I run my game, I should go through the entire list of options in the character creation section (did I mention 174 pages?) and decide which options are and are not appropriate to my game. Further, it is implied that I really ought to be sifting through those options that I’ve vetted with a more critical eye and tweaking them to fit my setting better, even as far as creating custom types by swapping in and out abilities from the various flavors to create types unique to my game. In what will become a recurring theme in this article, I will say that this is a nice option to have, and a nice option to have the ability to completely ignore. In reality, this option is a gradient so you can go with anything from “Go ahead and make whatever you like, I don’t care.” to “Just pick your type, descriptor and focus and let me vet them before you do any extra work.” to “Here is my custom binder with everything carefully annotated.”
[EDIT] – Turns out there’s a handy Campaign Design Worksheet at the end of the book that helps make this less work.

In addition I’d like to point out that this character creation system is simply begging for a computerized tool of some sort. It’s already been done for The Strange, so I would hope that one is slated to be up soon for The Cypher System. C’mon MCG. Chop chop!

After the character creation section comes the equipment chapter. Like a lot of other stuff in the system, money and equipment are mostly abstracted. Items are only given a price category (inexpensive, moderate, etc…) and are really only useful as weapons and as Assets to reduce the difficulty category of your rolls (so a crowbar might serve as a medium weapon but also reduce the difficulty of barricading a door or breaking and entering). [EDIT] – Sample equipment lists for a variety of genres can be found in the Genre chapters, which will be discussed in a later article.

Next comes Chapter 9: Rules and Chapter 10: Optional Rules. These chapters recap the base system, which got a quick 6 page summary in chapter 3 (Choose a difficulty category with an associated target number. Adjust category up or down, but mostly down, by applying several sorts of modifiers then roll equal to or over the target number. Plus a few fiddly bits.), and expand on it a bit with some examples, then give guidelines for a lot of common special case scenarios and lay out some optional rules you might want to use in your game. However, parts of this section seem to be at odds with the feel of the system. We have a simple system with a single unified die mechanic, and that has been “…built for the GM to do as little “work” as possible (number-crunching, die rolling, modifier tracking, and so on…” and then we bring on the rules for how to adjust attack rolls based on who’s standing on higher ground, several different types of cover, light level, and water depth. And those “special case” rules are very often no different than just using the base system or impact parts of the system that have been abstracted away. Let’s look at sneaking for an example. Sneaking is on the list of example skills, so we know that we can be both trained (reduce difficulty by 1) or specialized (reduce by 2) in it and we know that if we have some misc advantages we can claim up to 2 of them as assets and each reduce the difficulty by 1. We also know that in general, the level of a creature or NPC is used as the difficulty when trying to use a skill or ability on them. We can also guess sneaking is speed based since it’s physical and it’s not might based. So what does the special case rules for sneaking tell us? It tells us that the difficulty of sneaking by a creature is it’s level. It tells us that sneaking is speed based. It tells us that assets reduce the difficulty of sneaking, and it tells us that being trained reduces the difficulty of sneaking. One new piece of info: moving at half speed reduces the difficulty by 1. Except that movement is abstracted, so moving at half speed is meaningless, and we would expect that moving at half speed would be counted as an asset and thus reduce the difficulty by 1 anyway, so the entire section on sneaking is useless. But… I can see the use here for those who want things explicitly spelled out, or who are less comfortable winging things on the fly, or who want to peruse the section for adventure ideas. So once again, this is a nice option to have, and a nice option to have the ability to completely ignore. Similar is Chapter 10: Optional Rules. There are some interesting ideas in there, but nothing that absolutely begs to be included, so at least at first, these will be a nice option to… you get the idea.

So, to sum up so far- the character creation system is elaborate and if I had to pick one word to sum up the Cypher System it would probably be “options”. I don’t however feel like the rules chapter adds a lot to the 6 page summary of the rules in chapter 3, but that’s not a big deal.