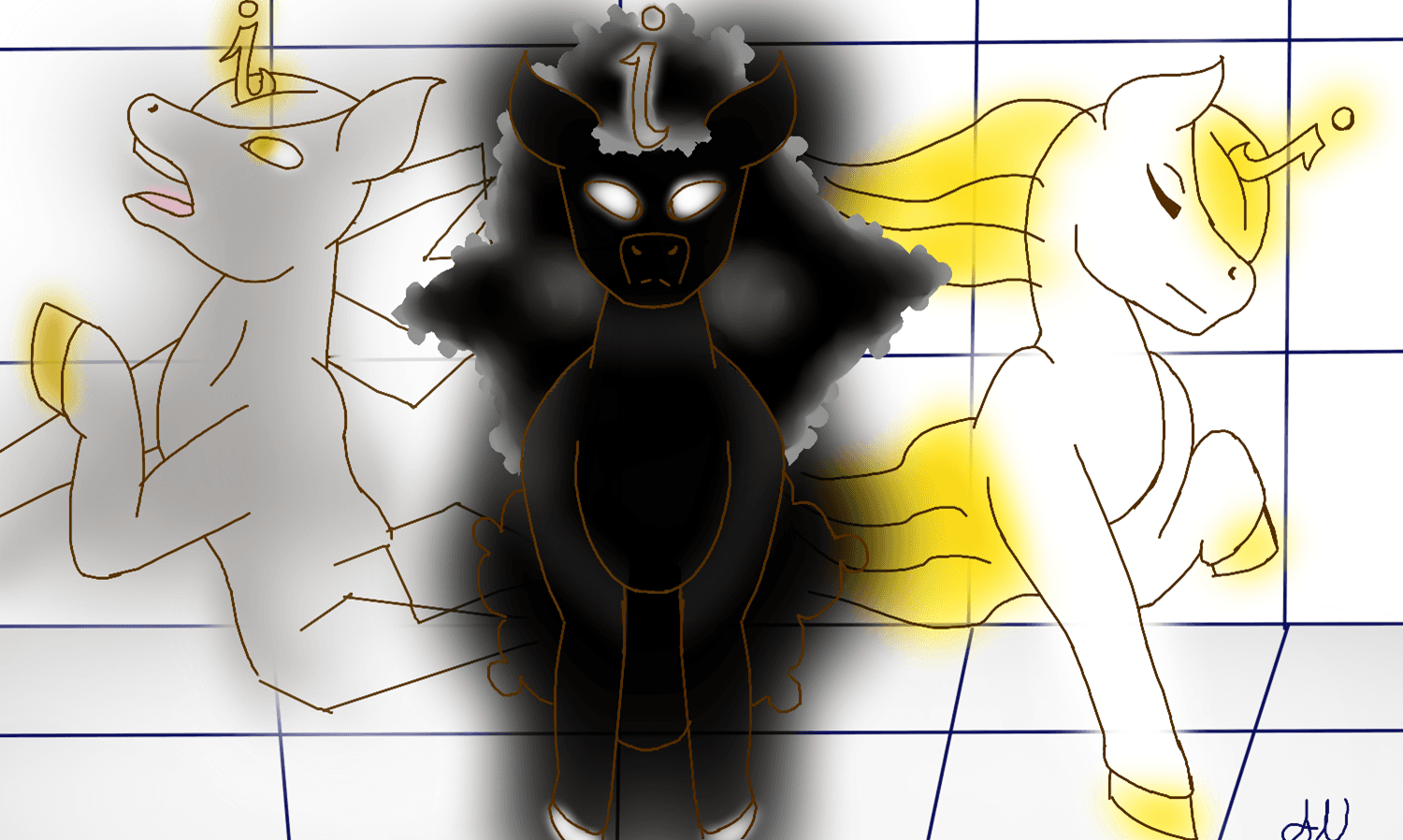 As promised in our Patreon video, I’ve recently begun my studies into the unÎ¯corn, a beast related to the mythical unicorn, but constructed of imaginary numbers. Not only have I been able to successfully confirm several of the commonly held beliefs about these fleeting creatures, but I have discovered two new subspecies of unÎ¯corn, one a product of the common variety and a pathological beast, the other a transcendentalÂ  product.

The Common UnÎ¯corn; the beast at right angles to reality
The common unÎ¯corn is a product of a more traditional unicorn and one of the outrÃ© creatures from outside our space and time.Â  It appears as a traditional unicorn that exists only partially in our reality, fading in and out, which lends it a phantasmal air. There are sections where its body is in transition and it’s mane and tail seem to be made of lines and hard angles and crackle in and out of existence. Close inspection of these portions has been known to give sudden insights into mathematics and cosmology for those with a high level of prior knowledge, but can also result in madness for those same individuals.
Being dimensional travelers and possessing strange movement abilities, unÎ¯corns can appear nearly anywhere, but they are found most frequently in areas one would expect to find a traditional unicorn and anywhere an active outrÃ© cult might have drawn their attention.
Despite its otherworldly appearance and heritage, the common unÎ¯corn is not usually hostile and can sometimes be convinced to assist or enter into alliances with those who seek it’s aid. Due to its equine heritage it can be used as a mount, but its riders will be subject to the same phasing as the beast. Beware: This effect has been know to damage or cause violent instability in some magical auras. In addition, being subject to this phasing has a more powerful inspiration effect than observation but brings with it a much greater danger of madness.
Due to it’s ability to traverse its own strange dimensions, the unÎ¯corn travels rapidly and can bypass most physical barriers and even some of a magical nature. It is resistant to most attempts to capture, hobble, slow or contain it. Riders will benefit from these abilities, but immersion in the outrÃ© dimensions required for this sort of travel is a nearly mind-shattering prospect.
Fighting a unÎ¯corn is a difficult affair. Its phasing makes it a slippery target for almost all weapons and magic. Only those with a component tuned to the unÎ¯corn’s strange dimensions can strike with any certainty. In addition, they must be dimensionally locked in some way to prevent them from simply winking out of existence when threatened. The unÎ¯corn’s phasing also allows its attacks to partially bypass armor and other defenses. It may also use its phasing ability as a weapon, knocking foes through other dimensions; both subjecting them to it’s madness effect and throwing them much further than would be expected. This effect does not seem to be able to throw opponents into the air or phase them into solid objects, but it can easily push them off walls, trap them behind barriers or even thrust them into nearby chambers. In rare instances, targets have seemingly disappeared completely, whether teleported great distances or trapped in another dimension is uncertain.
Though unÎ¯corns carry little of value, their dual nature makes them a highly sought after source of materials for a wide variety of components. Strange cults have also been known to feast on unÎ¯corns, though the outrÃ© nature of their flesh makes this a dangerous prospect.

The Pathological UnÎ¯corn; the beast of malevolent complexity
Though similar in appearance to the common unÎ¯corn, the pathological unÎ¯corn appears to also draw some heritage from other sources. It has characteristics that resemble the nightmare and its phased sections, mane and tail are composed of self-repeating whorls that resemble fire or sea foam.
Unlike his common cousin, the pathological unÎ¯corn is a malevolent creature that gathers cults and spreads plague and madness. They are most often found skulking about settlements either called by or gathering a cult about them. Once ensconced they will use their position to accumulate influence. Their touch and mere presence slowly spreads insanity and contagion, and their minions, once broken, carry disease to the rest of the populace. This unÎ¯corn is a methodical planner and their schemes will often take decades to reach fruition, leaving the surrounding area poisoned and the populace diseased maniacs.
Though most often found as a mastermind, these creatures will serve masters who are powerful enough to cow them into submission and prevent their escape, or whose agendas align with their own.

The Transcendental UnÎ¯corn; the beast of immortal creativity
The transcendental unÎ¯cornÂ  appears to have some divine heritage. Their coat is white and they have mane, tail and transitions that appear to stream off to the horizon. They are often servants of higher powers or powerful faithful and will sometimes respond to summons or appeals relating to travel (although they are just as dangerous to ride as their common cousins) or repair.
This variant has a powerful magic aura that slowly changes and vivifies everything around it. Changes will usually be benign and are usually aesthetically pleasing. Short exposure will leave things slightly repaired or more robust and very subtly changed. Long term, the aura will cause more drastic differences and animation. Plants and simple objects will often become crude constructs capable of some movement and animal level thought. Animals and more complex objects may achieve limited sentience. Corpses have even been known to animate with full, though original, faculties. Changes and repairs wrought by this effect are permanent, but the vivification is not except in cases of extreme exposure.
A breed of transcendental unÎ¯corns with more powerful auras can be found in the service of chaos gods. These fickle beings quickly mutate and animate their surroundings with much more unpredictable results.