Last week, Longtooth Studios started shipping their newÂ  Battle Graph Dry Erase Boards (aka Battle Boards). The successor to Tact-Tiles, the Battle Boards are a set of interlocking, dry-erase, map tiles. They are an alternative to the venerable Battlemat, and today, I am going to take a set of Battle Boards out for spin, and let you know how they stack up.

A quick disclaimer:Â  Longtooth Studios provided the Gnomes with a single set of Battle Boards, and after a excruciating round of Gnomish Spin The Bottle (don’t ask), the Battle Boards were mine to review. 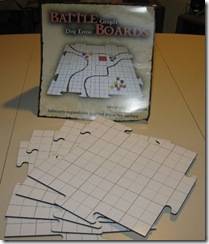 he boards are 11” by 11” and have two tabs and two slots on each tile. They have a 1 inch grid scored into the surface.

The packaging is a simple plastic bag containing the 4 tiles and a single sheet of paper that contains instructions for their use.

The boards have a sturdy feel to them; they feel solid when you pick them up. The edges are clean, and the tiles lock together with ease. The scoring on the grid is sharp and clean.

When the four tiles are arranged in a 2×2 square, the grid that is formed is just a bit smaller than a small Battlemat. 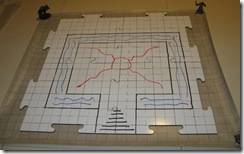 The 4-tile square is 19Â  one inch squares by 20 one inch squares, or in D&D terms:Â  95’ x 100’. This size a great for mapping one large room, but you are going to want a second set of tiles to be able to lay tiles down as your party moves through the dungeon.

So, aÂ  Battlemat is just a bit larger than the Battle Boards, but the real difference between the two comes when you need to pack both of them up to take them to your game. My Battlemat gets rolled up and put into a small mailing tube. The Battle Boards stack neatly upon one another and would easily fit in a backpack. 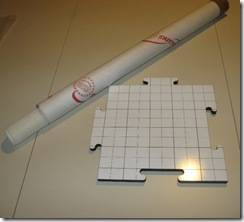 To get a feel for how thick the tiles are, I stacked the 4 tiles up next to my 3.5 Players Handbook. As you can see below the tiles are about 3/4 the thickness of a PHBÂ  and won’t take up much more space than another hardcover book when you stow them in your backpack.

Taking The Boards Out For A Spin

Now that the tiles are on the table, how do they play? I broke out some dry erase markers and some of my miniatures. One of the things that I really like about the boards is that they are white, so all the colors of dry erase makers really showed up nicely. 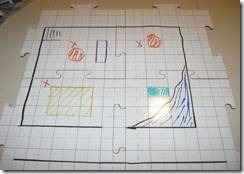 In addition, the scoring on the boards made drawing straight lines quite easy. The marker dropped into the groove of the score and helped me to make straight lines. On my Battlemat, my lines are often wavy, and a bit messy, so I was pleased to be able to put down such straight lines so easily. Also there is a slight clicking sound that is made as the marker moves across one of the lines, that makes counting squares while you are drawing easier.

The boards erase cleanly with an eraser, without any ghost lines on the surface. However, the dry erase powder falls between the tiles when you erase. I did not discover this until I lifted up the tiles after using them and found the powdery outline of the tiles on the table. Not a big deal, but something to be aware of, depending on where you put your tiles down.

Below are two more action shots of the boards, in two different configurations, showing you just how versatile you can be with just four boards, and some markers. 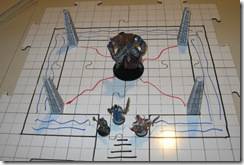 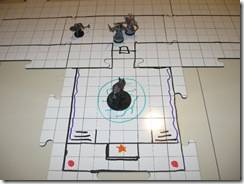 Handle With (some) Care

The Battle Boards are a lot of fun, but they do require some care, and some of that care is worth mentioning.Â  First, the Battle Boards are not sealed on the back. This means that if someone spills their BigGulp on the table, the boards are in danger. Should this happen, you need to dry the bottoms of the boards, ASAP. I don’t consider this a big deal, since my PHB has the same issue, if something spills near it, it is in just as much danger. So bottom line:Â  keep your drinks off the gaming table.

There is a useful movie on YouTube, created by Longtooth, that details the cleaning of the tiles.Â  I recommend watching it before using your tiles for the first time.

Originally, Longtooth was going to produce a cleaner for the tiles, but instead recommends using denatured alcohol to clean the tile surfaces. Even with denatured alcohol, you still need to use it very sparingly. A quart bottle of denatured alcohol goes for about $7 (lowes.com) and can be found at your local hardware store. It would appear that it is no more toxic than dry erase cleaner, but not something you want to fall into the hands of the kids or pets.

The Battle Boards are a really nice product, and one that I would have no problem using at my table. The tiles are well constructed and are worth the $24.99 retail price. The four-pack makes for a decent sized play surface, but you will want four more tiles to really take advantage of cycling tiles while you play. In that case you are going to shell out about $50. Then add another $10 for a bottle of denatured alcohol and some kind of squirt bottle.

The white dry erase surface makes any color marker visible, allowing you to use a variety of colors when drawing.Â  As with any dry erase surface, your lines are going vanish with a stray smudge from your hand or your players’. On the other hand, unlike the Battlemat, you do not need a bottle of water and paper towels to clean off the tiles between encounters; one swipe of your dry erase eraser, and you are ready to start mapping again.

The tiles are solid but not indestructible. They are sensitive to spills around the table, so you are going to want to be a bit more careful with beverages, than with a Battlemat. The scored surface is a double edge blade, on the one hand, it’s a neat and clean grid that actually assists drawing on it. On the other hand, the scored surface requires some special care and handling.

The Battle Boards are a versatile tool for your game table. The ability arrange and re-arrange your tiles as you need them is extremely useful. The tiles are easy to set up and can be transported easily in a backpack. So, if you missed the Tact-Tiles craze a few years ago, then head over to Longtooth and pick up some Battle Boards.