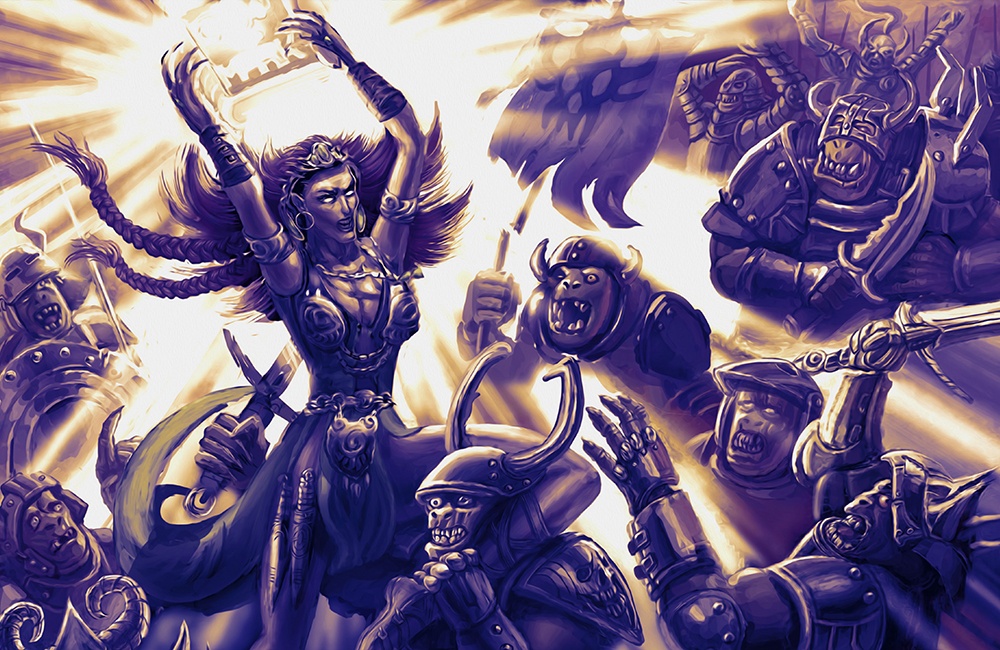 Today I decided to stick with D&D and grabbed two very iconic monsters from its monster manual. Even though they are classic in D&D, both dragons and orcs have been seen in many other settings, which make them great for these system-agnostic sorts of articles! How can we make a metallic dragon interesting and willing to cooperate or to make a combo with a group of orcs though? Let’s find out!

If there’s something that’s always been weird for me is how to use metallic dragons from D&D as enemies as they are always considered good at heart. Even though I could always just state that they have evil means, that’s plainly boring, and finding a good enough reason for them to resort towards evil purposes is always more fun for me. Silver dragons do have a unique quality to them: They can shapeshift into humanoids. Orcs are humanoids. Let’s say that this dragon was to infiltrate an orc tribe and demonstrate its power by defeating its leader using its dragon abilities while remaining in its orc form. I know the D&D stat block doesn’t allow for the dragon to keep its abilities while shapeshifted, but this makes the dragon much more interesting… Now you’ve got a dragon as the leader of an orc tribe.

How can we make this good-natured dragon evil though? With the orcs believing its leader to be “The Chosen One” due to its powerful magic, their warlocks do a ritual on her to make the dragon orc even more powerful. This ritual, however, also corrupts the dragon’s mind making it more savage and bloodthirsty like the orcs’ god. Tada! We’ve got our bloodthirsty orc-dragon

Orcs are your classic medieval fantasy villain. With the Monster Combo series, however, I like these creatures to be system agnostic so maybe we can find a good enough substitute. Depending on the system you can replace them with cultists, barbaric humans or aliens, cannibals, or anything you might need for your story. We want them to be scary and have something that makes them unique as they are part of the dragon chieftain clan. Maybe we can have both the dragon-orc and his followers hunt down powerful creatures or destroy civilizations while looking for greater weapons and armor to arm themselves with. For a fantasy setting, orcs with huge pieces of scale as armor is rad!If it’s sci-fi, maybe they use the carapace of a giant worm or some other alien creature, if not metallic parts stolen from a megacorporation. Want to go nastier for a Lovecraftian horror grop of enemies? Make the orcs be human cannibals that removed the scales from the silver dragon for their armor. Now the shapeshifted dragon has all sorts of bruises in its body.

Orcs are often associated with savagery but they don’t all have to be that way. The Eyes of Gruumsh from D&D are a great example of soldiers you could throw into the mix. Maybe one of these orcs is a mad tactician, or an intellectual sorcerer that creates vials for the orcs to explode on their death-causing something similar to the dragon’s breath weapon to surge from its dying body affecting all those around it. There’s a lot to play with!

We’ve thrown in some ideas, but let’s jump a bit into specifics. This dragon-orc can use its dragon abilities while shapeshifted. It has a paralyzing breath weapon as well as a cold one. It might be cool to have the dragon throw this breath attacks out of its hands or dealing that damage/effect when punching their enemies. A great description of the attack can make all the difference. What about flying, though? An orc doesn’t have wings, and even though we could make it just float it might feel weird. If you find a way to make it work in your setting, make sure to give that ability to the dragon-orc, but making it not fly is just fine and gives a reason for the dragon to want to drop the orc form. Lastly, the corruption might give some extra abilities to this dragon. You can steal the shadow dragon’s breath or make it poisonous/necrotic instead of its classic damage type to change it a bit, and give it an extra melee attack once its hp drops below half of it.

As regards the orcs, depending on the pieces of armor and/or weapons you give them the orcs abilities and defense can change greatly. These may have jetpacks to fly along the dragon-orc, giant swords with blades made out of dragon fangs or maybe they get some sort of bloodlust ability when they hear the dragon roar. Plan out all the things you want your ancient silver dragon to be able to do and think of ways a simple orc or cannibal could have something like that.

I believe that this kind of story we created about the orcs getting armor or weapons to be stronger can make for a great and interesting narrative. If you are planning to introduce this monster combo I would go with letting the players characters know beforehand that this group of powerful orcs is planning to raid a specific place. If you are on a fantasy world maybe this monster combo is after an ancient dragon known for being the protector of an elven town near the forest. For a superhero game, on the other hand, a dragon shapeshifted into a mafia boss could be raiding a science lab with his group of cultist goons to steal a secret radioactive formula. Wanna go cyberpunk? I can imagine the dragon being some kind of hyper futuristic robot, and having a megacorporation approach the PCs to protect their company from “The dragon” as the people keep calling this machine. The orcs? They are cyborg people looking to replace all their body parts with the best pieces of machinery.

Having decided which place our monster combo will be raiding/attacking/stealing from, now we need to decide how much information this place is going to give to our PCs, as well as the structure of the place. Was this location designed to be easily defended? Is it just a shop that can be easily stolen from without much security? Is someone else besides the player characters willing to risk their life to protect what the raid party is trying to get to?

Offering your players a map of the location, some things that can be used to make defending the place easier, and some NPC groups that can be ordered to do something in exchange for coin or a favor. If playing on a modern or futuristic game, having access to the cameras that show the entire place can greatly change how the characters behave. Make sure to add in tons of different elements for the PCs to interact with to have a greater chance on defeating this group!

What do you think of this monster combo? Are you eager to try it out? Did it spark some new idea in your mind? Whatever it is, be sure to share in the comments below! Maybe your great idea of the place the dragon tribe will be raiding can be used by someone else as well, and I always love reading your imaginative ideas!Â