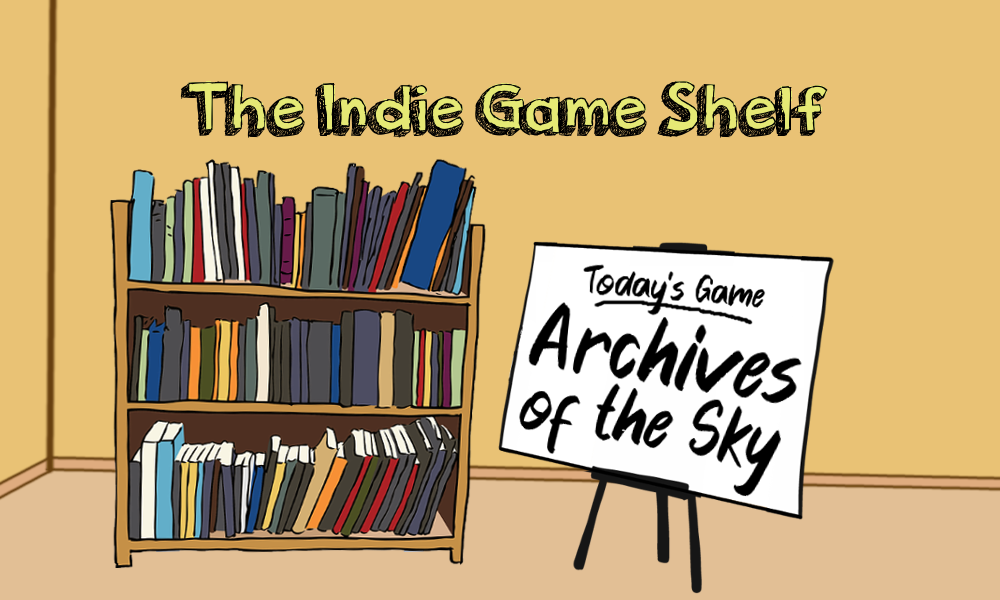 Archives of the Sky: A Tabletop Storygame of Galactic Scope and Threatened Ideals 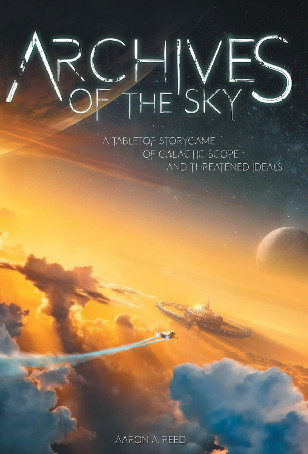 Archives of the Sky [1], by Aaron A. Reed [2], is a diceless (with an asterisk) and GMless (also with an asterisk) roleplaying storygame designed for 3 to 6 players to explore the lives of a group of galactic wanderers in the far future dedicated to their ideals and making decisions that challenge those ideals. Though diceless, some amount of randomization is still introduced with a deck of concepts that is constructed by the players, and though strictly speaking GMless in the sense that narrative control is shared among the players, the game still employs a strong facilitator role (the Archivist). The game is tightly structured and is suitable for both one-shot and campaign-length play. The mechanics of the game make liberal use of a few tokens, some handouts, and lots of index cards. It is also recommended to include for each player an epic sci-fi novel from which to draw keywords that will be used to construct a collection of words to be used as the game’s randomizer.

The default setting of Archives of the Sky is a million years into the future of a spacefaring humanity. I use the term “setting” loosely, as there is no particular prescribed environment and few setting elements innate to the game’s fiction. The broad description of the game world provides a backdrop of epic scale while the gameplay itself focuses on the very personal stories of a handful of inhabitants of that vast world. What is key to the game’s setup is that the characters are all human (whatever that may mean a million years from now), and that travel throughout the galaxy is a long process. The core of the game involves the characters facing difficult situations and tough decisions, and the restriction imposed by the backdrop is essentially that they can’t effectively call for help.

The characters all belong to a House which is driven by an overarching purpose and behaves according to some strict, broad principles. In addition, each individual character also adheres to some explicit principles. As the characters make their way through the world, they encounter situations which force them to confront and examine these principles; all situations in play will eventually lead to a decision that must be made effectively choosing between two Values. Some kind of consensus must be reached so that action can be taken to address the problem, but every action runs the risk of violating a principle, and the results of that action then impacts the characters and may change their relationships to the House, their Values, and each other.

Each session of Archives of the Sky deals with the characters encountering and making a tough decision that challenges two of the Values to which they try to adhere. In one-shot play, or in the first session of an ongoing campaign, the first portion of the session is dedicated to the setup of the characters and their world.

Game setup, like all of Archives of the Sky, is a strongly structured process. The first step is the creation of a “Trove,” a deck of cards custom-made by the players that will serve as the game’s randomizer. Each card in the deck consists of a single, evocative, theme-appropriate word selected by a player. The game recommends that these words be chosen from a genre-appropriate novel, but the game text also includes lists of words that can be drawn from instead. In the same way that a collaboratively built fictional world will be unique to each group, the collaboratively built Trove will be just as unique, making the game’s randomization mechanic just as customized to each individual table as the setting and the characters.

…The collaboratively built Trove [makes] the game’s randomization mechanic just as customized to each individual table as the setting and the characters.
Share13 [3]
Tweet10 [4]
Reddit1 [5]
Email [6]
Once the Trove is constructed, the players work together to design the characters’ House, some collection or faction of humanity to which the characters all belong (and of which they only make up a small part; the House is much bigger than just the party). The House begins with a very simple statement of purpose Value (like “we explore”) and a fixed Value of “we will always remain human.” Players then come up with three further setting elements called Others, which are epic forces they will encounter over the course of the story. The Others consist of a new Ally, an old Opponent, and a growing Mystery. These forces will describe the initial conditions of the first story, though the collection of galactic forces can certainly grow and change over the course of the game. The House is then completed with two additional Values and a name. Characters in Archives of the Sky consist mechanically of a name, a role, and two personal Values. Once the characters are established, game setup is complete.

The story portion of the session (the Episode) then begins, and players take turns acting as the Narrator, which is separate from the Archivist, the game’s facilitator. The Archivist remains the Archivist for the duration of the game, while the Narrator position rotates from turn to turn. It is the Narrator’s job to pose a Question and establish a Scene in order to address that question. In addition to the Narrator, two additional roles of the Epic and the Intimate are assumed by other players. While the Scene is being roleplayed, it is the job of the Epic to make sure the scale of the story remains appropriately grand and the job of the Intimate to make sure it remains appropriately personal. After a Scene ends, the players spend some time Reflecting on what has happened, allowing for out-of-character reactions and possibly driving future Questions and Scenes. Scenes are ideally on the short side, perhaps just several minutes each, and play continues with the Narrator role rotating around the table and new Epics and Intimates being chosen.

As turns and Scenes continue, the Archivist is working with the other players toward assembling a Dilemma, a choice that must ultimately be made between two courses of action, where each action threatens one of the Values in the game, either a House Value or a Value of one of the characters. Once the Dilemma is constructed, the players attempt to reach a consensus about which action to take in a series of additional narrative turns. Once consensus is reached (or a mechanic is invoked called “Force Our Hand”), the decision is made, action is taken, and the outcome is decided in a couple of additional turns. At the end of the Episode, a final scene ends the story, and the characters must then deal with the consequences of having made a decision which threatens one of their Values. Depending on the success or failure of the characters’ action and the disposition of the affected Value, some number of characters then Adapt, either discarding or strengthening their relationship to an existing Value.

What strikes me most about this game is the amount of structure built around the larger storytelling goal. Even the most freeform roleplaying parts, the Scenes, are recommended to be kept to five or six minutes each and are all focused on specific questions that are asked as part of the game mechanics. In this way, the game leaves a tremendous amount of room for creativity as far as the setting goes while being very controlled and prescriptive about not only what kind of story gets told but how it gets told.

The amount of structure and moving parts can make it seem like there is a lot to manage when facilitating and playing Archives of the Sky, but the text provides quite a lot of support and makes the game easy to approach and play. The book includes an extensive amount of advice for facilitating the game, a Quickstart Guide for getting the table up and running, and a Fast Play Mode that explains how one can make use of prep work to speed up the game setup. In addition, the text provides a nice collection of story ideas and prompts, example names, and the aforementioned lists of possible Trove words to be used instead of pulling words from novels. All of this is in addition to an abundance of helpful examples in the main text for things like Values, Roles, and other items that make up the mechanical pieces of the game world.

There is also an introductory section on table safety owing to the notion that this game focuses specifically on having to make uncomfortable decisions. The safety section is brief, but it explicitly calls out the X-Card [7] and “Safe Hearts” [8] and explains the importance for regarding people’s comfort during play.

Finally, because the mechanisms of the game are focused so much on the nuts and bolts of the fiction, it can sometimes feel like the setting is left behind. The game text, however, further includes not only notes on what are the important setting elements that keep alternate settings in line with the game mechanics, but also several examples of alternate settings for the game, as well.

As a whole, this game presents a strong framework for collaborative storytelling plus everything you need to not only play the game as written, but to make it your own with a minimum of design guesswork.

There is a free version [9] of this game available for download, and the full version of Archives of the Sky [1] is available in print and PDF, both from DriveThruRPG. The structure of play and the physicality of Archives of the Sky put me in mind immediately of Dialect [10] (Thorny Games) (a game also covered [11] in a previous Indie Game Shelf installment), which has a similar dedication to procedure and also generates a nice tableful of index cards by the end, though the two games generate very different kinds of fiction. Thematically, I liken Archives of the Sky to games like Vow of Honor [12] (Sigil Stone Publishing) and Flotsam: Adrift Amongst the Stars [13] (Black Armada), both of which also use a future sci-fi lens to view examinations of personal values. Lastly, if you’re interested in more work by this designer, check out Downcrawl [14], a procedural hexcrawl generator for a vast, underground world (which also has a free version [15] available as well as the full version [14]).