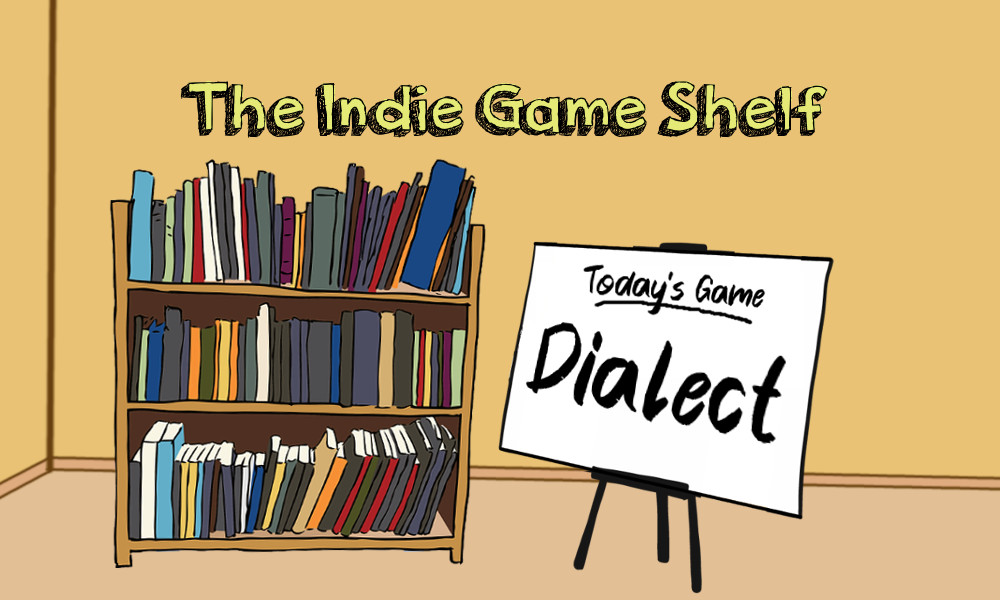 Dialect: A Game About Language and How It Dies 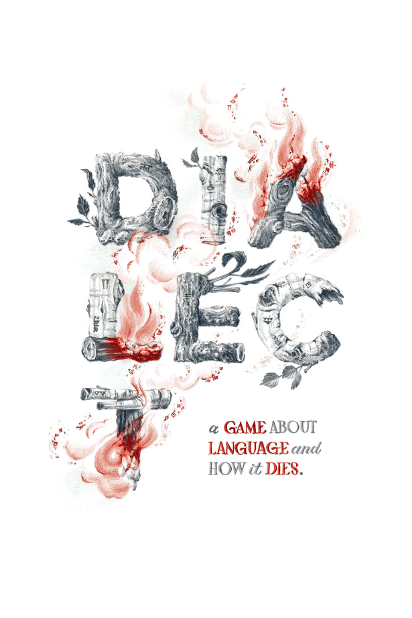 Dialect by Kathryn Hymes and Hakan Seyalioglu (Thorny Games) is a GMless(-ish) roleplaying story game designed for 3 to 5 players to explore the story of a community’s rise and fall in a one-shot session. The story is told from the points of view of specific, persistent characters and uses the community’s own unique branch of language to tell the tale. The game is, if not wholly card-based, then at least card-driven, and it requires both the core game rules and a special deck of cards used throughout play.

There is a caveat attached previously to the term “GMless” because although the structure and mechanisms of the game do not distinguish between different player roles, the game does ask one player to act as “Facilitator” to clarify rules, maintain order during play, and adjudicate at the table if needed. The role is logistical, however–truly earning the moniker “Facilitator”–and does not confer special narrative authority.

Dialect is, as the text itself makes explicit, a game about language. More specifically, it examines the development of a unique regional language form (the titular “dialect”) and its eventual extinction. The textual content of the game’s story is of a particular community or segment of a larger society that has been separated from its parent culture, but the game also provides for examination of what is lost when a language dies. The specifics of the setting are not dictated by the game and are decided upon as the first steps of play of each session (with each session of Dialect designed to tell a self-contained story). Players do also each create and play their own characters in this setting to tell the community’s story.

The arc of a session of Dialect spans the birth and death of an isolated community. Over the course of this story, a unique language is created piece by piece by players adding words and phrases to the characters’ shared vocabulary that only they understand. Roleplaying scenes make use of these new words to explore characters’ relationships with the community and each other. The story arc is divided into “ages,” and the transitions between ages also explore the way in which the community itself changes over time. Finally, the endgame examines the end of the community, the death of its language, and the implications of both to the outside world.

The frameworks for the settings in Dialect are outlined in structured playsets called Backdrops. While each Backdrop provides some information about the setting a session of Dialect will take place in, much of what the Backdrop offers are questions to be answered during the game, so even two games of Dialect using the same Backdrop are likely to turn out very differently. Even so, four core Backdrops and a dozen more contributed Backdrops are available in the core rules. In addition, Backdrops adhere to an easy-to-follow structure, and there is an entire appendix in the rules to guide you to constructing your own, so there is no shortage of ways different sessions of Dialect can be played.

At the start of a session, the players collaboratively come up with three Aspects, two of which are guided by the Backdrop and one of which is completely open-ended. The Backdrop also provides a series of Community Questions which further guide the players in explaining more detailed characteristics of the completed setting, called an Isolation. It is in this Isolation that the story of a session of Dialect takes place.

Sharing a story with others is what roleplaying games are all about, but sharing a unique language with others is what makes this game truly stand out.
Once the Isolation is created and named, each player then creates their own character for the story. Character creation involves choosing an Archetype card provided in the game deck. The Archetype provides brief prompts describing the character’s role in the community, how community members regard them, and the character’s relationships to various Aspects of the Isolation.

While the creation of the Isolation and the Characters form the setup of the session, the core loop of the game involves the creation of words and use of them in character conversations. The story told in a session of Dialect is divided into three Ages, and each Age is divided into Turns. In each Turn, a player Makes a Connection by relating a Language Card from their hand to one of the Isolation’s Aspects. The Language Card generally prompts by supplying an object, event, concept, or some other item for which the community will develop new language. Collaboratively, a new word is constructed to fulfill this linguistic need, and then a conversation is held between characters, again prompted by the Language Card. Some Language Cards may be special Action Cards that modify this usual mode of play. For example, special actions may include coming up with a nickname for someone, narrowing or expanding a word’s meaning, or even a player coming up with a new word on their own using special rules. Action Cards are, however, still followed by an in-character conversation using that turn’s new word. Throughout gameplay, words and information about the Isolation are recorded and arranged in a Language Tableau, a common area assembled from index cards that represents the culture of the Isolation and how it has evolved.

As the story progresses from Age to Age, the Backdrop provides information and questions for the players to answer about how the Isolation is changing. Each Backdrop includes two Pathways, each of which guides a different story about the community’s rise and fall. As play proceeds, one of these Pathways is followed through the Backdrop, and the story of the Isolation proceeds as the Backdrop prompts are answered by the players. Language Cards are also keyed to different Ages in the story, so as play continues, the selection of possible Language Cards also changes to reflect the Isolation’s approaching end. After the third and final Age, Legacy Cards have players choose a prompt on which to base an Epilogue they narrate about the Isolation’s impact on the world at large.

I’m including a special additional section to this edition of The Indie Game Shelf to share a little more information about what this game book contains besides, well, a game. In support of the game itself, besides the aforementioned instructions for constructing a custom Backdrop, there is also a quite comprehensive guide to inventing completely new words from scratch without using an existing language as a base. There is also an entire chapter devoted to actions and exercises designed to foster sustaining languages in our own world, including other games you can play!

I personally find the book a delight. It features a crisp, striking layout and attractive and evocative full-page art pieces between sections. Rules explanations are supplemented with easy-to-follow play examples and illustrations, and it is clear that in addition to the game rules, the designers also put a lot of thought into the play culture and safety they think will result in the best experiences with this game.

Finally, playing the game adds a little something more than the usual exciting stories and fond memories that come from most roleplaying games. The act of constructing and sharing a whole new language creates not only a unique play experience with each session but also something special that continues to link players to each other long after the game session is over. Sharing a story with others is what roleplaying games are all about, but sharing a unique language with others is what makes this game truly stand out.

Dialect is available from Thorny Games in digital format as well as in both standard and deluxe physical form. Dialect is a terrific and unique game; so much so that I have difficulty listing similar titles to explore. The designers are trained linguists, and so for games along similar themes to Dialect, I heartily recommend checking out the rest of the Thorny Games catalog, which includes Sign, a parlor LARP in which players do not speak and invent a whole new form of sign language, and the upcoming Xenolanguage, a game of deciphering an alien language and how that experience changes how you see the world.