Your Dungeon’s Bromance with Graffiti

Think back to the scenery from the last public restroom you frequented.Â  Chances are you were treated to a visual smorgasbord of human expression. In that 15 minutes or so, you were probably exposed to more poetry, art, comedy gold and political satire than you were for the rest of the week (if you’re a social recluse like me anyway).

People graffiti whenever they have sufficient motivation and feel the chance of being punished is slim (or the reward is worth it).Â  Thus, in the dungeon environment, the average adventurer would likely scrawl to his heart’s content whenever he felt the urge. (The Left for Dead video game series does this exceptionally well.)Â  Many dungeons are unowned by any authority PCs recognize, meaning there’s no reprisal for scribbling on the walls a bit, and even in the cases where there’s someone with a claim to the place, it’s unlikely they’re in any position to determine the identity of the culprit unless you make a habit of signing your work.Â  True, the party paladin is unlikely to deface owned property, but even sir stick in the mud can’t object to a warning of danger to those who follow or a trail to indicate the way back to safety.

Therefore, assuming a reasonable number of adventurers in your setting or the presence of similarly unruly ruffians (goblins, bandits, and the like) graffiti should be a constant presence in your dungeons. Graffiti tends to follow a handful of types, each with it’s own uses: 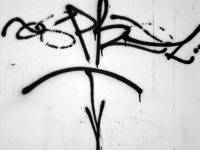 Tagging to claim ownership or simply to indicate that someone made it to a certain area is a common form of graffiti. Tribes, gangs and other organizations often tag to indicate the extent of their territory, and adventurers often place their personal symbols or signatures in dangerous or hard to reach locations. Tags can help to give not-so-subtle clues, mark dangerous areas, or introduce NPCs or organizations.Â  Skills that allow for knowledge of local groups or history can be expanded to recognize tags, and discovering the identity of an obscure tag can be the source of an adventure all it’s own.

Puzzle Hints and Notes:
Chances are if other adventurers have been here before, your characters are not the first ones to take a crack at the puzzle you have lined up for them, so it wouldn’t be unusual to find another group’s notes scribbled on the wall nearby. Obviously they didn’t get it right, but there’s nothing saying their work won’t be helpful to those who come after them.Â  Or just maybe the notes were made by complete boneheads or designed to intentionally mislead others. Your group will have to decide for themselves.

Dungeons are full of dangerous traps and deadly creatures andÂ  plenty of groups will label these locations to prevent themselves and others from unintentionally stumbling into them. Of course, dungeon dwellers themselves may make these tags to steer adventurers away from or towards their own lairs, into death traps, or towards rivals. Again, there’s probably a skill that can be pressed into service to help identify if these markings are legitimate or not, but even if warnings were posted honestly, there’s no telling if dungeon topography and boundaries have chanced since they were made.

Directions:
This is the reason that every adventurer’s kit contains a stick of chalk or charcoal. Marking the way out of the dungeon or the way to locations of interest is a great way to keep from getting lost without the tedium of mapping.Â  This technique is also great for the split party, as each group can follow the other’s marks to find their companions.Â  Of course it goes without saying that marking your path through a dungeon also makes it simple for intelligent foes to track you down or set ambushes.

Bragging:
Some adventurers simply can’t resist bragging about how many orcs they killed, the traps they disarmed, puzzles they solved, or the rooms they got to first. Most groups have seen rivalries of this nature between PCs from time to time. With graffiti, the PCs can compete against NPCs as well.

If you need to leave a note for those who follow, what better way of making sure they get the message than writing it on the wall in foot high letters?Â  Changes in plans, general information, political statements, or hell, coming out of the closet or just your grocery list.

Jokes, Commentary, Memes and Other Fun:
And sometimes graffiti is just for fun, nonsense, in jokes or a cultural thing. This is a good way for your players to blow off steam (“Check it out guys, I painted a mule in drag on the chief’s tent!”), as comic relief, or even to insert a sense of culture (admittedly, not high culture) into your world.

6 Responses to Your Dungeon’s Bromance with Graffiti