What do you get when you combine Spies, Supernatural Horror, Crunchy bits, a secret organization, and the Fast, Furious, and Fun rules of Savage Worlds? You get Agents of Oblivion: part setting, part toolbox, and part rulebook, in all the best ways possible. Are you ready for your briefing now, Agent?

NOTE- This is the first of two reviews I will do post-Gen Con. The second, Shadows of Esteren, is still a bit off as I am reading the entire book and playing it before I review it.

Before we get started, let me confess a few minor things. First, I bought Agents of Oblivion for my own Espionage/Horror campaign that I have begun to run. So I had an interest in the book before I picked it up, and I will do my best to keep my bias in check. Two, I purchased AoO on my own; this is not a review copy. Three, when this book first came out I was annoyed with the idea of another Espionage book being mixed with Horror, rather than a pure espionage book. I am happy to say that I have reversed my position on that, based on the book. 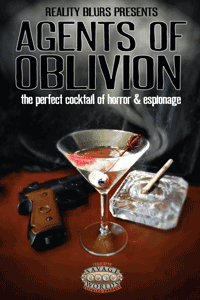 Lets run down some facts about the book. Its a 6×9 softcover coming in at 225 pages. The book is single column with a simple layout. The artwork is a combination of black and white line art and word clouds. Compared to Realms of Cthulthu also by Reality Blurs, this book is sparse on artwork. That said, what artwork there is, is good and fitting for the book and setting. In 6×9 format I like a more simple layout, and this book reads fast.

Whats Between The Covers?

In 225 pages, Reality Blurs packs a lot of goodness into this small book. This is far more than a just setting book, and so its really best to break it up into three sections to talk about it: Rules, Setting, and Toolkit.

As with most Savage Worlds setting books there are some rules specific for this setting. This includes a few new Skills which take the Savage Worlds rules from its default Pulp setting to a more modern setting, allowing for Hacking and other espionage activities. There are also a number of new Edges and Hindrances that add detail to the setting. There are also several setting rules that change the way magic works to fit with the setting.

There are two other rules that are great additions to Agents of Oblivion, that can be easily ported into other Savage Worlds games. The first is the Extended Trait Check (ETC), which allows for setting up multi-success, timed checks. A great tool for when your player needs to disarm a bomb while the clock is ticking, or hacking a computer to disarm a launch code.

The other is the Resource Management rules, which do a great job of handling equipment in settings where gear is given to players from an organization for mission-like adventures. This system uses resource points that the player trades for standard equipment, perks, single use devices (temporary powers),and spy tech/special trainings (temporary Edges). This system gives the feel of a visit to Q.

I mentioned above there were some new Skills, Edges & Hindrances, as well as some setting rules. These all play into the default setting which centers around the good agency, Oblivion, and their nemesis, Pandora; both engaged in a supernatural war of shadows.

The book gives a history of the world as well as the history for both Oblivion and Pandora. It is not to the depth of the history of the world of Conspiracy X. There is enough depth to understand the groups and their motivations, and then enough space to fill in any details you like. There are also details for a number of other agencies around the world, covering some known conspiracy groups and some new ones, as well as number of NPC stat blocks, both generic and for the plots included.

No Savage Worlds setting book would be complete without some adventures to run. Agents of Oblivion does not use the traditional Savage Worlds plot point format, but does provide seven adventure plots that you can run for your players.

AoO also provides you the means to set up your own Espionage campaign. It starts with a set of Campaign Thematic Factors: Alien, Conspiracy, Horror, Occult, Technology and levels for each from None to High. By setting the levels for each of the factors, you can create a thematic framework for espionage settings from the Bourne Identity through the X-Files, with room for everything in-between. The AoO campaign has a default setting called The Company Line, which is moderate across all factors, and several other examples are also provided.

Each factor comes with tips about each of the levels and how they would effect your campaign world. A GM can use this tool, in conjunction with their players, to come up with the exact setting they want.

In addition to the information about the Thematic Factors, there is a section of advice for running horror-espionage games. There is also a section of GMing advice and some tips on creating the perfect mission.

Along with all that advice there is a Mission Generator, which allows you to randomly generate mission ideas for your sessions, and a creature generator to help you create those shadowy creatures your Agents are going to run into.

Use Their Setting or Roll Your Own

Agents of Oblivion is a very interesting book. It provides great ideas, some interesting rules, and useful tools. You are not locked into a complex or overly detailed setting, there is room to take the setting and adjust it to your own preferences, while at the same time being provided tools for creating material that fits perfectly within the setting.

For Savage fans who are looking for a totally fleshed out setting and plot points like Necessary Evil or Solomon Kane, this book may feel a bit light; do not discount it. There is more than enough material to get a campaign going with what is in the book, and with the tools provided, more then enough help to keep your game rolling.

There is also a natural, and I suspect intentional, synergy with Reality Blurs’ other Savage Setting Realms of CthulhuÂ (Gnome Stew review). In fact in Realms of Cthulthu there is a reference to a campaign setting called Final Defense, which reads like a Mythos version of Oblivion. There is a Peanut Butter and Chocolate effect between these two books.

On a personal note, here is how I used AoO in my campaign. Years ago, some friends and I came up with our own AoO like setting that was a mix of Men In Black combined with the Black Book from Conspiracy X, an organization and setting we called NOD: National Occult Directorate. We developed it for d20 Modern and later tinkered with True20, but never got it running.

I got AoO with the intent of running it from the book, but quickly realized that I could use all of our NOD setting material, and the toolkit aspects of AoO to make Savage NOD. I kept all the AoO rules, used all the tools in the toolkit, and inserted my setting for theirs. I then dragged elements of Realms of Cthulhu into the setting, and the end result was great.

Agents of Oblivion is my kind of setting book. It is not only a setting with rules to support it, but it takes apart the setting and provides you the tools to customize and tinker with it. At times it feels more like the missing Savage Espionage Companion, and yet the book is totally playable as a full setting.

If you are looking to run a Savage worlds game with any element of espionage from a realistic spy thriller to a supernatural action thriller with agents of Hastur, Agents of Oblivion can power your game.