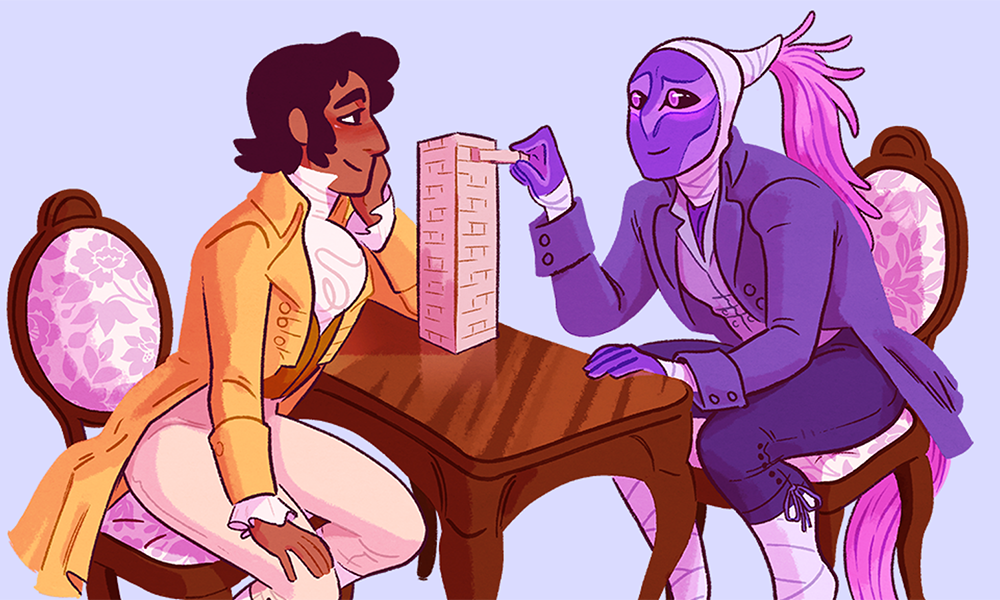 The cover art for Star Crossed. A great game and innovative use of a block tower.

As tabletop RPGs continue to spread like butter on hot toast, scores of people from all sorts of backgrounds find themselves gathered around tables to meet equally estranged strangers. This is especially true for gaming leagues, as well as the summer convention circuits, where many players will join together for a single adventure, only to never meet again.

If you’ve played around in convention games you’ve likely heard of the infamous X-Card, an index card with an X drawn on one side. Whenever a player feels uncomfortable with the subject matter, be it something being said or an in-game event, they can then either tap or raise the card to indicate their discomfort. They do not need to indicate why the subject makes them uncomfortable. The GM, as well as the other players, should then find a way to change or skip through the parts that make them uncomfortable.

As a player-safety tool, you’ll find it the most in pick-up games. However, it’s a fantastic mechanism many Gamemasters old and new can import into their own games. As it’s also part of the creative commons, creators are even able to incorporate it in their tabletop games freely.

Such was the case when I picked up my copy of Star Crossed, a two-person romantic tabletop RPG. I was pleasantly surprised to find a high quality and glossy X-Card included in the game. While I’ve used one in the past, it was a delight to see a commercial game actually include one in their box. Very recently I was even able to sit down with Alex Roberts, the creator of Star Crossed [1] and the upcoming For The Queen [2], and talk about her thoughts on X-Cards.

When the doc around x-cards popped up in 2012 there was a lot of buzz around it. How and when did you first hear about it?

Alex: It would have been a while later than that – 2014, maybe? I wasn’t very plugged into the broader RPG scene; I was just playing with my local group.

What were your first thoughts when you heard about it?

Alex: I was pretty dismissive! It was explained to me as a convenient way to avoid talking about serious topics at the table. I thought, hey, shouldn’t we be using our words? Let’s all be grownups about this! Let’s care for each other a little more proactively than that! It’s easy to dismiss something when you don’t do all your research on it (I hadn’t even seen the X Card document at this point) and when you haven’t been in the contexts where it becomes necessary. I hadn’t yet been in a situation where an X Card would really have helped me. I’ve been there since.

One of the main topics around X-Cards is around editing content and censorship. Do you feel X-Cards limit creative freedom?

Alex: When we’re playing an RPG, we’re creating something with and for each other. All the players are creators and audience in one. It’s pure folk art; that’s what I love about roleplaying. In that context, you work within the needs and desires of your co-creators. Or you deliberately push their limits and ignore their desires I guess? I don’t know why you would want to do that. But yeah I guess the X Card would make that harder.

You have a new game, For The Queen, that deliberately lists x-cards as a game feature. I think that’s really cool, personally, especially since it’s the first I’ve seen to include it as a headlining element. Could I ask your thoughts on listing it there?

Alex: Star Crossed comes with an X Card as well, but in For The Queen it’s integral to how the game is played. Players draw question cards and then answer them, pass them to the next player, or X them out of the game. It actually helps make each playthrough unique. I was in one game with someone who kept X-ing out every question that implied cruelty or violence from the Queen, and it made for a much softer, gentler story that was no less interesting than some of the more brutal ones that can come out of the same game. I honestly believe that tools that help us articulate our desires and limits help us tell more interesting and unique stories. People are more creative when they can let their guard down, I’ve noticed.

Last question: What is your personal, or perhaps preferred, vision for the future landscape of tabletop gaming? Where do you see it going?

Alex: Honestly, for all the pain and frustration I see and experience from this weird little world, I think we’re headed in a good direction. When I see the discussions we’re finally having around labor, profit, power, care, conflict, colonialism, I feel optimistic. And I think it’s crucial to note that most of these conversations have arisen in spaces where BIPOC’s voices are being uplifted and respected more. So I think we should keep at that.

Was there anything else you wanted to say concerning X-Cards?

“I just wanted to have fun. I’m really grateful we had a simple tool that made it easy for me and my friends”

Alex: Can I share a little story? I honestly think it’s more important than anything else I’ve written here.

I was once in a game very shortly after my grandfather passed away. It helped take my mind off of things, I got to connect with friends, and we told a cute and uplifting story together. But during character creation, someone said they were going to be another character’s grandpa. I immediately tapped the X Card and I think everyone was confused, but then another player who knew I was grieving – well you could see the light bulb go off above his head and he suggested an Uncle instead and we moved on!

That first player was completely within the tone and content of the game and offered his character idea with no intention of doing harm. But wow I was not up for talking about a grandfatherly relationship for the next few hours! And I would have explained why but I really didn’t want to do that either. I just wanted to have fun. I’m really grateful we had a simple tool that made it easy for me and my friends to look out for each other.

Thanks for your time, Alex. I really appreciate hearing your thoughts on what I see to be a step towards an overall positive and safe gaming environment.

Alex: Thank you for reaching out!

Despite its positive intent and implications, when talk of X-Cards first popped up in 2012 there was initially a large amount of negative buzz around it. Both players and Gamemasters alike were critical of X-Cards giving players too much power to edit content, even going as far to call using it akin to censorship. Since then, there have been major shifts in the community as a whole. It is long since past the age where tabletop gamers were stereotyped to simply be single, male, and heteronormative hermits that played their games in basements. Now we’re complex, gender- & sexuality-diverse hermits that only sometimes play in basements.

As we move forward in the community we not only need to be able to look at current trends, but we need to plan for the future. We need to shape the community of tabletop RPGs and board games alike with positive checks and balances. This is especially true with settings set in older, less hospitable times. Especially since the highly popular high-fantasy is particularly rampant with uncomfortable topics.

X-Cards, in the end, are a powerful tool allowing safer navigation around complex and often upsetting topics even in unkind settings. Despite this, it’s also important to understand that X-Cards do not absolve responsibility from the GM or the players to be respectful of others; it’s simply a means for the players to healthily assert their own levels of comfort. As we continue to grow as a community of players and content creators, it becomes everyone’s responsibility to enable our own checks and balances over the content of the game.

We’re only at the start of a long climb to the top and I’m excited to see where we go.

You can find the official documentation for X-Cards by John Stavropoulos here: [LINK [3]]
You can also find Alex Roberts’ upcoming game, For the Queen, here: [LINK [2]]