Or, The Saga of UFO Joe

Skipping as much of the stereotypical “in my campaign” braggadocio as possible, I had an unusual NPC in my 1980s monster hunter campaign. He would regularly call in to Art Bell’s “Coast to Coast AM” radio show under different names, but always had a frighteningly accurate synopsis of what the party had just done, and then veer off into crazy UFO conspiracy theories. The party came to call him ‘UFO Joe’. 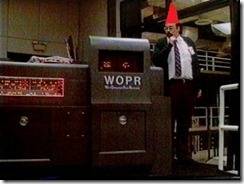 UFO Joe was actually the subconscious conscience of the BBEG, an army general who had been converted to a brain-in-a-jar connected to a Cray-1 supercomputer and the world’s telecommunications network (including telephones, teletype, FAX, and ARPANET). Since the party would be going up against a paranoid genius with near-limitless resources, they could use an ‘inside man’.

The day before the climactic assault on the BBEG’s complex (an offshoot of the Cheyenne Mountain site), I had a brainstorm: Have someone call one of the players on their personal cell phone, and play UFO Joe.

A few complications would need to be cleaned up, but this looked entirely possible. A bit of tweaking and asking for favors led to the somewhat revised approach of having fellow Gnome Patrick Benson call my home phone, and hand it to the players.

The party infiltrated the compound gracefully, but when they went to KO their guard, the dice gods failed them miserably (three attacks failed to knock out a mook). It was go-time, and I needed UFO Joe to get in touch with the party.

We were using Google Talk to communicate in a chat session, but we weren’t aware that we were suffering from serious lag (I was on a cell phone, which may have contributed to it). Patrick was going to use Google Voice to make the call, but apparently Google Voice can’t be used to call numbers while you’re in Google Talk. Patrick switched to his cell number and got through, but the timing was a little off, and lag delayed my last-minute update.

My home phone rang. I handed it to the player whose character held the cell phone, and said “It’s for you.” He gave me a look that pretty much said “What, right here in the middle of a combat?” but when Patrick came on the line and told him to get to the elevators, his jaw dropped. I had him put it on speaker, and Patrick repeated himself. As I looked around the table, every player had that open-mouthed “That was awesome!” grin.

Patrick and I switched to text messages for communication, which was a great decision. We used the phone call again, and it worked well the second time, although it didn’t have the impact of the first.

The game ran extremely late, and I ran to the far end of the house and made one last panicked call myself, screaming that I’d been found out, and that they needed to kill us, before cutting the call short. I returned to a table full of grins.

Despite numerous kinks, this was an extremely effective technique. Getting out of the GM-player rut, and having someone else communicate with the party had an impact.

If you are going to use this technique (and you really should, because the view from the GM’s chair is just too damned good to pass up), here are some pointers.

Obviously, this kind of technique could work with any similar communications system, from walkie-talkies to military field radio to sub-space communications. You could even send text messages or chats to your players, but the effect of another human voice over the phone is hard to beat.

Have you had someone ‘call in’ to a game? Got any thoughts or feedback? Sound off in the comments and let us know!

(Image courtesy of the Internet and MS Paint.)

4 Responses to Would You Like to Phone a Friend?