Where Did We Park? 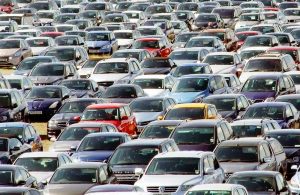 Why did I get a silver car? UGH…

As the GM, it’s can sometimes feel like you’re the only one paying attention to what’s actually happening in the game. You show up to start the next session and no one seems to remember what happened the last time you played, even when you left them hanging on the edge in a cliffhanger. Does this mean the players don’t care? Should you even bother crafting a cohesive game that avoids gaping plot holes? When you ask if anyone remembers what happened last time and you’re met with a table full of blank faces, do you ever think, “Why do I bother?”

It is absolutely frustrating, but the players not remembering details about what happened during the last game is not necessarily a sign of their disinterest. Chances are, if they showed up to play again, they want to be there for more than just snacks and soda. Many of us have busy lives beyond the gaming table. There’s work, significant others, children, bills to pay, fix-it projects, and even favorite TV shows to watch if we’re being honest. Even if we’d like to devote most of our brainpower to a regular game, it’s just not feasible.

There’s also a matter of perspective. As the GM, you’re going to have a far broader view of what’s going on in the game than the players will. You’re responsible for juggling all aspects of the game so the players have an interesting world to explore. While you may know the importance of the relationship between the leader of the merchant’s guild and the local noble house, all the players may remember is the overdressed shop owner’s cute monkey pet. Essentially, what they may remember as being important from the previous session may not always be in line with what you think are the critical points of the game.

So what do you do when you’re trying to weave together an epic game through multiple sessions? How do you avoid those blank stares when you try and pick up from where you left off?

Don’t be afraid to recap. “So, last week you entered the dragon’s lair, freed the hostages and defeated him spectacularly. Unfortunately, a couple minions got away with the artifact.” There’s nothing wrong with giving your players a summary of what happened the last time you played. It helps get everyone on the same page and may remind them of the goals they’re trying to accomplish. Even if they don’t remember specifics, they’ll be quick to correct you if you mention something that doesn’t jive with their slowly returning memories of the last game.

Ask leading questions. “After you found the hidden warehouse where the cult was hiding the bodies of their victims, what were you going to investigate next? The church or the preacher’s last known address?” You’ve probably prepped for the session, so you have an idea of what they were planning. They may need a little nudge in the right direction to remind them what their characters were planning the last time they played.

Jump right into the action. “The moment you open the cargo bay doors, there’s a bunch of mercs laying down heavy fire on the ship. Whoever this is, they’re getting in the way of you reaching that diplomatic hearing in time.” Hey, you know where they were headed and what they were planning. Why not jump right to the action? When done right, nothing gets you into the beating heart of a game quicker than being thrown right into a fight. When the dust settles from the fight, your players can regroup and figure out what to do next and they’ll probably remember a little more about what happened the last time.

Play directly to the PCs. “Jax, lastÂ gameÂ you were in a knockdown, drag out battle with your archenemy, but she got away. Corax, that fight came close to leveling the hospital where your boyfriend works. What’s the plan?” While the players may not remember the exact details of the last session, you can be sure they’ll remember who their character is and what that character’s goals and desires are. If you key in to the specifics of the PCs, it’ll keep them invested in the overarching plot and help keep the momentum of the game going session to session.

I’ve always had a pretty strong memory, so when I’m a player, I’m usually the one spouting off the recap to the rest of the group. As a GM, I’ve learned that my players do care about the game, but sometimes they need a little nudge to remember the specifics. If you’re patient with your players and don’t take their amnesia personally while giving them the hints they need to keep moving forward, you’ll be rewarded. Heck, even if a couple of them remember everything that happened, others might be grateful for the refresher.

As long as you remember where you parked the game, it’s easy enough to get the players on board to get the game moving once more.

8 Responses to Where Did We Park?