The Wheel of Time Turns

And Ages Come and Go, 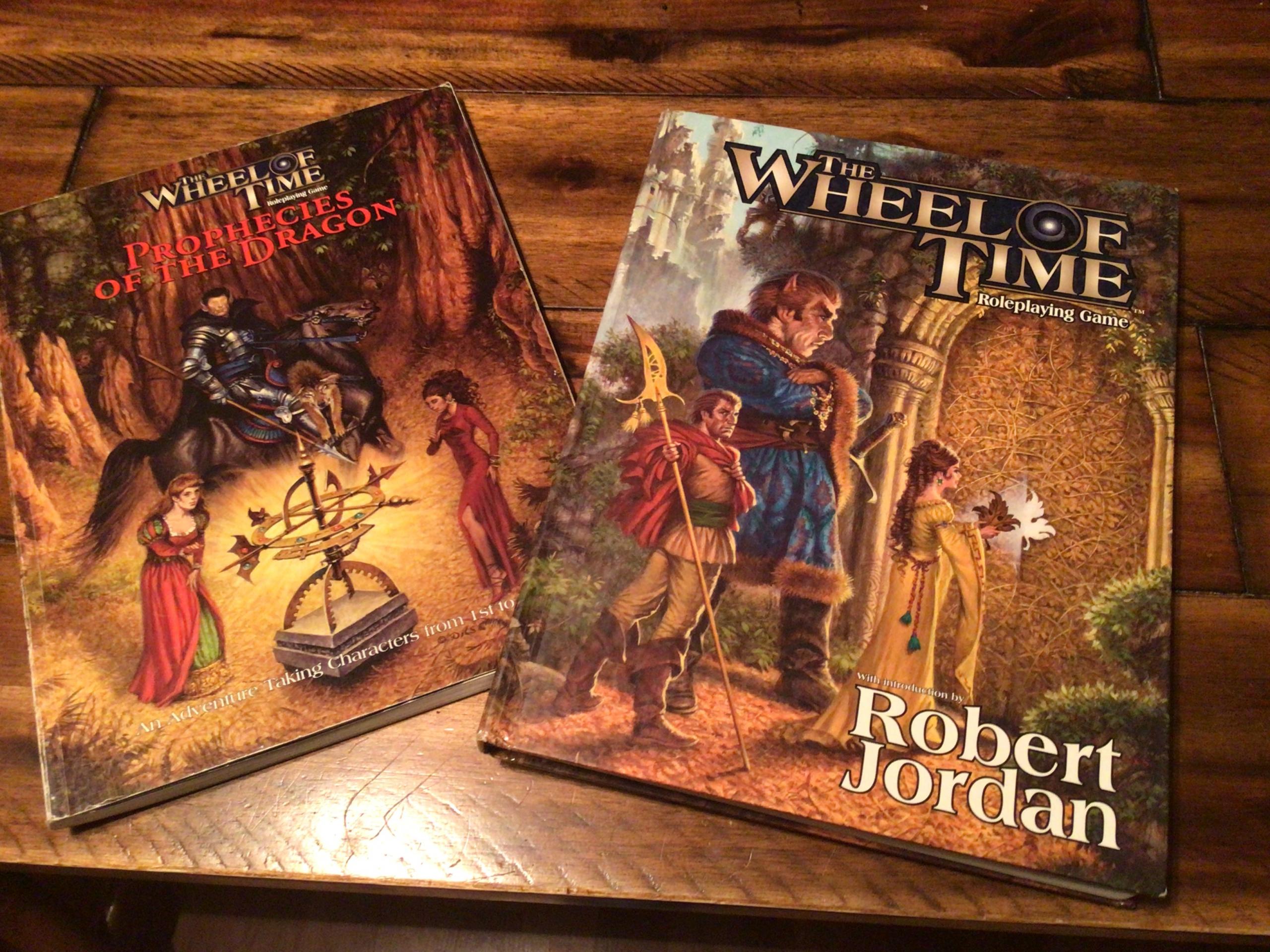 The adventure guide and rulebook for The Wheel of Time Roleplaying Game, c. 2001. Both covers were illustrated by Darrell K. Sweet, who furnished the book covers for 14 books in the Wheel of Time series of novels until his death.

It’s been twenty years since Wizards of the Coast published The Wheel of Time Roleplaying Game — a licensing showpiece for its d20 System.

I had to look at the copyright date of my copy of the game book just to be sure that it had been that long.

But yes, it had. The adage that has since become the series catchphrase — “The Wheel Weaves as the Wheel Wills” — rings true enough, then.

What brings all this to mind, of course, is the fact the 15-book series of epic fantasy is getting the TV series treatment with the debut of “The Wheel of Time” on Nov. 19 on Amazon’s Prime Video.

Test of the d20 System

The Wheel of Time RPG was one of a handful of licensed products at the time demonstrating that the rules governing Third Edition Dungeons & Dragons could be applied to other properties, milieus, and genres — a test run before unveiling its universal magnum opus d20 Modern.

WOTC message boards — anyone remember those? — were running hot with player reaction to the game. Some, like me, felt the game was faithful to the series and emulated most aspects very well. The city maps, in fact, and many illustrations were exceptionally well-done.

Considering that many in the community had for a few years been homebrewing AD&D rules to fit Wheel, it was refreshing to see something that wasn’t a square-peg/round-hole conversion. Now we had a rulebook that used the terminology of the setting. Angreal and Ter’angreal were items of power, not magic items. We had weaves, not spells — even the dreaded Balefire. We had Ogier, Wolfbrothers, Raken and To’raken as well as characters with the Foretelling, and those who were Dreamwalkers!

Most of the criticism settled in on the read that the character build for the Algai’d’siswai was out of sight for a martial character, and more importantly, the One Power magic system was overpowered for gameplay.

The criticisms were valid, if you played the game as if it were a dungeon-delving treasure-looting enterprise — like it seemed so many people on the message boards were trying to do. 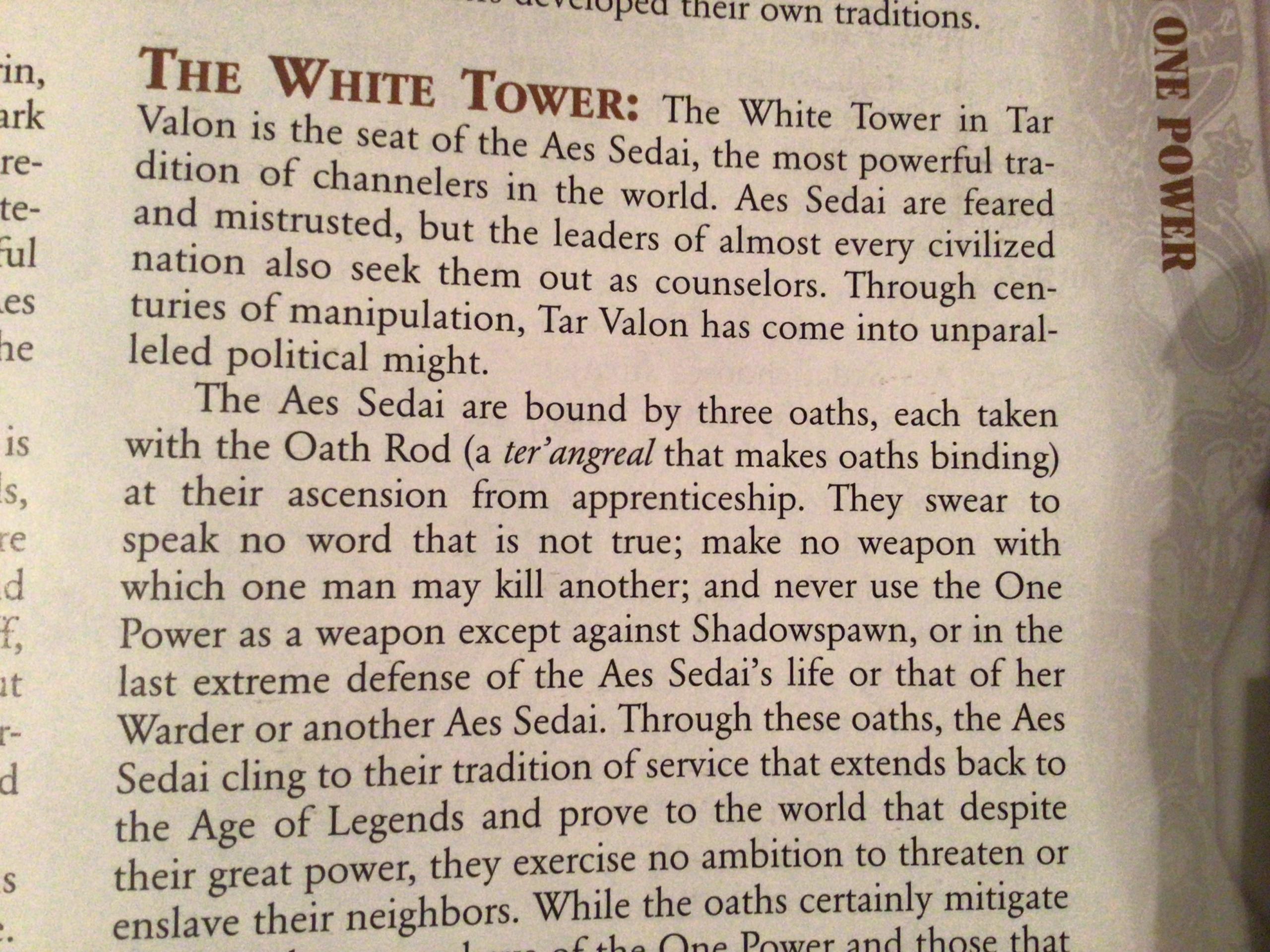 The oft-overlooked aspect of playing a channeler in The Wheel of Time RPG: This section on the three oaths that guide an Aes Sedai’s use of the One Power.

Fans of the series understood that channelling weaves wasn’t like casting magic missile and that encounters in Randland were less about smash’n’grab operations and more like a chess game of moving pieces until Children of the Light, the Aiel, the Red Sisters, the Band of the Red Hand, The Forsaken, darkfriends, trollocs and/or Myrddraal clashed with the player characters.

Playing channelers WAS different than playing wizards. At the time, however, players were chafing at the restrictions rather than embracing them. In that way, the game was way ahead of of its time.

For one, men drew upon saidin (which could drive you mad) and women saidar (which could burn you out) to touch and gather weaves. It was the loss of sanity (until much later, when the taint was cleansed) that should have made the characters compelling to play.

Meanwhile female Aes Sedai restrained their use of the power by taking a vow to adhere to the Three Oaths.

This wasn’t just a pinky promise made with fingers crossed behind your back — as many players seemed to think.

They swear to speak no word that is not true, make no weapon with which one many may kill another; and never use the One Power as a weapon except against Shadowspawn, or in the last defense of an Aes Sedai’s life or that of her Warder.

They take this oath while holding onto the Oath Rod, which binds the vow down to the bone. (And is the reason why the Seanchan can’t make captive Aes Sedai use the power even when leashed by an a’dam.)

Let’s be honest: It takes a special kind of roleplayer to hold their character to that standard night in and night out. That’s especially true if your Aes Sedai is one that never lies, as author Robert Jordan once explained, but the truth she speaks may not be the truth you think you hear.

The only way to raise the RP bar higher is to have a character secretly portray a member of the Black Ajah, meaning they are capable of lying and killing, but mustn’t, because that’s the surest way to be revealed as a darkfriend.

And I haven’t even gotten into the fact that the Aes Sedai belong to separate orders depending on their beliefs, values and measure of service. Suffice to say, members of the Green Ajah like to bash things and marry their warders while the Red Ajah bring male channelers to heel — some out of a sense of duty and some because they like it.

Okay, okay — we’ve dived down pretty deep into the weeds pretty quickly. A few paragraphs in and I’m making your head spin with jargon from the series. And I risk losing you quicker than Tuatha’an in a stedding.

Definitely not my intent. But one’s passion gets the better of us sometimes.

I say all this because despite some of the d20 System’s requisite numbers crunching, the Wheel of Time RPG is a good game. Wilders and initiates cast weaves; armsmen, woodsmen and Algai’d’siswai make war; while nobles and wanderers navigate society’s many tiers, from dicing corners to the corridors of power where daes dae’mar is played for keeps.

And everyone fears the emergence of the true Dragon Reborn — because that will signal the coming of the end of the age and the Last Battle between the forces of light and those of the Dark One. 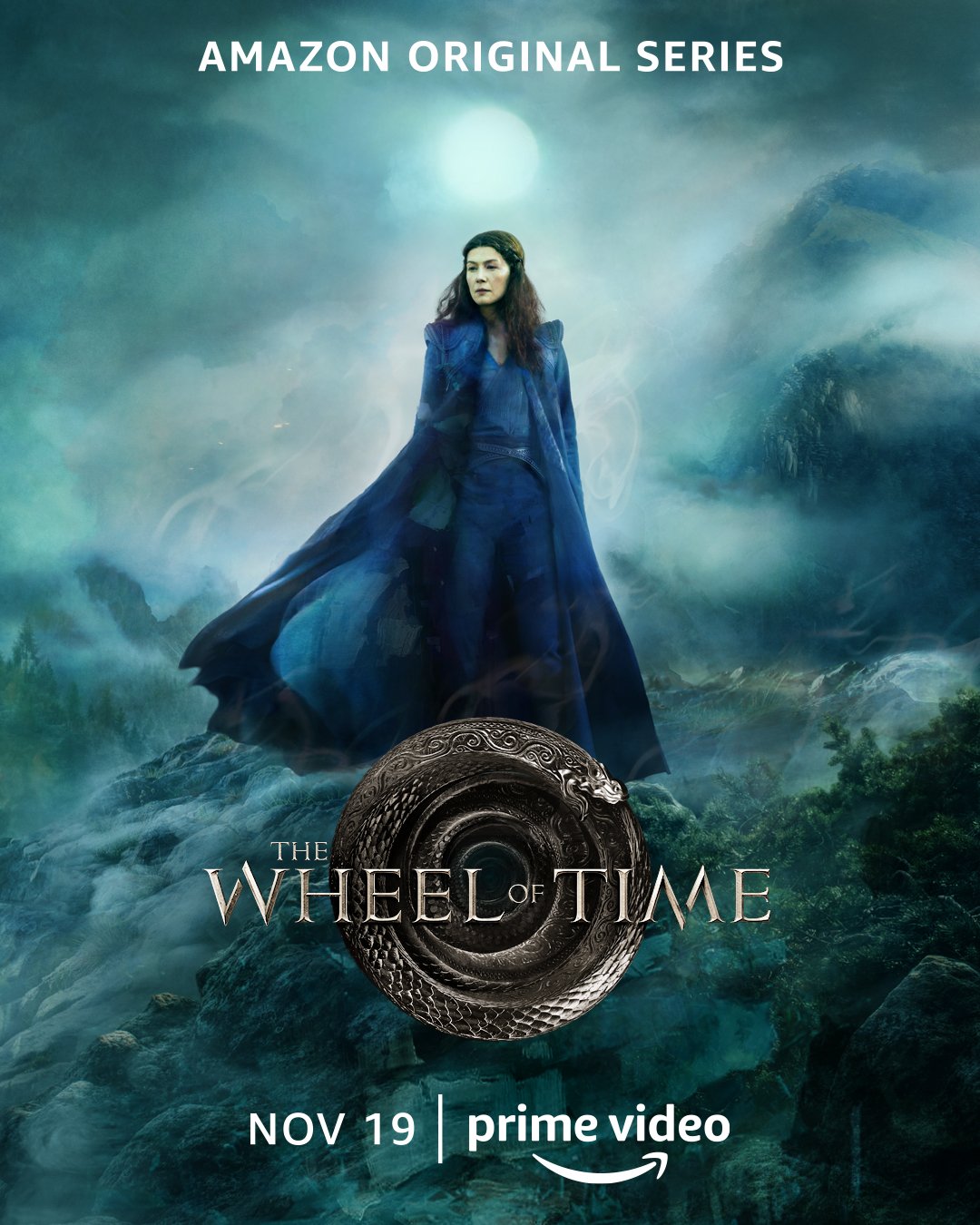 A promotional poster showing Rosamund Pike in the role of Moiraine Damodred, the Aes Sedai on a 20-year quest to find the Dragon Reborn before the Black Ajah does.

I’ve mentioned it already, but one of the constant themes of the series is the tension that exists between restrictions and liberty. Characters deal with restraints, some imposed physically, some societal and some circumstantial. Meanwhile, the Dark One’s operatives are also constrained, but in different ways. The world itself is held in the grip of a never-ending summer that threatens to make the Dark One’s victory all but assured.

How the main characters throw off these various restraints, be they ter’angreal leash or hard-wired tradition — are some of the most poignant moments of the narrative. And there is always some other force occupying the characters’ attention. For example, it’s not enough to find the Bowl of the Winds — an adventure of its own — its use must be negotiated with Sea Folk who have a claim and the ritual must be defended against an assault made by darkfriends and reinforced by Forsaken.

I’m getting ahead of myself again. Really, we should direct our attention to the beginning of the story, or, at least, a beginning — there being no true beginnings or endings to the turning of the Wheel of Time.

At this point our journey begins. Moiraine Damodred, scion of a powerful family in Cairhien, finds herself by happenstance two decades into her life’s pursuit: a secret mission to locate the Dragon Reborn after she witnessed a Foretelling that put her in a race with the Black Ajah to find him first. Accompanied by her bonded Warder Lan, they enter the Two Rivers, where the Old Blood still sings. She finds five young people who bend the pattern to their will — and are being pursued relentlessly by the Dark One’s minions.

Much is being made of having Moiraine — portrayed by “Gone Girl” actress Rosamund Pike — be the central character of the series, rather than the Dragon-to-be Rand al’Thor.

I don’t have a problem with it. In fact, Moiraine is a key protagonist of the early books, part of many important moments, including her showdown with the Forsaken Lanfear in front of the red stone archway ter’angreal. 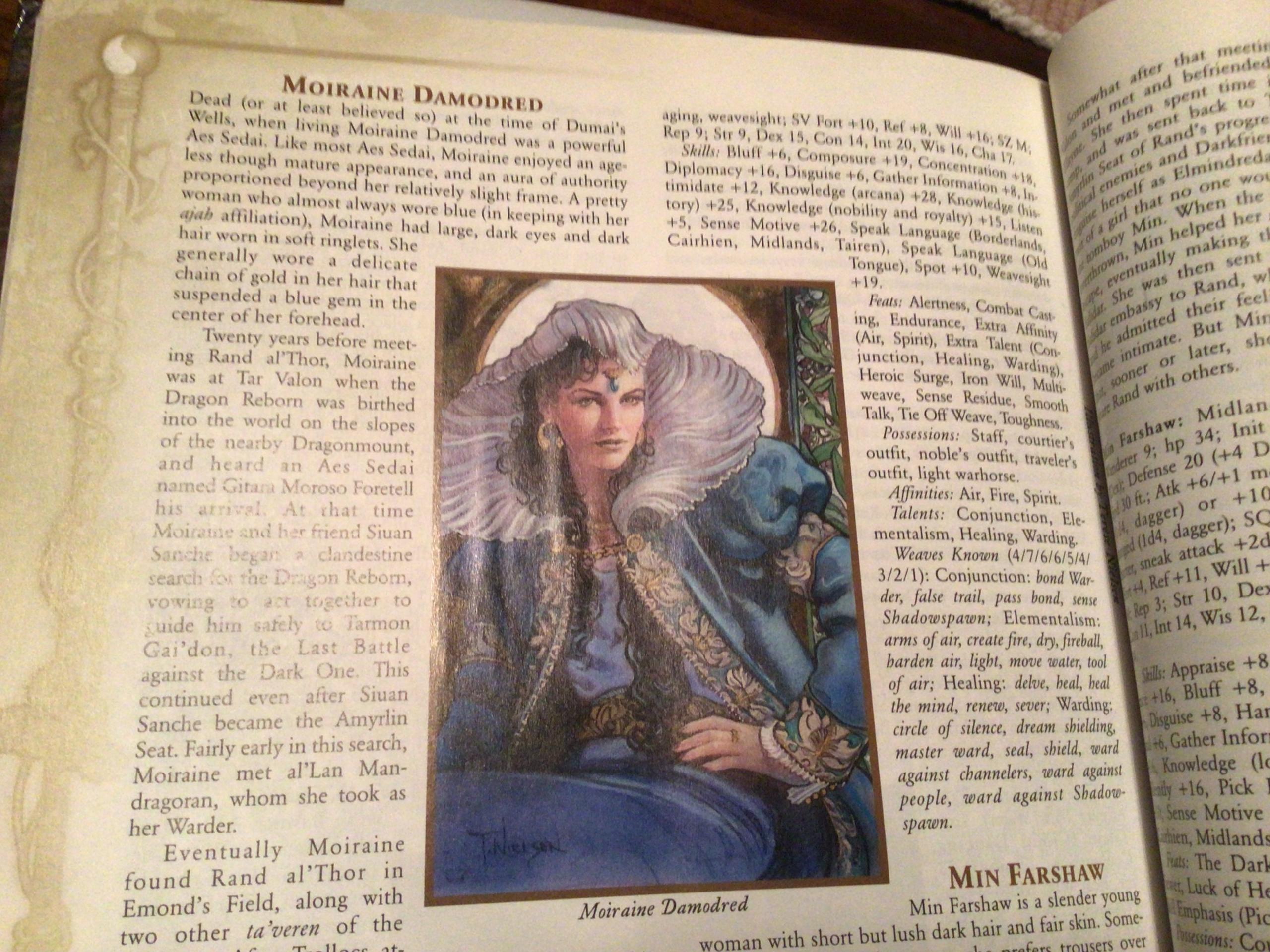 The page from the Wheel of Time Roleplaying Game shows an illustration by Terese Nielsen of Moraine Damodred.

One little thing seems apparent, at least to me, is the costuming and visual “look” of Moiraine. Of course, the depictions of Moiraine by the late cover artist Darrell K. Sweet was an influence.

But if you really want to know what Moiraine Sedai looks like, if you want to know what cues the costume designers on the TV show almost surely took — then I say turn to page 256 of the WOT rpg and look at the illustration by renowned Magic The Gathering artist Terese Nielsen. The diminutive member of the Blue Ajah is shown decked out in cloak and divided riding skirt, in the same shades as her White Tower affiliation. She wears her kesiera, a jeweled pendant on a chain that serves as her focus for eavesdropping — a talent she cultivated to survive in the Great Game.

If the rpg did nothing more that serve as a visual influence on the TV show — then it occupies a significant place in Wheel lore.

But the game really earned its place as a faithful interpretation of the first five novels of the series, translating some of its most fantastic elements into playable elements — letting us interact with the setting in ways that only rpgs can.