When a Campaign Drifts, Return to Dock 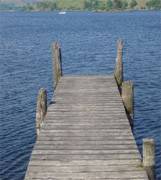 Have you ever started running a campaign and discovered that, for one reason or another, it’s no longer the game you wanted it to be?

I’m not talking about games that your players take in unexpected directions — those rock. I’m thinking of the ones that somehow drift into bad territory, becoming boring, disappointing your players or otherwise not living up to expectations.

I’ve run at least two: one that veered off course after a few sessions, but was still fairly fun (and ended due to out-of-game considerations), and one that died after the first session due to my own mistakes (it was awful).

What they had in common, though, was that both of them could have been salvaged — if I’d only put on my pink shirt, sat down with my players and said, “You know, this isn’t turning out so well — and it’s my fault. I’d like to go back to what I thought would make this an awesome game, and give it another shot. If it’s still no good, we’ll call it — but if you’re up for another session or two, I’d like to see if I can pull it out.”

The boat was adrift, but I’m sure I could have brought it back to the dock — and even if that still didn’t do the trick, at least I would have tried. Based on my experience, the moral of the story is not to give up on games that go astray. See what your players think, listen to suggestions if they provide them, do a little brainstorming about how to start rocking again, and get to it.

And if you need a hand, don’t hesitate to stop by our GMing forums — we’ll be happy to help.

(I got back from GenCon last night — details to follow! I’ve got a lot of catching up to do, so I may not be around much today. TT should be back to normal tomorrow. — Martin

4 Responses to When a Campaign Drifts, Return to Dock