I love gaming goodies, tsotchkes, and widgets in all forms — special dice for each campaign, mascots [1], a wide range of miniatures [2], Tact-Tiles, piles of books…the more the better!

But when I’m GMing, I keep my side of the screen pretty lean. Here are the highlights — tools I consider essential to my GMing arsenal, and which I highly recommend for any GM (brand spanking new or grizzled veteran). 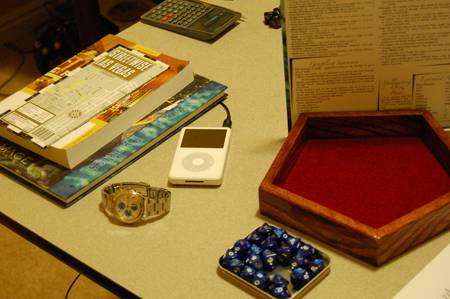 I’m not a big watch-wearer, but I always have one handy when I GM. Rather than wearing it, I set it off to one side behind my screen, where it sits just at the edge of my vision reminding me to keep the pace up, move the game along when I need to, and otherwise take real-world time into account during the game. (A clock works just as well, but for some reason I rarely wind up gaming in rooms with clocks.)

Maybe it’s just me, but I also prefer a watch to my cell phone. Fidgeting with my cell (to un-dim the screen so I can read the time) during a game feels rude, and I like having an always-on timepiece.

Out of the three regular GMs in my group, all of us do the same thing: create a custom playlist or two and plug our iPods into the gaming room’s speakers. It’s simple, but fantastic — and unless I’m playing at a convention, gaming without background music feels really weird to me now.

I wrote a whole article on creating custom gaming playlists [3] that you might find useful. There are also two very nifty resources out there for getting new material: Sonic Legends [4] and World oF Twilights [5].

Whether I’m GMing with adventure notes or without them, I always have a notepad behind the screen. It provides scrap paper, lets me track hit points, and most importantly, lets me take notes about all the fun stuff that happens during the game — things I’m almost certain to forget fairly quickly if I don’t write them down.

After the session, I holepunch my notes and throw them into the binder for that game (assuming I’m using a binder, which I usually do). I don’t worry about having a fancy notebook, since in this case it’s really just glorified scratch paper. (For fancy, I keep a little Moleskine for taking notes as a player [6].)

Dice in a Dice Tray

I know, I know: “Great advice, Ralya — I NEVER remember my dice…” It’s really the tray that’s key for me, but I also set out only the dice I plan to use so I don’t have to hunt among a huge pile in the heat of the moment. Keeping them in the tray helps me stay clutter-free, and rolling them in the tray means I don’t need a huge chunk of the table to myself.

I’ve heard different stories about whether the maker of my favorite dice trays, Dwarven Sweatshoppe, is still in business. Their website is gone, but a reader wrote to me a little while back asking questions about an order he was planning on placing with them, so maybe they’re still around. If you can find them, check out my review [7] before you drop the best ~$30-$40 you’ll ever spend on a gaming tool.

OK, I also have a pen back there with me, and dry-erase markers to use with my Tact-Tiles or our group’s whiteboard, but that’s really all I keep behind my screen when I GM.

I don’t know about you, but I find it’s a lot easier to keep multiple balls in the air when I’m not also fighting with a bunch of clutter, so a lean and tidy play space is a big help for me.

What do you keep behind your GMing screen? Are your favorite tools the simple ones, or do you go more for high-end stuff — like an overhead projector?

PS: If your gaming table is The Sultan [8] (you rotten, rotten bastard), you MUST share a picture!

18 Comments To "What’s Behind My Screen: One GM’s Favorite Tools"

My side of the table is also pretty skimpy. On the floor I have the game books– out of sight lines, but within easy reach. On the table I have dice, my binder containing enemy stats and prep notes, a pool of beads, and a set of tact-tiles.

I’m not using a screen, which is good for looking at the table and keeping an eye on positions. We haven’t had a group split recently, but I agree that a watch as a cue is an excellent idea.

We don’t use music at our table; a couple of players have difficulty filtering out background noise.

I keep a number of items behind the screen with me.

In no particular order:
1. Writing implements

4. Small pad that I scrawl notes on and hand to one of my players as needed — basically anytime the player’s character is off doing something that the rest of the party has no knowledge of (if it’s anything complex I take the player into another room to go over things). I also toss some small pads to the players’ side of the screen so they can take notes and hand me notes if they are off doing something that the he/she doesn’t want the rest of the party to know of — like the thief cutting someone’s purse strings while the party’s paladin is present).

6. Something to drink — when I talk a lot I get parched…

7. My cell phone goes on the table. I have a couple players who get very disruptive with their phones — annoying ring tones and answering phone calls. The two of them also often get video and audio sent to them and they insist upon playing it and then playing it again and again if it is “good” so the rest of the table can get a laugh. It’s very disruptive. When they don’t take the hint to put the phone on vibrate and all I pick my phone up and send them a text asking them to “save vs. magic for xDx damage”. Maybe a bit draconian, but I find the constant fiddling with phones (or laptops with an internet connection) to be disrespectful to the game, me and the other players who are trying to get in the mood of the game.

I also keep a number of things to either side of my chair — a plastic storage case with rarely needed books, older campaign notes, binder of NPCs not currently “in play”, etc; tiles to represent opponents on the battle board (I don’t have many minis);

[9] – Hi, what do you use the beads for? Marking minis as bloodied or other conditions?

Great. Now I’m going to have to take a pic of my gamespace…

It’s more cluttered, but I use a lot of props and such (playing cards, three kinds of poker chips, [10], etc). I don’t use a screen, but I do use a TV tray off to the side for ‘occasional’ items.

But my 20 month old daughter goes to bed mid-game, and music would probably keep her up. 🙁

My area behind the screen is a real mess. I have notes, dice, minis, templates, markers, pens, books, photos, and a beverage. I’ve tried to keep the beverages away from everything else for safety reasons, ever since “the incident.”

Yeah, my GM area is so disorganized that I wonder how I manage to pull of running a game at all. Okay, maybe not that bad, but it sure could be a lot more tidy.

in the distant past, several rulebooks, a spiral notebook and pen, and a metric ton of dice. very traditional.

in the recept past, a laptop and some dice.

What kind of props do you keep on hand usually? What was the strangest one you have ever had.

For me the strangest was a bicycle horn…It was a Shadowrun game and one of the players had a contact who they left to me to create aside from their specifying that the contact would be a media personality…So, I created Binky the Clown who was a performer (and a mage) on his own children’s show (“The Binky the Clown Fun Time Hour”). The horn was part of his stchik. I had a lot of fun playing that NPC and it even helped me a bit with my clown phobia… =)

[15] – After typing six paragraphs, I realized I have another article here, almost certainly with pics… Stay tuned.

I am the single remote player in my group, and also the GM for our Shadowrun game. The GM area is a card table in my basement (less annoying of the wife if I’m out of earshot…).

We use Maptools for the basic map features, and flip between Skype and Teamspeak for voice, depending on which one is giving us the best call quality for a given day.

My GM area consists of my laptop (with Maptools and PDFs of the rulebooks), a physical GM screen behind that for the more quick-reference stuff, my notepad and pen, and the requisite three pounds of six-siders. Add the boom microphone and a beverage, and the picture is complete.

note: We did use Skype’s video feature for a few sessions, but honestly it didn’t provide much for the hassle of setting it up well.

* My current notes for the game, this includes the stat blocks of enemies I am going to use so I can refer to them quickly.
* The “shop list” which is a compendium of all the equipment lists as Wizards is not so kind to have a guide for equipment in one book for Saga.
* My dice bag and my personal dice bag, the personal one has my dice which no one ever touches and the other bag which is bigger has the spare dice for players who forget their own.
* Calculator, very handy for quick addups of bonuses as well as multipliers for weapons
* Pencils, MUCH better than pens, also erasers and pencil sharperners
* Notepads, new players get one when they join my group as I prefer questions about the game in note form to verbal ones
* My mobile phone, which I use the music player for John Williams and the occassional airraid siren.

Oh, and I hate phones at the table unless it’s an important call. One time I had the GM take a call in the MIDDLE of an ENCOUNTER! Thank goodness he has left my group!

Let’s see. I’ve got a DM screen, a laptop, drink, dice, and I need to add a watch (but I usually sit across from a clock on the wall). I’m thinking a timer might be better to add. Oh, and I have a stack of 3×5 cards with all the monster stats on them for the night.

I want to add one key item that is not exactly behind the DM screen. In short, I’ve got one of those 3-punch pencil holders you put in binders. I put my dry erase markers and dice in there. I never forget dice this way.

My three-ring binder of notes — with coffee cup stains, of course 🙂

*Dice- I pull out what ones I will use and may use
*Binder- divided between NPCs, encounters, Maps, and plot stuff, oh notes too
*folder- contains some of the binder stuff in those annoying plastic protectors so that I can use dry erase markers to do stuff and then wipe them off
*pencils

-I am on and off about the screen. We play in my apartment living room on different coffee tables and end tables so it is often in the way.
-cell phones are put away and almost always on silent/vibrate.

On the table is a bag full of pencils and erasers. We have lots of minis and dice in the room, but I keep them off the table until they’re needed.

Picture of my GMing space, with comments [18]. It gets a bit messier as the combat continues…

@Kurt: Awesome setup! Where did you get the SW Blast templates?