What to do When Your Dice Often Misbehave 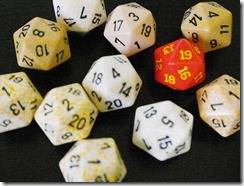 So you’ll often read online or hear during RPG discussions that someone’s dice were “misbehaving”, by which they usually mean they had a long string of low (usually, but sometimes high) numbers. It’s also regularly used as a reason why GMs fudge rolls as in: “I don’t usually fudge rolls, but the dice were misbehaving and we were close to a TPK…”. I personally have a love/hate relationship with dice. I enjoy crunching the math on die systems and figuring out optimal choices based on the probabilities involved, but when it comes time to belly up to the table, my dice very often run cold.

But of course, the dirty secret is that there is no such thing as misbehaving dice. There are only a hand-full of causes for so called “dice misbehavior” and they are all completely in the hands of the gamer. That said, let’s look into the causes and how you can counteract them.

You can see that by adding more dice, the chance of getting the most extreme results is reduced from 5% to ~.1% and the chance of getting the more average results go from 5% to ~15%.
So to fix this type of misbehavior, you could revamp your whole system to use sums or pools over single die rolls, but the impact of that to a system is likely to be fatal. Instead, it’s a better solution to simply switch to a new system that uses a die type that you like better.

So there you are: several common types of “die misbehavior” and how you can fix them. Did I miss any? Have you tried these or similar solutions in the past? How did they work out for you?

** Keep in mind that NO die is perfectly fair, and the more rolls you test with ANY test for fairness, the smaller deviation from the theoretically perfect distribution you’ll be able to catch. Don’t roll every die you own 10,000 times, bury them all in the backyard and be unable to game this weekend.

11 Responses to What to do When Your Dice Often Misbehave