Hello everyone.Â  I think I might be the last of the GenCon Gnomes to chime in. I wanted to give a quick recap my GenCon experience, as well as dispense a few GMing tips along the way. 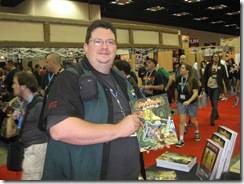 As requested , I made a beeline to the Kenzer & Company booth and picked up my copy of HackMaster Basic. I have started reading the book in earnest, and I am fully enjoying it. I will be doing a full review in the next few weeks, after I have digested the book and given it a proper play test with my group. My initial reactions to the book are very positive.

The book looks and reads very old school, but the mechanics are much more interesting than THAC0, and look to be a lot of fun to use. The humor of the book is not lost, but the slapstick nature of the original HackMaster has been removed. The end result is a book that as I am reading it, I can picture running an old school type of dungeon crawl, punctuated by moments when I laugh out loud at some of the text.

If you want to keep up with my progress on the reading and play testing of the rules, you can follow on Twitter: @DNAphil #hmbreview 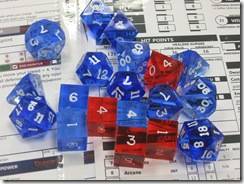 I blame Zach over at RPGBlog II for this one.Â  Before GenCon he ran an article with a link to Col. Zocchi’s speech about dice. After seeing some strange behavior from my own dice over the past few months, and their tendency to keep bouncing around my Dwarven Sweat Shoppe dice tray every time I roll, I decided to grab a cup of kool-aid and join the ranks of the precision dice throwers.

I made my way to to the GameScience booth to get my dice to find out, I was not the only one who saw that YouTube video (in fact it’s been viewed over 65K times).Â  In the past, GameScience’s booth was a modest booth. This year, under new management, and in anticipation of their viral marketing campaign, the booth was 4 times larger, and was very busy.

I bought a few sets of dice, and have had a chance to play with them a few times now, and I am very pleased with them. They are not the prettiest dice I own, but they roll randomly. They also, much like craps dice, come to a quick stop after being rolled in my dice tray. Most of my gaming group followed suit, and our new motto is “Sharp and Random.” 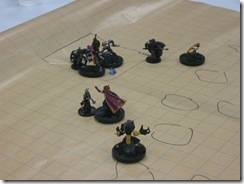 One of the other things I was asked to look at, while in Indy was Gaming Paper. A new product, that as far as I know, made its debut on the Dealer’s Floor. Gaming Paper is a roll of paper (30ft long) that has a 1″ grid printed on it. A roll of battle mat if you will.
I knew that my friends and I would be running a few games while we were in Indy, and none of us wanted to bring battle mats (as cleaning them at the con can be tricky) or our tiles (as transporting them can be a pain). So we decided to get a roll of Gaming Paper.

The paper is thin and has a bit of shine to it. It accepts all writing implements; though we just used a Sharpie marker on it.Â  As advertised, the paper rolls out flat, unlike my battle mat which needs about 10 minutes to flatten out. The only downside that I saw was that it did pick up fingerprints, when you poked at it or if your fingers were oily; so use a napkin after your fist-full of Funions.

In all we found the paper to be very useful, especially in a convention environment where you need a gaming surface, but do not want to haul around your mat, bottle of water, paper towels, dry eraser, etc.

Another advantage to the paper is that the GM can cut off pieces, draw on them and put them aside. Unlike a wet erase that may smear, or a dry erase that will rub off, you can use a permanent marker on gaming paper. When you are done with the current map, no clean up, just toss it in the garbage and pick up the next map.

I like Gaming Paper a lot. I am not sure if at home it can replace my battle mat, but for any games that I play at conventions, local game stores, etc, I will take a roll with me. 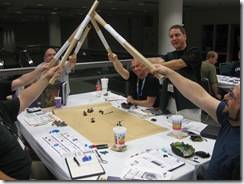 PS– A shout out to the guys at Gaming Paper for passing out some free rolls late on Sunday. We were already playing a game with some, but it was nice to have a few rolls to take home with us. 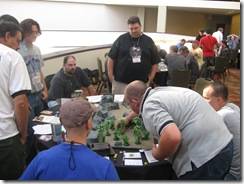 Unlike many of my fellow Gnomes, I had a great experience playing games this year. I should say that I only got to play in one RPG event (my other event was canceled just a few days before we left). Thanks to the very informative article from Telas on Savage Worlds, I decided I should try this game out.

I signed up for an event using Savage Worlds based on the Deathlands novels by James Axler. This was the best session I have ever played at GenCon. The GM for this did everything right. Not to beat a dead horse (see last week’s articles), but I am going to put a of my own tips down here for running a good one-shot or Con game:

All Grown Up and Still Gaming 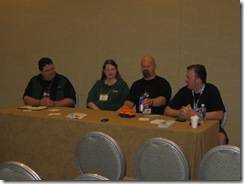 Telas, Patrick, and I, along with long-time friend of the Stew, Vicki Potter, hosted a panel discussion about how to adjust your gaming style as you start a career, get married, and have children. The talk was a lot of fun, and we got a number of good questions. There is a rumor that there may be a viable recording of the talk (Patrick?) and when it becomes available we will post it somewhere for download, so that you can hear gnomish nuggets of wisdom.

In the meantime there were several great points made at the talk, and I wanted to list a few here: 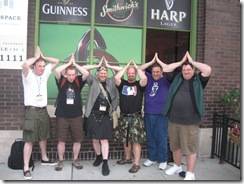 We Gnomes are not just about work, we like to enjoy ourselves. This year we got together at the Claddagh pub for some fine Irish beer and food. I would like to tell you that it was a great meeting of pointy hats, where GM insight flowed forth, but really we talked about a few games, strip clubs, and spent a lot of time making fun of Martin’s typing skill on his iPhone (Chrome Dew! — sorry inside joke).

I am pretty sure I insulted Martin after I related Shadowrun to a bad girlfriend who breaks up with you, burns all your stuff on the front lawn, but you keep going back to her; to which he then produced a shiny, new 4th edition rulebook from his backpack. Good for him, and you can always buy new stuff after she burns it all on the lawn again.

While the restaurant was loud, it was great to sit with my fellow Gnomes (and friends) and share a meal since we only see each other face-to-face once a year.

GenCon 2009 was another great time. It’s something that I look forward to all year. If you have not gone, start making plans (and saving some money) now, and we will see you for The Best Four Days of Gaming.Â  If you want to know anything else about the trip, just ask.

If you want to see more pictures from GenCon, you can check out my Flickr feed and Martin’s.