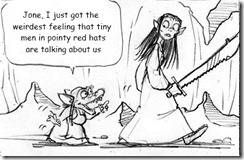 [1]Reading the fantastic web comic Yet Another Fantasy Gamer Comic [1] in which a recent story arc features a god-touched mute half-orc girl named Jone and her mouthy kobold sidekick, a seer from a family where every 5th female generation is gifted with prophecy, I was reminded of the fairy tales of my youth with whole menageries of characters touched by the spark of destiny, with strange magic artifacts, mentors and companions, and other elements that are far too rare in today’s role playing games. After doing exhaustive research (ie: I read a handful of classic fairy tales on SurLaLuneFairtyTales.com [2]) I’ve chosen to highlight a few common elements that can be easily incorporated into your games.

Destiny: The characters in fairy tales often have a great destiny of some sort. They’re the titular seventh son, a princess in exile, are touched by the divine, or are simply wiser or craftier than everyone else. Characters with destiny can create problems if you’re afraid to let them fail, so remember that many fairy tales have the protagonist failing repeatedly before they succeed. Destiny also tends to put the game’s focus on a single character, but other players can take supporting roles that are just as important and powerful as a destined character. Remember that Destiny visits bumbling fools as often as brave soldiers and bewitched princesses.

The Advisor: When a fairy tale character protagonist isn’t the wisest or cleverest person around, it’s fairly common for them to have a companion, or meet a series of characters that advise them on the best course of action. The Advisor can be an NPC, a string of NPCs. an inhuman being, a magic item, or even a PC. They can be cryptic and vague, or bluntly straightforward. The Advisor is the easiest fairy tale element to introduce into a game, and one of the most useful. Not only are they a mouthpiece for the GM, but it’s perfectly thematically appropriate for them to simply lay out exactly what the protagonists need to do.

Magic: Of course magic is a traditional element of fairy tales, but the important thing is that magic is both fairly common, and very unique. Fairy tale characters have magic dolls that do their chores, magic mirrors, cloaks that turn them into animals, and other wondrous charms, but very rarely do they have an enchanted blade or suit of armor. Fairy tale magic is personal, eclectic and unique, and if you want to emulate their feel, the magic in your game must be as well.

Morality: The purpose of many fairy tales was to instruct or reinforce the lessons of morality. Characters who do good and act and speak well are rewarded richly and those who are wicked are punished severely, often with mutilation or death. Morality lessons are present in most RPGs, but not to the same degree they’re seen in fairy tales, so be sure to discuss this potential hot button issue before you start swinging the morality hammer too wildly.

The Stranger: Related to other elements is the Stranger, a person or creature who is more than it appears to be, and who will punish or reward appropriately for how they are treated. The stranger can be used to guide like the advisor, to pass on magic, or to impose the lessons of morality.

The Curse: Also similar to other elements is the curse, a burden on a character that hinders them and must be overcome. The curse is usually dramatic, rendering the beautiful hideous, causing toads to spill from one’s mouth when they speak, or something similar. PCs can help lift the curse from others, or carry a curse of their own. The curse is perhaps the element with the most mechanical impact. Lifting it should usually require some shuffling of stats.

RPGs have arguably strayed far from their ultimate root in fairy tales, but that doesn’t mean that you can’t bring the fairy tale feeling back into your game.

4 Comments To "What ever happened to the seventh son?"

I like the idea, though I’d probably use it for a game that’s explicitly a fairy tale instead of twisting it into a dungeon crawl framework.

I’ve kicked around drawing on Grimm’s Tales and other fairy tales for a game, but never did it. I think this would be great for kids, BTW.

Extra points for using YAFCG as a source.

On the observation that RPGs seem to neglect many of the conventions of fantasy stories, I think it’s a a natural result of RPGs being a group activity. A Sword in the Stone origin is fine when a single character dominates the story, but it’s harder to create a story of a “destined one” when there are four other people at the table who should be getting just as much attention.

There is something fun in such origins and storylines, however. What ideas are there to bring them to the table while keeping everyone in the spotlight?

How to run a campaign with a single focal character and a “supporting cast” is a subject for another entire article, but it’s not unique to fairy tales. For example, the old Doctor Who RPG had one player run the Doctor, and the rest play companions. Players switched between different “timelines” of the doctor and different companions from session to session, allowing each player a chance to play their own version of The Doctor.