Wait… Why Exactly Do We Use Hex Maps?

As usual, rather than actually prep, I find it much more useful and productive to agonize and fret over how exactly I should go about prepping until the desire to prep fades away. But at least this time I think I’ve actually gotten somewhere with it: namely I’ve decided on an alternative to overland mapping with a hex map.

There are three main advantages to overland mapping with a hex map, as I see it:

BUT, in my case I don’t actually want to RUN a game on a hex map from the player’s point of view. I want more of the feel of players navigating by landmark, finding points of interest and traveling from one to another because sight navigation is easier than heading directly to the end destination, similar to Ben Robbins’ West Marches game (see comment #7 here).

No hexes, no squares – just an open terrain map … they would say “march southwest into the woods for three miles, looking for a big tree” and then we’d check Wilderness Lore to see if they went anywhere close to where they intended. If I described a ridge they saw and they would point at their map and say “hey, we must be here” I would shrug and neither confirm nor deny.

Hex maps (from the player’s perspective) badly undermine that dynamic because it’s far easier to just say “I travel a hex east, then a hex northeast, then a hex north” than to pretend you don’t have access to the convenience of hexes on your map. Yes, you can make house navigation rules to shift the effectiveness back towards landmarks (basically add a big penalty to your navigation roll if you’re not using landmarks), but that’s an extra layer of complexity. 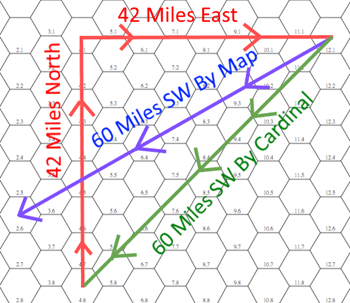 So the next step is obvious: why not just make a hex map and not tell the players that they’re on a hex map? Well, turns out there’s a very good reason: On a hex map, southwest isn’t really southwest, or at least not without a lot of painful jiggering it isn’t. Instead it’s 30 degrees south of west, which is about 15 degrees off (or 60 degrees south, which is off 15 degrees the other way). Who cares, right? Well, your players will care if they travel a week north, a week east, and then travel home southwest because they’re not actually going to get home. You could correct that by actually having them travel southwest when they say they do, the fact that it doesn’t line up with any of the lines on your map be damned, (you can find the distance at 30 degrees south of west and 60 degrees south of west and then draw an arc between them.Â  The center is roughly SW if your arc was close enough to a circle) or by explaining to them that when they say southwest, you’re actually going to be using 30 degrees south of west, and to adjust expectations accordingly, but either way it’s a mess that no one wants to deal with.

OK then, well what about just mapping on white paper, like Robbins’ says he did in the comment thread linked above? This discards those three advantages of hex mapping listed above. It also requires either huge paper or a ton of eyeballing or scanning, resizing etc… on a computer to zoom in or out in scale. Alternately, some mapping software can provide the best of both worlds with the ability to zoom in and out easily with nary a hex anywhere, but both of those solutions require outlaying some cash (and while I technically have a copy of CC2 laying around here somewhere, I’ll be damned if I want to try to get it running on Windows 10).

But, it turns out there’s a simple solution that retains all the advantages of a hex map, with additional advantages that hex maps don’t have. It’s so simple that it makes me wonder why our hobby ever started using hex maps in the first place. I suspect it’s a legacy from RPGs’ wargaming roots, where the hex offers additional facing options that are completely useless to overland mapping but I‘d be happy to be educated on the finer points of it by anyone grognardier than I.

That solution is the standard graph paper grid. Using it for overland maps has the same advantages of the hex map, but also has the following advantages: 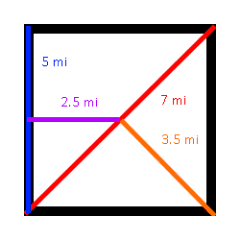 One of may favorite articles about the scale of hex maps is In Praise of the 6 Mile Hex over at The Hydra’s Grotto. If you’re going to use a hex map, that’s a good place to start. There they discuss the measurements of a 6 mile hex, that a 6 mile hex is about the limit of visual range, so you can see out of it only if you find a high vantage point, and discuss breaking it down into sub-hexes. I wanted to find a similar “perfect size” for a grid map, and It turns out that it’s the 5 mile square. A 5 mile square is 25 sq miles (as opposed to 31 for the 6 mile hex), is 2.5 miles from the center to a side, 7 miles diagonally from corner to corner, and 3.5 miles from center to corner. Since it’s nearly the same size as the 6 mile hex, a 5 mile square is also about the limit of vision without finding a vantage point. I had some trouble with scaling the 5 mile grid up and down at first. I had assumed since the Grotto’s article mentioned scaling the 6 mile hex up to a 72 mile hex and down to a half mile hex that those were also nicely proportioned hexes, so I was trying to find some magic ratio of grid sizes that had a common factor, were 3 useful scales, and all worked out well as far as “round” distances were concerned. Turns out the best set are 3, 12, and 48, though the numbers on 48 are fudged a bit and the difference in scale between 3 and 12 could be larger.

But it turns out, as I was fiddling with the measurements of varying hexes, trying to discover why they worked so well scaled up and down while grids didn’t, I discovered that my assumption that hexes scale well isn’t all that true, so as long as the level at which the majority of your navigation will be done has convenient measurements, that should be sufficient and other scales don’t need to be as clean. For ease, here are a handful of clean square grid sizes with useful dimensions:

Because it’s really easy to make custom “scale maps” with grids, it’s not essential to keep your jumps in scale to a consistent factor, like is suggested for hex maps. Instead, choose a scale you like for travel and scale up and down by whatever factor works best for you. If you want to go 1/2 mile, 5 mile, 25 mile, go right ahead.

Here’s a sample map that I had lying about on which I overlaid a grid map. Estimations of distance is quick and easy without any weirdness in the angles, so it can be used either as is or using the grid for your own reference only. 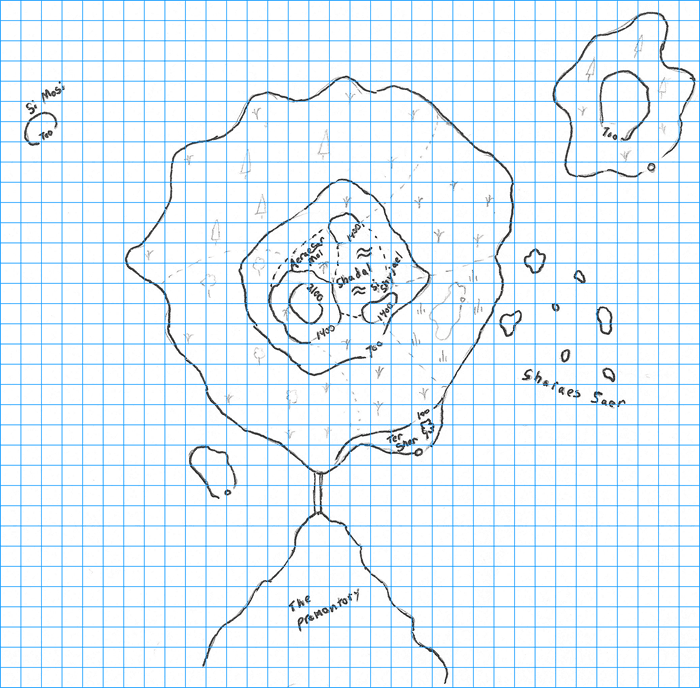 17 Responses to Wait… Why Exactly Do We Use Hex Maps?