Today’s guest post is by Kira Magrann, who talks about obsessions and how to use them to fuel your creative desires. – John “Bookhouse Boy” Arcadian

I get obsessed with things pretty easily. It’s part of being an artist, or at least so I hear from other creative types and all those silly huffpost articles about how creative brains work. I guess its also part of being a dreamer and imaginer: my brain doesn’t stay on one thing for very long, it likes to be stimulated and imagine new things. It’s good to have healthy obsessions, as an artist, and a game designer. They help me channel my feelings in directions that are useful.

I’m working on like, a bazillion Tabletop RPG and LARP projects right now, and that’s my preferred method of creation. Working on multiple things means when I hit a wall with one, I can bounce to another. Having a healthy amount of healthy obsessions means that I’ve always got inspiration for games I can prune from my current list of OMG HAVE YOU SEEN TWIN PEAKS YET or HEY DID YOU KNOW I’M IN 15 DIFFERENT SNAKE FB GROUPS. It also means the stuff I’m writing is stuff I’m super excited about . . . right now! Not something I have to get pumped up for to write. Like Blade says, take that inspiration and uuuuuuuuuse it.

One thing I’ve learned is, if I’m obsessed with something, I have to jump on it and use it right away. Like, three months from now, I will no longer be obsessed with Twin Peaks and the creative energy I have to work on projects around those ideas will disappear like fog in pine covered mountains. So when I realize the obsession is at its, ahem, peak, I’ll usually take a deeper dive into that thing and figure out why I like it. Usually, I’ll make lists. I’ll think about the themes, setting, genre, gender dynamics, identity politics, feelings, characters, and story that are involved. Then, I’ll usually end up with something like this: 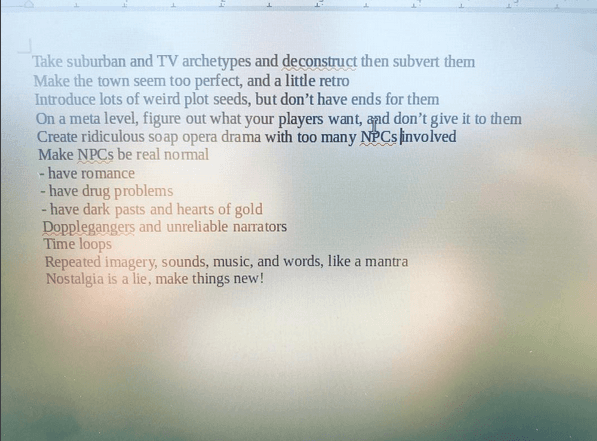 I’m often working on many freelance projects at once, and usually, these are small projects for bigger games. So like, a setting, scenario, or small game for an anthology. So its most useful for me to have a list of inspirations always in my back pocket. Now that I’ve worked out what it is about Twin Peaks I love so much, when someone needs a setting I can easily identify “oh, right, its that retro American aesthetic I’m into, with a bit of the supernatural, and also a self referential awareness of itself.” This is a lovely thing to have rattling around my brain, because I can then apply it to a setting for a project when it comes along.

Specifically, a Twin Peaks type setting would do great in a supernatural game, right, BUT I can also use this inspiration to create a dozen related things. I’ve applied it to a Cortex Plus supplement that will help players build scenarios and drama in a small creepy town, for example, and I’m also going to write a more horror based scenario for Fear Itself for Pelgrane Press. Deconstructing my obsessions in this way has been incredibly helpful!

If you want to do this for your own game design, or even a session of a game you’re running, make a list of all your current obsessions. Try to think of at least ten, even if they don’t seem to match up with what the main themes of your game are. Then, go through that list and find three that might be combined well together, and compare to your game or game session. Once you have the big three, write them down. Then, make a new list of all the ways this could apply to your project. Voila, now you’ve got your new obsession based idea!

Write your heart, but know your heart first, lads. Follow obsessions to find what really drives those excited feels, and then recombine til you find that magic something that inspires all your weirdest ideas.