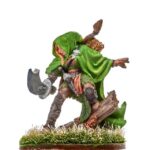 Back in February, today’s guest author, Aaron Ryyle, shared Eight Tips for Using Travel as a Plot Device in Fantasy Games here on the Stew, and now Aaron’s back. This time he’s written an in-depth look at how to work backwards when doing game prep. Thanks, Aaron! –Martin

In my other life I am a college professor. In education we spend a lot of time planning: planning courses, planning lectures, planning activities . . . The same is true of game mastering. Even if we take a prep-lite approach (which I confess I do not) we all need to do some prep for our sessions and our campaigns. Effective use of prep-time is crucial to a smoothly-run game. In my teaching I use a very effective preparation and design technique known as “backward design.” (This technique was popularized by Jay McTighe and Grant Wiggins in their 1998 book, Understanding by Design.) In backward design one begins with two or three big ideas and works backward from there.

While I was working on this semester’s courses I began to think about how backward design could be used in game prep. This article will introduce backward design in a gaming context and give concrete examples and advice for using the backward design approach in both campaign prep and session prep.

What is Backward Design?

Often in preparing for a semester, instructors fall into the trap of thinking forward–we think about all of the content we feel we need to present in the course, and then try to fit as much of that content as we can into our class schedule. This approach is top-down and content-driven, and it completely ignores a crucial fact: five years from now, our students will have forgotten almost every piece of information we tried to cram into our course. Instead, in an effectively designed course students will come away with two or three big ideas, and the content of the course is designed to support and illustrate these big ideas. In backward design, we call these big ideas “enduring understandings.”

In other words, I do not try to force students to memorize facts; I use facts to support and illustrate two or three overarching themes.

What does any of this have to do with game prep? Just this: if we begin our preparations with a list of locations and monsters we want to use in our game, we are taking a top-down, content-driven approach. In five years our players will not remember whether they fought orcs or goblins or a minotaur in a particular session . . . unless those monsters are tied to the big events, the big battles, and the big themes. Waves of drow over the course of a journey to the drow city–that they will remember. In game prep, we want to begin with those big ideas and work backward.

In campaign design our “enduring understandings” are the major themes, conflicts, and events that drive our story. For example, say I know that the driving force of my story revolves around a shaky alliance between duergar and drow deep in my mega-dungeon . . . an alliance that threatens the surface territory in which the player characters live. This is the big idea, the central conflict into which I will draw the players.

With that in mind, I can begin to think thematically. I like the theme of the original DragonLance games and novels: the idea that evil will turn on itself. So now I have a conflict–the PCs have to deal with an alliance of duergar and drow–and I have some idea of a major event toward which the campaign is leading: at some point, the alliance will crumble and the duergar and drow will begin to fight each other. (And of course the PCs will be caught in the crossfire.) I can also begin to develop my big, bad villains, including the duergar king and his general. And, finally, I obviously know what monsters I will use most often.

Now I can think about how I will use my content–locations, monsters, and events–to communicate and illustrate my theme and conflict. I know where I want to get; now I can begin to design sessions that lead toward these major events without (too much) railroading.

We want each session to push toward our big themes and events, and we want to use our encounters to further that push. We know the big ideas we want to introduce–from there we work backward to scatter encounters throughout the territory, allowing us to push toward our big idea for the session without excessive railroading. There is no reason to make the PCs fight hobgoblins when what we really want to do is introduce drow raiding parties. Instead, wherever the PCs go, they will find evidence of drow raids: a burned village scattered with dark elf corpses, a drow camp in Mordenwood, refugees on the roads telling stories of dark elf raids . . . whatever. Finally, the PCs will track the drow to the dungeon, but they can take their own path to get there.

Backward design can also help us in improvising. Say the PCs refuse to follow up on all the hints and hooks we offer. (Unlikely, I know.) They refuse to go north-east toward the dungeon and insist on going south. What do we do? Give them some random encounters, but make each one somehow point north-east. If we know where we want to go, we can offer gentle (and not-so-gentle) nudges in that direction. Most players will buy in easily, once verisimilitude has been nodded to; they are there to play the game, after all.

In the end, many of us do this sort of thing instinctively. We know we want to present our super-cool villain and have the PCs explore our awesome mega-dungeon, but getting there can be haphazard. A good plot is not haphazard, though: it moves from one event to another toward a climax in a logical progression. It can be difficult to get to that climax without railroading, however, especially when we design with a top-down, content driven approach. So don’t do that. Instead, think backward: what do I want to say thematically? How can I use my big, bad villains to illustrate my theme? How can I plan this next session to move the plot toward that theme?

In short, try to avoid the temptation to let the content dictate the planning. Instead, let the content be guided by your “enduring understandings.” Ask yourself, “What do I want my players to remember about this campaign–and this session–in five years?” Then work backward from there.

A student of philosophy, religion, and rock-n-roll, Aaron Ryyle has been game-mastering since he opened his first Dungeon Master's Guide in 1987. In his spare time he writes metaphysical fantasy and continues to tinker with his home-brew fantasy RPG setting.