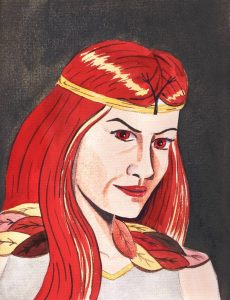 You know the old saying: “Villains, we love to hate them.” I don’t buy it, not for a minute. We love our villains. When Darth Vader, Loki, or even Plankton are on the screen, we can’t take our eyes off them. It’s not that we admire their evil deeds, but there’s something magnetic about their confidence and scheming. So how do we bring those kinds of central villains into a roleplaying game.

In this article we’ll look at the advantages of having one main villain in your campaign, and also some of the concerns if you go that route. Campaigns aren’t exactly analogous to books, movies or television series. They have some special considerations to note.

ADVANTAGES
A central villain, introduced early in the campaign, can give a unifying feel to the game world. Players get to put a face to evil almost right away, and have a reason to come back session after session. They want to defeat someone specific, not just vanquish nebulous evil forces. (Or nebulous good forces, depending on your focus). For example, in the original Star Trek, leaders like Kor, Koloth, and Kang stick with us longer than your average Klingon soldier. In one of my campaigns, they hated our villain, the Autumn Queen, so much so that one character was willing to sacrifice himself during the final confrontation.

Central villains can also help provide a theme to your campaign. Perhaps in your fantasy world the central villain uses their minions to create slave villages. Fighting to restore freedom can be the theme for your players’ characters (PC’s). Maybe your villain is searching for ancient powerful artifacts. The PC’s can make procuring, securing, or destroying such artifacts their mission in life. Indiana Jones got four movies out of this exact theme, and Lara Croft got two so far.

Central villains also make things a little easier for you as the GM. You don’t have to keep creating new threats session after session. Think about the central villain’s main goal (enslave all the elves, collect all the pieces of the Sword of Kadula, capture all the scientists needed to create the superweapon, etc…). Then consider the possible steps needed to meet those goals. Plan your sessions around those steps, always making sure that the PC’s have the chance to disrupt those plans. There’s a reasonable length campaign right there, and the central villain can help it remain in your players’ minds for years to come.

CONCERNS
As stated before, games aren’t like other fiction. There are some special factors you’ll need to think about before implementing a central villain. First, the focus of a game session needs to be on the PC’s almost all of the time. In fiction, you can cut to the villain plotting, scheming, and torturing in their lair or starship. That’s usually not practical in a game: PC’s would then by privvy to information they would otherwise not know. Unfortunately, your central villain’s best scene-chewing monologues may have to take place off-stage.

You may need to keep your central villain offstage for another, very practical reason. You don’t want the players to kill or capture them too soon. If you’ve done your job, your players will hate your central villain. Every time you bring them onstage, the PC’s will be looking for the quickest way to neutralize them. If you’d like your central villain to stick around a bit, they will have to work through minions much of the time. Now, one option is to have them teleport to safety at the end of every session, but that can be frustrating for players. Skeletor could get away with it, but you probably can’t. (Unless you are running a He-Man game. Which you totally should. Please invite me, too.)

Another question to be asked is how does the central villain get ahead? Unless you want your players to lose frequently, they will be disrupting the villain’s plans on a regular basis. Imagine if Darth Vader and the Empire were constantly prevented from acquiring the technology they needed to build the Death Star. If you want the finale of your game to involve a Death Star, they’ll have to build it away from the party.

A final concern involves your villain’s popularity. A good central villain can be a tough act to follow. When the villain is finally defeated for good at the end of a campaign arc, what do you do next? You may not want to just rush in and create a new central villain. Create some small-time opponents and see if any of them stick. Try some smaller scale adventures for a while. Don’t rush the players into a new adversarial long-term relationship on the rebound. Let them have coffee with a few different ne’er do-wells first.

CONCLUSION
A strong central villain can add a lot to a campaign, but it shouldn’t shackle you as a GM. There’s nothing wrong with having opponents not connected to the central villain, or running side treks that have nothing to do with the Big Bad. If you listen to your players, they’ll tell you how badly they want to take the fight to them, or whether you need to switch gears and take your campaign in a different direction.

Have you used a central villain for any of your campaigns? Do you avoid them for the reasons listed here, or other reasons of your own? Let us know below. (And watch your back, can’t trust that Skeletor for a minute).

5 Responses to USING A CENTRAL VILLAIN: ADVANTAGES AND CONCERNS