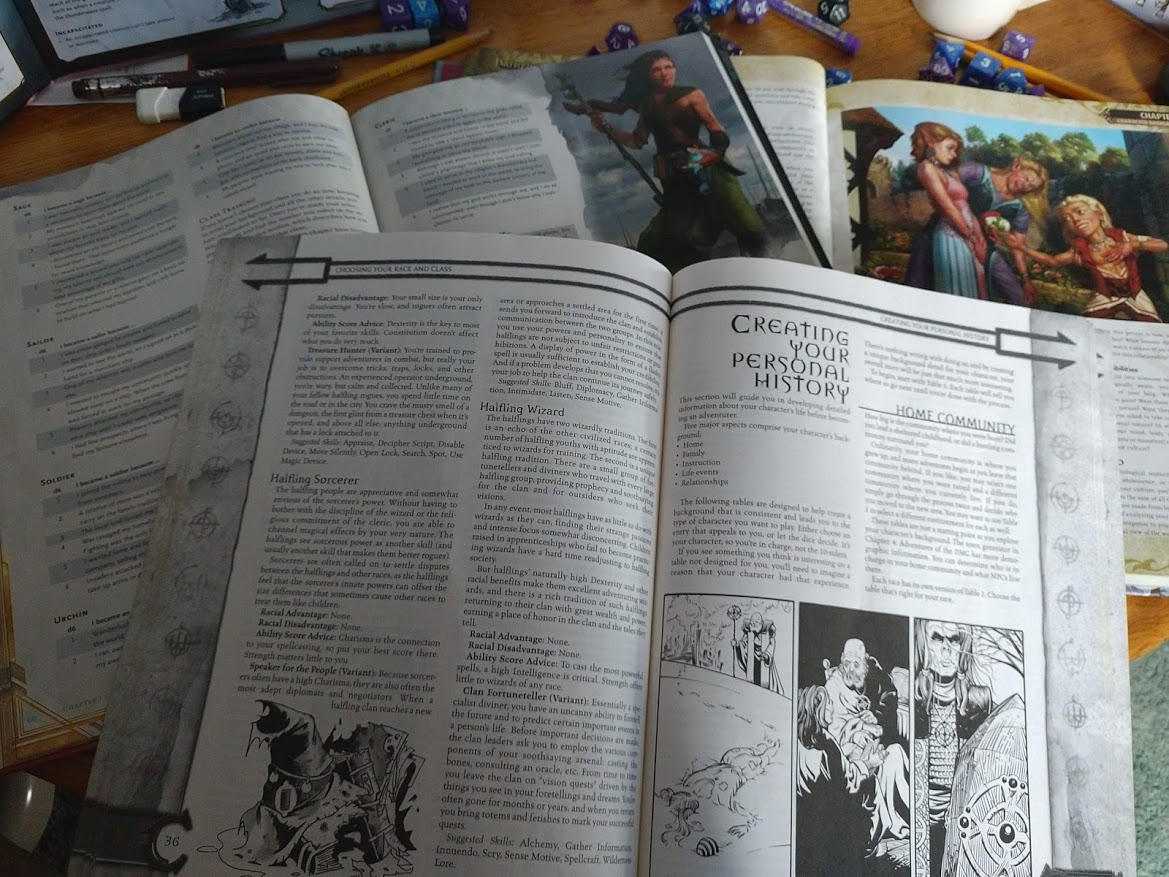 When a GM is plotting a campaign, one of the things she or he wants to do is identify points of conflict that will directly affect the player characters.

Published adventures will have all sorts of thrilling moments and engaging encounters. But making the story personal can often be what makes it memorable – what brings it home.

You want to hit them where it hurts.

When the authors of Gnome Stew created Eureka: 501 Adventure Plots To Inspire Game Masters in 2010, we used Georges Polti’s list of 36 dramatic situations as a guide. Thirteen of the dramatic situations involve family or loved ones. Who the character loves and is loved by is essential to establishing those dramatic beats.

Over the holiday I caught up with some game-related reading, including digging into D&D’s Xanathar’s Guide to Everything (so I’m a year behind, shoot me).

Included in the book is a list of tables designed to generate a background for PCs. Tables such as this can be helpful because they provide additional material that a player might not have considered when coming up with a backstory. (Or, if the player isn’t inclined to do a backstory, at least it can provide the GM with an item or two that can be used as a personal hook).

Tables such as this should never be used slavishly. I think they work best when they serve as a menu that a player can select from.

As an exercise, I rolled up two character backgrounds using the Xanathar tables, then for comparison’s sake, did the same with two other tables I have found usefulÂ – one from the Hero Builder’s Guidebook (Wizards of the Coast, c. 2000) and the other from Pathfinder’s Ultimate Campaign (Paizo, c. 2013).

The dice produced a couple of interesting points: 1) The dragonborn came from a wealthy family that resided in a palace or castle, but whose mother is missing because she was imprisoned, enslaved or for some other reason was taken away. 2) The character is a gifted performer whose love of knowledge and stories was awakened by spending time in an old library, and who learned his craft from a master bard who was a human aristocrat, someone alive and famous.

Both of those things work well, and could even be combined together. The missing mom could be a victim of palace or imperial conflicts. She could be like Eleanor of Aquitaine, who spent close to 16 years in prison for siding with one of her sons over their claim to the crown. And perhaps this aristocrat is her keeper, by some arrangement with the father, but the PC can still visit and learn from them.

My favorite part of this random generation was the 11 siblings the chart produced. Big families produce lots of conflict, reasons to do things, reasons to NOT do things, and frankly, every time a character needs a brother or sister to this that or the other, you’ve got one. (“How many brothers and sisters do you have?”)

The other part of the conflict is built into the origin; the family lived on the frontier, on the edges of civilization, and that pop died and got eaten by monsters. Whatever that monster is – picking one is always fun – gives the gnome a built-in enmity for the rest of its career.

A life event that provides fertile ground for a revenge storyline is that the gnome was knocked out and left for dead in a feud with a rival adventurer over shares of a treasure. This adventurer is now an enemy.

This generator provided me with a human from a family of refugees who established a homestead along the mountainous frontier. This character was raised in adventure territory, combat was a part of their lives. Â Of her or his immediate family, only an older sister survives. However, there is a large extended family of uncles and cousins.

Why was the family on the run? Well, the generator said the family held dissident political views; they supported a rebellion. In fact, an ancestor achieved folk hero status as a failed rebel. That’s a legacy the character might wish to embrace or discard. Either approach can be interesting.

This generator produced a half-elf cleric who was raised among forest-dwelling elves as an only child.

Two events are pivotal for the character: 1) The PC was a convert to the faith, a decision that was heavily influenced by a current love interest. 2) The PC twice has had run-ins with the law, once imprisoned for smuggling and later for assaulting a close friend for religious reasons. Does this make the PC a zealot? Are they someone under the sway of another (the lover)? Does the newfound religion jive with the folks back in the forest home?

This character has the makings of a pariah, which is interesting. Maybe the only way they’ll find themselves is within a party of adventurers.

Obviously, different background generators do different things, emphasizing different aspects of lives. What I like about each:

Xanathar: It creates a conflict that is fresh and immediate, often familial, often involving a patron or teacher. The PC has to fill in the blanks a little bit more than in the others. Â On its own, there are gaps. But if a PC pairs it up with the Backgrounds, Boons and Traits section of the character development, a more cohesive picture of their past takes shape.

Hero Builder: Family legacy is very important. Where you are from and who your parents were are key to your development. The apple does not fall far from the tree. Â The ethics charts can be useful. I also found that religion and political beliefs factor in more strongly here than in the others.

Ultimate Campaign: Everything is driven by the PC’s character class, and secondarily, by their race. There is a darker tone to the background material; in all likelihood, something traumatic happened that spurred an adventuring career.