Our summer world-building exercise keeps zeroing in. We started with a broad overview, grabbing a continent and carving up land areas into nations. Now we’re ready to sketch out the PCs’ homeland.

I’m selecting the territory in the center map, the one at the heart of the peninsula with a river running through it. I like it as a homeland because it has access to the northern and southern seas, meaning that if a player wants their character to come from elsewhere in the setting, there is a plausible explanation for their emigration.

The Nentir Vale is the setting presented in the fourth edition Dungeons and Dragons Dungeon Master’s Guide. As an example of what a homeland filled with adventure potential looks like, it is very good. It is only two and a half pages long, proving that a useful gazetteer can still be concise.

Broken down, the Nentir Vale has five towns or safe places, “points of light” in the vernacular of the setting. It describes five major wilderness encounter areas. (Though to be fair, the setting has more. But these are simply names of geographic features on the map without description — locations to be fleshed out by the DM later). Lastly, and more importantly, the setting describes six adventure sites, all ruins and dungeons. A handful of places giving the PCs some choice of where they want to explore next, but not too many as to overwhelm them. Â

Let’s give it a name: Mendathis. It’s people are the Mendati. 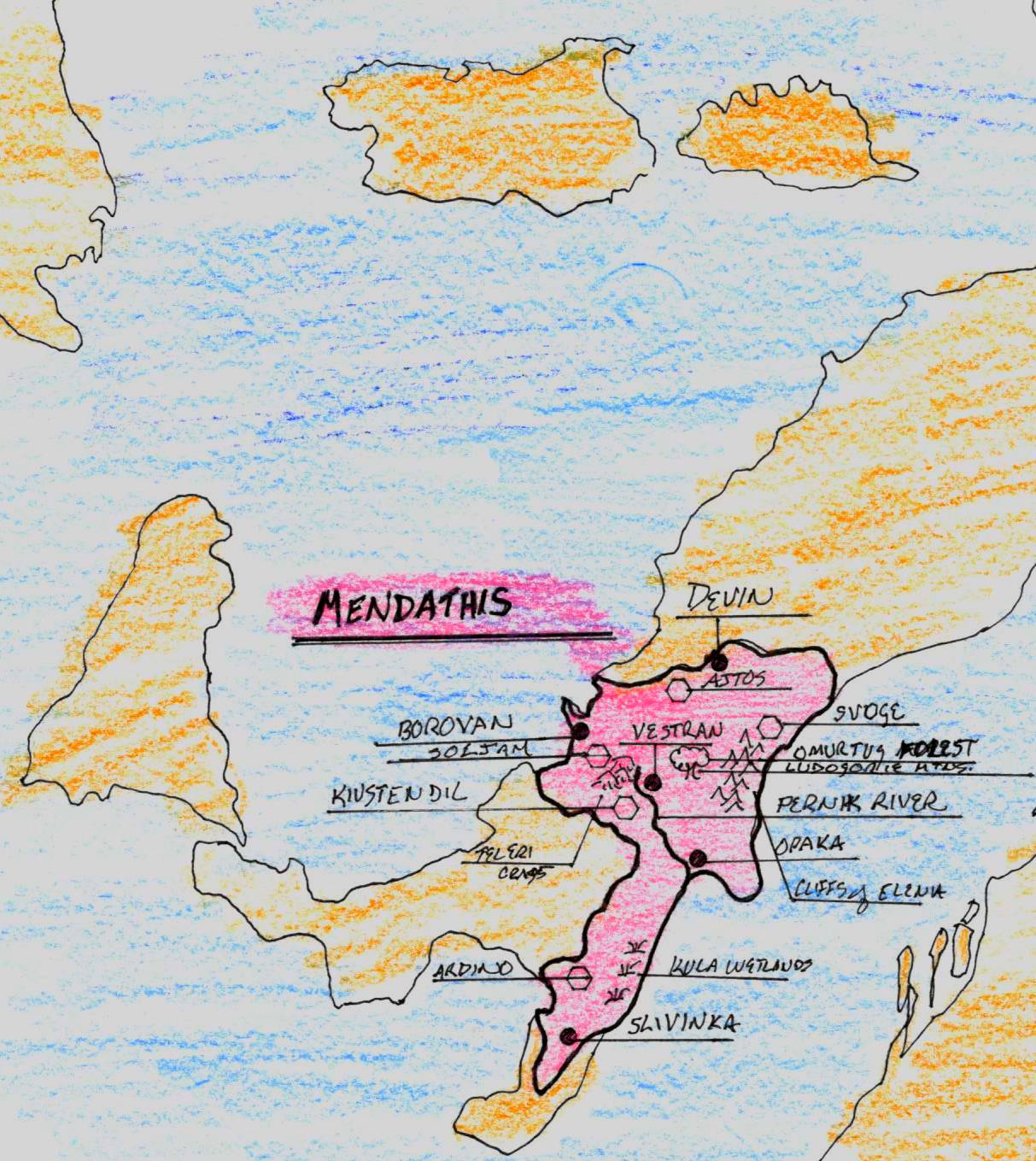 Points of light. (For simplicity’s sake, all the place names will be real, in this case, Bulgarian. I can change them later if I wish). Â The old provisional capital on the north coast is Borovan. It’s rival city is Opaka and is on the southern coast at the mouth of the Pernik River. Â Upriver is the centrally located frontier trading hub of Vestran, a walled town amid rugged wilderness. The eastern border town is Devin, which has an active garrison. Slivinika is the regional capital from land annexed from a neighbor along the southwestern coast, and thus, has a different character and culture from the rest of Mendathis.

Dungeons and ruins: An ancient and abandoned fortress lies at Kiustendil, abandoned when the Pernik River changed course. A highland stronghold overrun with monsters is Soljam near the source of the Pernik. An abandoned temple to the old gods lies at Ajtos on the trade road between Borovan and Devin. Svoge is a lawless area with many dungeon complexes in the eastern mountains. Â Ardino was a wizards’ tower and enclave in the annexed territory.

Wilderness locations: The dark and forbidding Omurtag Forest fills the central frontier. The Lodogorie mountains occupy the southeast. The Cliffs of Elenia are where the mountains meet the sea. The fens and wetlands in the vicinity of Slivinka are known as the Kula. Â The highlands that serve as the source of the Pernik are called the Telerig Crags.

Next time, we’ll be adding detail to the PCs’ home base, the frontier town of Vestran.