World building for your campaign – whether it is for an ongoing series of adventures or just a few ideas percolating in your noggin – is always a fun exercise. Imagine a world different than ours and consider all the roleplaying possibilities.

Is this going to be a game set in a fanciful, magic-filled ancient world? Is this going to be the far-flung future where tech, blasters and intrigue rule? Is it going to be earth, but viewed with a squinty eye, with a series of alternate events that have shifted history somewhat?

Or maybe it is something else – a new game you’ve purchased that you want to apply to a landscape filled with mystery and unknown lands ripe for exploration?

For many of us, the stumbling block is “the map.” Every fantasy world needs a map, right? Drawing one to your satisfaction, however, might be an iffy proposition.

If you are looking for some options, consider these:

So the current – that is June 2018 issue – of National Geographic has this double-page spread of “Future Earth.” Basically, a map of what the continents will look like once they’ve drifted back together again sometime 200 million years from now. 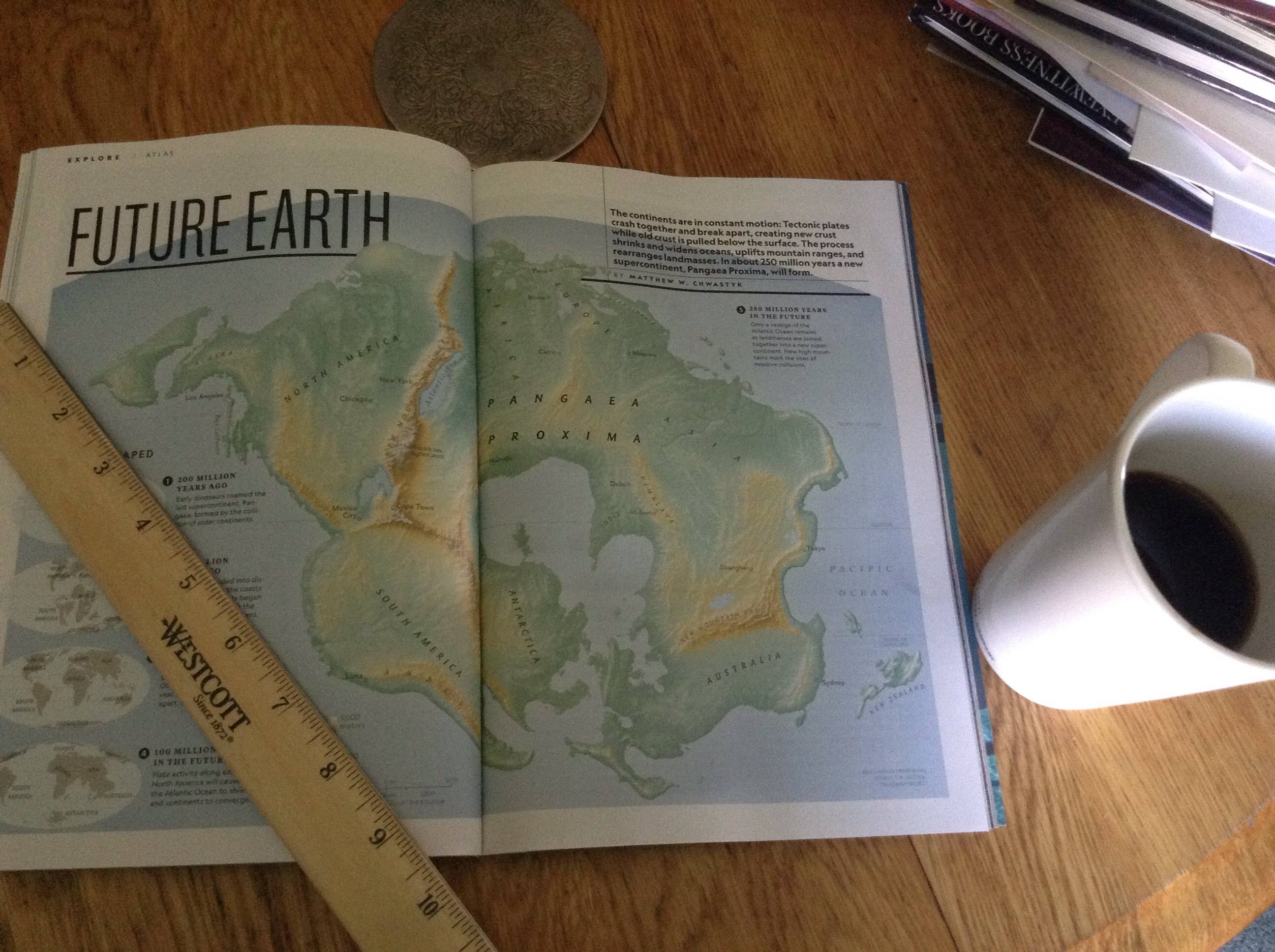 The map shows the next supercontinent, Pangaea Proxima. Looks like a great place to set adventures. (New Zealand appears relatively unchanged, however, which is good news for hobbits, I suppose.)

Some of it is pretty cool. I’m particularly taken with the projection that my former home in the Pee Dee region of South Carolina – swampy lowlands of note – will boast the highest point on earth once the North American and African plates collide creating the newest mountain range. And the Atlantic Ocean will become a big lake.

If you are into real estate speculation with a particularly long view, I’d start buying up parts of Antarctica.

Now, keep in mind, it might not be the most pleasant landscape. Earth’s climate gets wonky whenever the continents drift together, essentially creating a single world-ocean. In fact, looking at this map, almost the entire world will be in the equatorial zone. Hot, sticky jungles and fierce deserts. Find some fresh water and settle in as best you can.

Setting all that aside, though, this map is ready to be carved up into feudal kingdoms, or if you are of a sci-fi bent, one-world government districts. And if your players are truly adventurous, you might consider exploring the area that isn’t on this map – that big blue ocean. I wonder what big fishes are out there?

Give ’em the boot

This trick is an oldy, but a goody. Turn that atlas page on it is side. Abracadabra, alakazam, it’s a continent-sized “world” map worthy of setting your fantasy world. 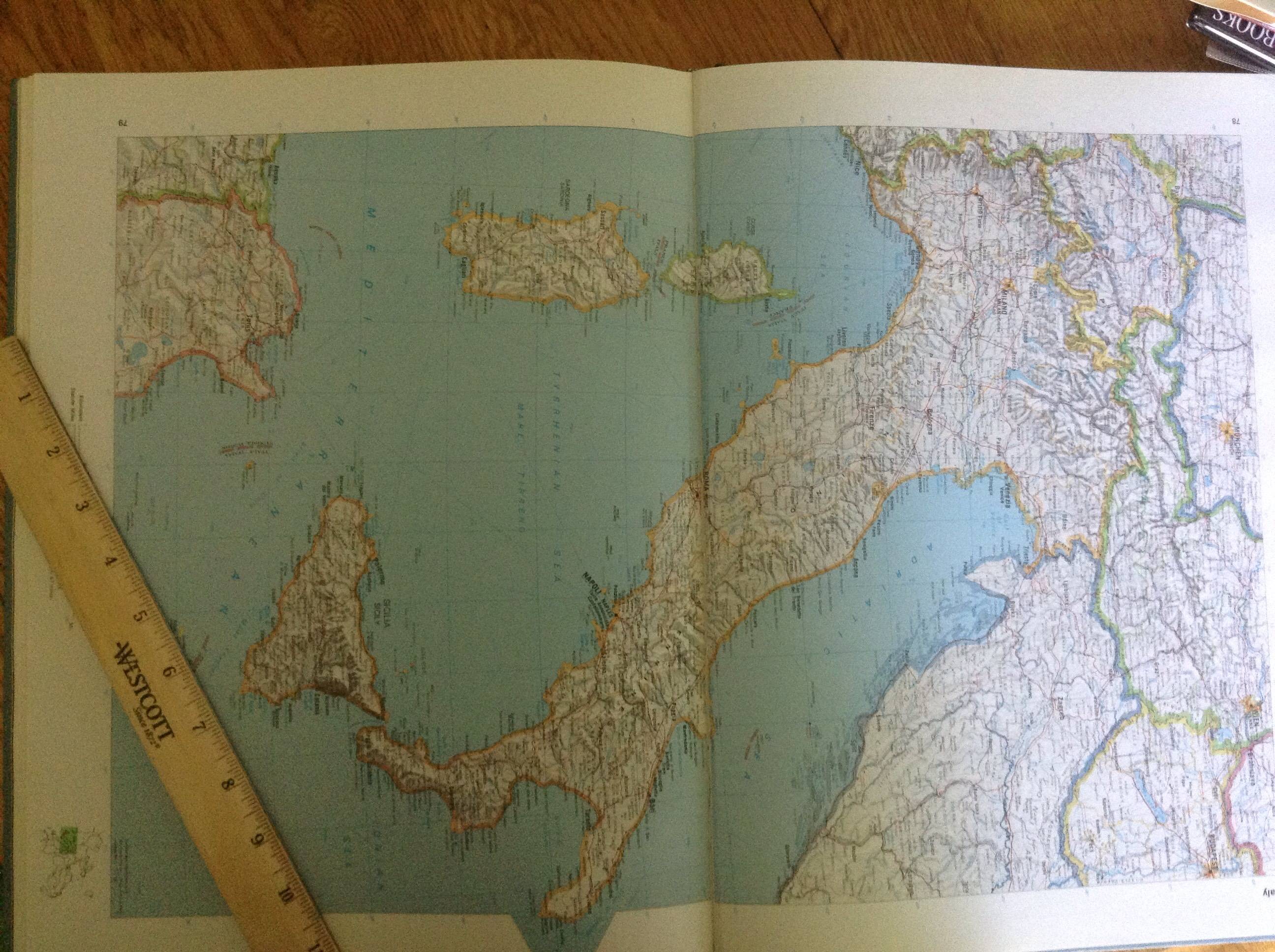 I’m particularly fond of the boot of Italy and Sicily as a playground for world building. The north coast of Africa can serve as the exploration touchstone of your “new world” across that narrow sea while the length of Italy can be your “old world.” Just change the scale and set the equator somewhere and you are good to go. Just remember, that’s a continent-sized landmass you’re staring at, not one of the great nations of Europe.

The beauty of this is you’ve got mountains, rivers and coastlines perfectly and sensibly arranged, leaving you with the fun part of making up nations, histories and adventuring locales. And because there is an ocean, you’ve got pirates. Every setting needs pirates. (Well, maybe not every setting, but most of them …)

Beware the barbarian invaders of the north islands (Corsica and Sardinia), I’m sure they are a proud, fierce people with swift boats who love to raid the mainland. Or maybe the twin islands are a land of dwarves and elves being exploited by the mainland? Or maybe giants and dragons live there and they generally eat any visitors? It’s up to you.

The other bonus of using a map like this? Place names. Maybe not all of them, and not in the exact location as their real world counterpart. But if you’re at a loss for finding a suitable name for a point on your map, well, you can do worse than the range of names on this map. In the four corners you’ve got Hammamet, Epipal, Levice and Copyright Rand McNally and Co., Surely, at least one of those is serviceable. And, there’s a ton more in between.

I would be remiss if I didn’t suggest a map by Martin Vargic (JaySimons on DeviantArt.com), a Slovak artist who does jaw-dropping cartography.

My recommendation?Â The World – Ice Age, a global map showing expanded coastlines from about 14,000 BCE. For my money, it’s worth it to see northern Europe, the British Isles connected by Doggerland to the mainland, and the hop-skip-and-jump from Iceland, Greenland and North America.

Run this without mile-high glaciers (or do, if adventures beyond “The Wall” are your thing) and this has all sorts of amazing potential. New kingdoms, new ambitions, new religions. Maybe the Nordic sagas are the predominant faith? Or the beliefs of the North American eastern tribes? So many possibilities, so many adventures.

Another great locale on this map? The Sahara dotted by fertile lands and fresh-water lakes. Imagine the possibilities of such a landscape as the hub of African peoples, cultures from so many rich traditions and ages mingling and co-existing.

Other “new lands” your players will be eager to explore? How about the land bridges? There are lands connecting Australia to southeast Asia, Russia to Alaska and Japan to the Korean peninsula. And though there are gaps, the Caribbean Islands are much closer to Florida, Yucatan peninsula, Cuba and the Bahamas, which have beefier coastlines.

The beauty of maps like these for exploration games is that “things aren’t as they ‘should’ be” – but close enough to our present reality to be recognizable and still contain a sense of mystery.

And a map like this works for any type of game – not just one set in an ice age. A world of the near-future or even far-future works equally well, especially if you form new nations and new superpowers from what the map provides. Queensland, using the area around “Lake Carpentaria” as a base, could be the world’s new superpower. You never know.