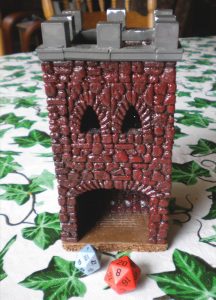 This is my dice tower, lovingly crafted from HirstArts Castemolds bricks. Simple little thing. Sits right in front of me at the game table.

Not too long ago I would have scoffed at using a dice tower. But then I started to get wrist fatigue during games. The tower started to have a lot more appeal then. So, a few castings (and some liberal application of Aleene’s Tacky Glue) and a dash of paint later, I made this.

I may have mentioned this before, but as GM, I roll in the open anyway. I think it builds trust between the players and the GM. And everyone knows going in – your player character’s fate hinges on the dice. No fudging.

The stars and planets align

So, a recent session begins with me calling for an initiative roll. It that first toss, three 20s were showing, including one produced by the tower. “Well, it looks like it’s going to be one of those days,” I said.

But even I wasn’t prepared for how prophetic my words would be.

I don’t know if the summer equinox had something to do with it, the rumbling of the washing machine in the corner or even the alignment of the planets in the heavens. But it became quickly apparent this was a day when we’d be seeing a lot of 1s and 20s.

Not every roll came up 1s and 20s. But there were a lot of them. One of our players delights in pulling from the Paizo Critical Hit Deck, it’s strange results notwithstanding (“I play this game for FUN,” he said). This was his day. Boom. Boom. Boom. The deck delivered a great deal of bleeding and strange critical effects.

But it wasn’t just the players. My tower kept producing 1s and 20s.Â  “Is it something I’m doing?” I asked. I even picked up the tower and shook it. “That’s not gonna make a difference,” one the players chimed in.

It was just one of those freaky days.

All those 1s and 20s meant the players had to keep reaching for my homemade critical fumble deck.

Usually, the thing gets only cursory use. In a given session, players might roll 1s on attack rolls a couple of times, at most. You can tell how little or much the thing gets used just by glancing at the discard pile.

Well, on this day, the discard pile kept growing.

More to the point, the fumble deck got a workout. And I have to say, I was pleased with how it played out.Â  It’s hard to get a feel for it when you only pull it twice a session. But when everyone – including the GM – is reaching in, you quickly get a sense of its effects on game play.

Basically, I want a fumble deck for flavor. I’ve never felt the fumble should be debilitating. It’s a house rule, after all, for what is just an automatic miss. There should be a slight penalty, but nothing that cripples a character’s ability to function.

To that end, each result on the deck also calls for a skill check or save throw (usually against a DC 20) to negate or diminish the fumble. I think giving players that second chance at avoiding failure encourages them.

Each card include an 8-pointed star for easy reference for determining random directions, just like one for a thrown grenade attack.

The deck has one other function, which is also particular to our group. It offers a mechanic for resolving ranged attack misfires into melee.
Maybe it’s because the Saturday morning crew has had SCA* members with more than a passing interest in archery, but the fact the rules don’t account for where missiles land when firing into melee has always bothered them. Those arrows gotta stick into something, they reason.

Each card indicates that the missile was # squares off its target, either shy or far or to the right or left. You then roll 3d6. Comparing to the chart on the card, that roll determines the square (relative to the target) the missile actually landed in, and the amount of damage. Basically, damage is by probability, so rolling 10-11 is a miss for 0 damage, 8-9 or 12-13 is nicked for 1 hp of damage, 6-7 and 14-15 was a glancing blow for 1/2 damage by weapon type, 4-5 or 16-17 is for full damage and 3 or 18 are critical hits.

I’ve thought this approach keeps the mechanic results abstract enough to stay in the spirit of the rules without us going too deeply down the simulation road (too many attempts to simulate “reality” tend to bog down a d20 game – whose round-based combat resolution is already a time-consuming exercise). But I think this one strikes the right note.

18 Responses to Troy’s Crock Pot: Rollin’ Ones and Twenties