GMing for a party of first-level characters is fun. All the numbers and stats are manageable, the PCs themselves fit within snug parameters, and no matter how much hit points grace you allow, one of them is not likely to survive the session. 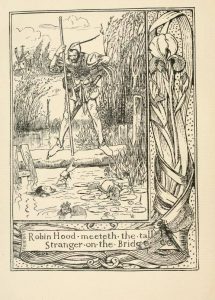 But how do you frame an adventure that isn’t all vermin, goblins and kobolds? The players have been all through that. They probably want something different.

I think taking a cue from the Robin Hood legend is a good way to go. (Yes, I’ve been inspired by my bookshelf, again. This time is was “Hood,” by Stephen R. Lawhead, which is his take on the legend by placing it in Wales in the aftermath of the Norman conquest.) Human adversaries and a worthwhile goal all in one package.

Elements of the legend

You’ve got a usurping lord and his low-level lackeys in one corner and good folk-turned-outlaw in the other. Sometimes the PCs are in the dark forest, where real-life beasts pose real challenges, and sometimes they are causing mischief in the market, where the sheriff’s men are just commoners with truncheons wearing scale mail. And if a raid upon the castle is in order, well, the adventurers have long bows and the knights do not.

If you want to add some spice, throw in a Maid Marion-type (she can be a damsel, or more interestingly, conspiring with the usurpers, your choice). Maybe your fantasy world doesn’t have room for a friar Tuck, but the local fantasy religion could either stand with the people and become an ally or see “sense” and side with the invaders, again, your choice.

And there is certainly gold to be had. If the PCs don’t want to rob from the rich just to give to the poor, that’s OK, too. The early Robin Hood legends didn’t concern themselves with that either. Those early Robins just pocketed their ill-gotten gains, and no audience complained to the storytelling troubadours about such endings.

Take back the kingdom!

It’s a fine goal for first- and second-level characters. And at the end of a few sessions, order is restored, the true king has returned and the PCs now have a forest or shire to call their own. Now their “real” adventuring careers can begin.

And nary a goblin nor giant centipede was harmed along the way. Huzzah!