In school, I opted for music and film appreciation, leaving my studies of art when the crayons got put away after the third grade.

My loss, because art appreciation is a wonderful spur for the imagination.

Still, it’s never too late to learn. During a recent visit to the St. Louis Art Museum, I met the following characters set in canvas and carved from stone.

Any NPCs for a future game? You decide.

Bakkhos, the satyr, king of the feast 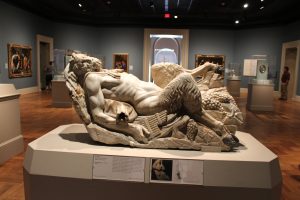 Most satyrs establish their domain in vineyards and orchards. But Bakkhos is different. The king of the feast is the permanent guest in the estate garden of the Lady Phontine, a prominent Dionysus worshipper in the city. Bakkhos has adopted the persona of a “civilized” savage, a philosophical sage who offers small bits of what passes for wisdom to members of the Dionysus cult and other cultural elites that seek him out. The Lady Phontine has done much to cultivate and advertise this personality — the close association continues to elevate her social standing. At heart, though, Bakkhos remains the “king of the feast” whose nature is reflected in wildflowers in bloom, the bounty of the grape harvest and hours of idyllic leisure spent in green pastures. For him, a little wine, a few notes on the reed pipes and a charming personality are enough to turn a private conference into a carnal frolic. Imparted wisdom, indeed.

As a villain: A corruptor of the privileged classes who uses debauchery and leverage to further the aims of dark gods.

Teun, vagabond with a secret 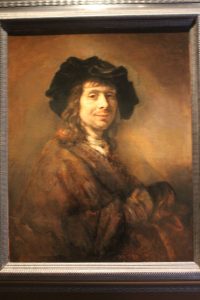 Portrait of a Young Man (perhaps an artist), workshop of Rembrandt van Rijn, 1661-2.

Behind the knowing smile of Teun lies a secret. The secret changes from day to to day, of course. Buried treasure? Gossip about the gentry? Guild politics? He is a broker of information, seeking not coin, but influence and goodwill. He makes deals with casual acquaintances and longstanding friends. The easy-going fellow always seems at home, whether it is in a seedy tavern frequented by adventurers or mixing with the well-to-do at a fair or public exhibition. Handsome with a hint of beard, he conveys the bearing of a rogue, something women admire and men are comfortable with. He can handle himself in a scrape, usually sticking in a fight just long enough to prove himself stalwart, but always ready to extricate himself.

As a villain: A pre-eminent blackmailer of the rich and powerful.

Riders of the surround, brothers Psiris and Hei 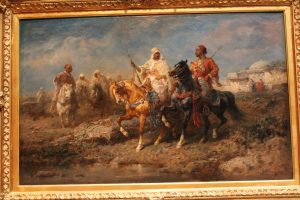 Arabs by Adolf Schreyer, circa 1861

Fortunate is the adventuring party, merchants, pilgrims or pioneers who have Psiris and Hei as their principal guides. The are accomplished trail blazers, capable scouts who not only have an unerring sense of direction, but can find passages navigable by the large wagons that are part of a merchant train.

Psiris, who wears light colored garb, is the elder. Confident and experienced, well into his middle years, he learned this craft from hard-won experience. Hei has been at his side only for a dozen years, benefiting from the elder brother’s experience, and has been spared more of the close calls that came from misjudgment. Hei talks wistfully of striking out on his own, to form his own company and train apprentices just as Psiris did with him. For his part, Psiris has known only the trail. Previous attempts to settle down have not worked out.

As villains: Scoundrels, who often as not, lead unsuspecting parties into ambushes or robbery by confederates, while maintaining their cover as “honest” guides.