Urban fantasy’s often a tough genre to nail down.

But adventures set in the modern world with mythological creatures and magic can be very rewarding.

The question: Where do you go for inspiration for your adventures?

Recommendation: If you don’t mind digging through the 50-cent back-issue bin at your local comic shop, I’d start with reading “Wonder Woman.”

A lot of the Amazon Princess’ stories bridge the two worlds, especially in the areas of big-hardware high-tech national defense intersecting with Diana’s own myth-steeped background. Essentially, these are techno-thrillers meeting mythological menace, an an explosive combination that’s sure to liven up most game tables. 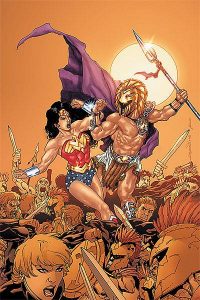 If you want a specific recommendation, I’d go with the “Rise of the Olympian,” story arc by Gail Simone and Aaron Lopresti and Bernard Chang, that was collected in a softcover trade in 2009. It’s got it all, including Wonder Woman taking on a tank (Really, it wouldn’t be a classic Wonder Woman story if she didn’t take out at least one tank.)

Consider: A team of urban/arcane-focused PCs tasked to defend a military outpost from an army devoted to Aries, god of War. Now that’s a starting point.

I’m sure stories from titles featuring Thor – Marvel’s counter to Wonder Woman – would also suffice. (Being a DC loyalist, though, I’m just surmising.)

Mythology is always a powerful source of storytelling potential. Berin Kinsman, aka Uncle Bear, is doing so with his latest homebrew campaign, The Intervention. (You’ll notice he too, finds inspiration in “Wonder Woman,” albeit from the rebooted New 52 series.) His PCs are assuming the roles of titans, fates and other godlings. On his site, he includes actual-play campaign reports, as well. It’s worth a look.

Does this idea have traction?

In the near future, continuing economic troubles in Europe gives rise to a new Pan-Mediterranean power.Â  Through the help of certain gods the Roman pantheon, it’s waging war on its neighbors, carving out the same space as the Roman Empire under Diocletian and Constantine. There could even be western and eastern seats of power. It’s up to the PCs – as agents of remaining NATO powers (or perhaps the western church) –Â  to take the fight to the power behind the throne, so to speak, the gods themselves, and restore Europe to its former self. As the Roman Empire at this time included north Africa and the Levant, there’s potential to include the currents of political change in these regions in the campaign as well.