We gnomes often make it a point to say that it’s important to know your players’ tendencies, to riff off their “suggestions,” know when to hit them with the spotlight or even exploit their weaknesses. 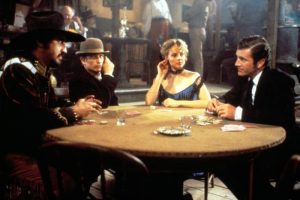 Mrs. Annabelle Bransford (Jodie Foster) plays with her earlobe, one of her “tells” that prove her undoing at the poker table, in the 1994 film “Maverick.” (Warner Bros. publicity photo)

But it works the other way, too. GMs have their own tendencies, poker “tells” as Mel Gibson likes to remind Jodie Foster in “Maverick,” and I got reminded of my own recently.

I set up one of my “go to” dungeon crawl situations: facing locked doors on opposite sides of a hallway. The PCs listen at both keyholes. One conversation will be enticing, the other less so. One encounter will be an appropriate challenge to the party’s level, the other will be stronger, almost overpowering.

I mix up the combination, but invariably, I make the overpowering encounter the enticing one. I mean, it’s more fun if you bait the hook, right?

So, after running through this routine, I can sense that most of the players are eager to nibble at the hook. But the party’s leader pauses, looks me in the eye – and smiles. Apparently I failed my bluff check, because he tells the others they’ll tackle the other door first.

But the gaming gods were looking after me. As the party’s leader opened the other door, he fumbled his toss of the thunderstone into the room – and flash-banged his own party.

And what was supposed to be a routine encounter – became the overwhelming one.

I guess they should have taken the other door … 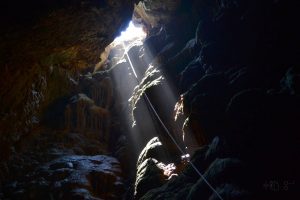 The entrance to a pothole on Skyros, Greece, taken by the photographer 5telios. This and other underground images can be found at the blog, subterraineandesign. (Photo under Creative Commons license)

Looking for a doorway to a dungeon? Wish you could show your players what that first glimpse into the dark places beneath the earth looks like?

Scrolling through just a few pages of the blog Subterranean Design should reveal a treasure trove of dungeon images that can serve as inspiration to fuel those first few steps of your own game.

And it starts right here:

All it took was to set Pandora running some of Scott Joplin playing syncopated piano to get everyone at the table in the spirit of my Fantasy Ragtime game.

One session in, and I’m finding that I’m re-skinning monsters to fit. The setting is Eberron, but with the sensibilities and analogous personalities of the Ragtime era. It also has healthy portions of steampunk (and its close cousin, dieselpunk) thrown in for good measure.

I used an ogre to stand for an unfortunate soul afflicted with the Dr. Jekyll/Mr. Hyde formula. (And for those of you scoring at home, Jekyll is pronounced: GEE-kul). This one went down pretty easy. I’ll have to substitute with some beefier monsters as Hydes in the future.

Then I used a sea hag for a mad doctor. That went much better. Sea hags are great mad doctors, especially when they’re wearing their mad doctor headband with mirror, which casts the hag’s evil eye effect.

I’ve nerfed the device a little bit, but should the PCs want to snag the good doctor’s mirror for their own bag o’ tricks, here’s my take on it (as well as some variants) as a wondrous item for the d20 3.5/Pathfinder rules:

Aura: moderate necromancy; CL 5th; Slot head; Weight 1 lb
Description: This item is indistinguishable in appearance from a normal doctor’s mirror, used to reflect light into the ears, nose and throat of a patient.Â Once per day, this device can direct a fear spell at a single target on the command of the wearer.
Construction: craft wondrous item, fear; Cost 8,000 gp.
Variants: Lesser and greater variants of the headband exist. Unlike the one above, all have three uses per day: Least, cause fear, CL 3rd, cost 2,000 gp; Lesser, scare, CL 3rd, cost 4,000 gp; Greater, fear, CL 5th, cost 13,333 gp.

12 Responses to Troy’s Crock Pot: GM “tells” and other ingredients