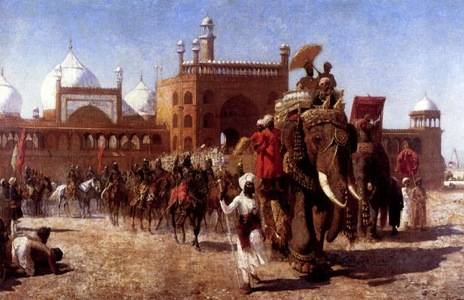 [1]
One of the things I’m often at a loss to provide my players on the spot would be a description of the various members of a merchant train or caravan, either being met by a party of adventurers on the road or a stock one the adventurers can hitch a ride with.

Having let this task go unresolved for too long, I grabbed my iPad and keyboard, a few reference books (fantastic and mundane) and found a shady spot in my yard. With my daughter along to help brainstorm, we came up with this random generator for occupants of a wagon train.

About half of the caravan entries are the sorts of things you’d expect to run into — pretty basic stuff — but the other half are the sorts of odd or compelling characters that should either surprise, delight or, at least, pique your players’ interest.

(Certainly, if a 99 or 100 is rolled up, PCs with animal companions should be mindful of this entry.)

Enjoy. And if you are so inclined, I welcome your suggestions on what to add to the caravan.

Only half the d100 spots are taken up. Go ahead and offer them up. As they say, there’s always room for one more!

* All caravans, regardless of size, have a caravan master’s wagon, 1d6+3 teamsters (drivers), 1 animal handler, and a supply wagon with enough foodstuffs (equal to rations for each member of caravan master’s team) to carry them through to the next leg of the journey plus 2 days. A prudent caravan master will hire guards at least equal to 1 mercenary for every five sections of train.

This is great! I will definitely be printing this out.

If you haven’t already check out Louis L’Amour’s (yes, that Louis L’Amour) novel [6]. Much of the story involves the protagonist traveling with a merchant caravan through 12th century Europe. However the book seemed so anachronistic as to be basically a wonderful low-fantasy romp.

What a wonderful suggestion. I will look this up.

With these characters, coupled with the dramatic personas list from the Wikipedia page that MountZionRyan linked to, I think you could build a secondary chart with some ready NPC names and their stations within the caravan.

Apparently, there’s a book of 1,000 memorable NPCs for any roleplaying game, too…

I heard it was nominated for an Ennie, just like Mad Men, or something. If you’ve heard of this book, you should go to the Ennie site and vote for it. [END COMMERCIAL]

Do you have any idea about how many rolls on the table you would recommend? Would it be based realistically on size of the wagon train, or on the storytelling device of how long the players will be part of train/spend exploring it?

I think I could come up with a plot on the spot for just about any of them by the way, which show how good they are as starting points into other adventures.

The first table is the caravan size determiner. But I’d say for a good number of GMs, that leaves too much to chance. I think in this case, the demands of the story should determine the size the caravan. Is your destination a trading hub? Then a larger caravan makes more sense. Is this more simply a train traveling between barony towns or monasteries? Then a small train should suffice.

Do you think it’s appropriate to roll for the list for each wagon, or is there some ratio you have in mind? ie: I roll, or decide on, 7 entries from the table and roll them up. Does that mean those 7 rolls should be the entirety of my caravan, or are they just the “interesting” wagons, and there’s an equal number of “generic” wagons?

I know I could do either, I’m just interested in what you would recommend.

When I initially did the caravan size generator, I was thinking those would be the size, in the number of wagons, of the caravan.
In the meantime, I’ve done more research, and found that in ancient Persia or along the Silk Road, for instance, caravans would include several hundred pack animals — just an incredible amount!
I think you CAN play it either way. This is the set number of wagons or this is the number of INTERESTING entries in an incredibly long caravan. (It’s an illusion of detail thing, anyway, right?)
I think for game purposes, it works out either way. So even if I generate 10 interesting encounters among the caravan — the chances are the PCs are likely only to need to interact with a handful at most.

Don’t leave without adding some WC love to this chart, dear Sir. Your creativity is very much welcome — as is that of all our readers. What would you add to our list?

Caravans bring prosperity and entertainment to the masses and hence are (in most cases) a welcome sight to any city management bods (princes, barons, grand high mystic poobahs etc) and so would be encouraged to make their city a regular stop. Stay with me here.

Thus, a caravan would likely be escorted into and out of a city and out to some pre-arranged point on the route by crack city guard.

These would pose a nasty problem for bandits and player characters trying to sneak into or out of a city by means of a handy caravan.

So: Would it be proper do you think to add a second die roll/table to have the escorting troops – or part thereof – in the caravan too? Depending on the position of same of course.

Caravan guards and city escorts are two different things, and I’ve made an allowance for the former in the text above the chart (though individual GMs can change that allowance to suit their needs). I think the existence of the second unit depends entirely on your world, specifically, guard units available for your town or city. My experience/understanding is that cities tended to use patrols to regularly police/pacify the surrounding area, rather than meet’n’greet every caravan that comes through. Certainly, a unit on patrol might accompany a caravan it encounters while making its rounds.
As for escorts out of a city, a local lord might make that accommodation, for a fee.
I don’t see why you couldn’t have such a chart, but it would be tied to the destination point rather than the caravan itself.
One other point: Lords interested in encouraging trade would find investing in and establishing way stations along trade routes to be more economical than having units of escorts at the ready. These take a variety of forms, from watch towers to fortified caravanserai (like you’d the Middle East) to simpler hostels (like the sort Mary and Joseph were denied entry into in the Nativity story). These would be manned and provisioned, fostered communication and security, and generally gave caravans “safe havens” to make for when there was trouble.
Does this eliminate the bandit problem. No. In fact, it created spots between where daring bandits were likely to strike. But it also meant there were staging areas for troops to respond more quickly to banditry and make their lives more miserable for attempting to steal from caravans.

I think there is potentially a follow up post along these lines — if I can find time to brainstorm under our shade tree. Lemonade sounds good.

For more on how to incorporate guards and watches with your wagon train — not to mention a 3.5 fully statted out NPC caravan master, check the Dragon magazine archives. Issue 345 (Eva Widermann’s frost giant cover) has an article by none other than some gnome called Martin Ralya detailing Serella’s Caravan. There’s good information there showing where to place drovers, lookouts, guards and passengers in a caravan train.

I think the most important take away from this article is that a group of young mages is referred to as a gaggle. Here I thought that gaggle only applied to geese and teenage girls. Would a group of Necromancers be a murder?
I love tables like this. Designing them and using them to push myself in unexpected directions during gameplay. Though about half the time I wind up just using encounter charts as simple lists and choose whatever seems the most fun at the time.
Personally I’d probably break the table up into several smaller tables grouped together by types most likely to be traveling together. Then make a master table to randomly determine which table to use ( or just pick one ). It makes a little more sense to me and I get to roll more of my pretty, pretty dice. I would also include some livestock for rustling, stampeding, selling, and slicing open to stay warm through the night.

A gaggle of giggling augurers? I would love to call a group of necromancers a murder!
Yeah, I thought about breakout charts, subdivided by merchants, settlers, etc. — but in the end I thought I’d stick with the d100.
If you’re willing to prep the lamb, I’ll start the grill!

Probably a sacrifice of necromancers.

A Graveyard of Necromancers?

Nice, Troy. I worked up something similar (but a little different) for a Silk Road-focused vibe; it appears in Secret Santicore (which is a free download).

The caravan thing makes for a great campaign setup as well, whether it’s across the Himalayas or down the Oregon trail.

Really nice list. I’m going to be putting it (and the way station one) to use in our games.

1. You included players, but I was surprised to not see any musicians, or, well, bards. The traveling musician is almost required in fantasy settings, and may be a permanent member of the caravan. 😛

2. Settlers make appearances throughout the list, but they’re all heading away from home. I suggest a family (or even prodigal child) returning to their original home town to visit, take over a family estate/business, attend a funeral, or just trying to bum an allowance off the parents.

[…] Troy E. Taylor @ Gnome Stew provides a quick way to describe various members of a traveling caravan. Having played more than a few characters as caravan guards over the years, this set of two random […]

[…] Troy E. Taylor @ Gnome Stew provides a quick way to describe various members of a traveling caravan. Having played more than a few characters as caravan guards over the years, this set of two random […]