Depending on the experience level of the players gathered around your game table, one thing to keep in mind is that the array of class, race and faction choices available to them can be overwhelming — paralyzing, even. 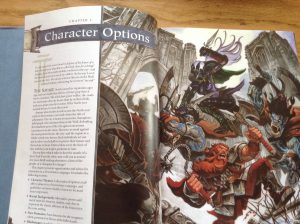 Start of the character themes section from the Neverwinter Campaign Setting. (Wizards of the Coast, 2011).

Even in a standard fantasy game of elves, dwarves, humans and halflings playing wizards, fighters, clerics and thieves, new players will inevitably ask: “What’s the best choice?”
It’s actually a hard question for GMs to answer. Mainly because the answer lies somewhere between the best choice for the player (elf princess? sure), the best choice for the party (well, we need a cleric) and the best choice for the game (a veteran gladiator who is a crack shot with a laser pistol would be awesome for this swords and planets setting).
I was thumbing through a copy of the Neverwinter Campaign Setting, which as a published campaign document does a good job of trying to approach this problem from the game perspective.

Instead of the usual useless disclaimer (“this adventure works with any character concept from any accessory we sell”), the setting guide actually presents a list of character themes, reinforced by pages of supporting material, that work especially well.
In the case of Neverwinter, some of the options presented include one of Oghma’s faithful, blessed with divine visions, an heir of Delzoun, a relative of the dwarf kings, and a shadar-kai, refugee scion of Netheril.

In all, there is a list of 13 character concepts, which helps prospective players zero in on what this game is about.
The list doesn’t preclude a player choosing another theme or concept, but even then, it informs their choice. Playing off the above themes, maybe they’ll want to play a Netheril bounty hunter bringing in refugee scions, or a human noble who thinks to challenge the dwarf claims.
But what if your game theme is a homebrew?

For a home game, it seems this is wonderful opportunity for group brainstorming before play actually begins. Gather your players together, present the setting in broad terms, touching on the concepts you want to explore. Then give them a chance to brainstorm on the types of character themes that might fit.
Some players will be more involved in this brainstorming process than others. It’s the way of things. But when those ideas are laid out for all, it makes for a more informed character class choice, spells out for the GM the level of interest and investment in a campaign, and means everyone has a solid foundation to start from.

This post is brought to you by our wonderful patron Chris Franklin, supporting us since January 2023! Thanks for helping us keep the stew fires going!

2 Responses to Troy’s Crock Pot: Characters for a Thematic Game