An aspect of the hobby I find rewarding is the craft side, namely painting miniatures and constructing terrain from plaster mold pieces.

Here is a “how to” on constructing a modular dungeon set with a single mold, using the kinds of crafting materials that are available at craft stores and big box retailers.

I purchase molds from HirstArts [1]. For this exercise I chose one of the least expensive. Cracked Floor Tiles [2], Mold No. 203 is an excellent choice as a starter. It costs $29. You can use it to create 1-inch dungeon floor pieces. It’s versatile: The smaller pieces can be used to create some three-dimensional structures as well. 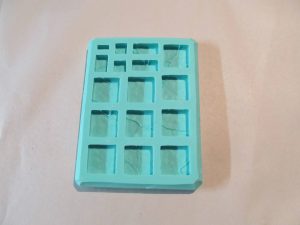 I learned to cast from the instructions here [4]. I use craft-quality plaster, which is available at the local home supply retailer, but can also be purchased from a craft store in a $5 jug. More durable molds can be obtained using dental plaster.

You will find that your first couple of attempts may not yield “picture perfect” casts. Don’t be discouraged. Like with anything, the more you do it, the better the results. Keep your spoiled tiles. They make great rubble for dioramas and other terrain effects.

I will be constructing a modest floor tile set, one that’s modular so that you can construct a dungeon level with several rooms. I’m using these Dungeon Tiles from Wizards of the Coast as a model. (However, I’ve also planned out my terrain building with quick sketches on graph paper). 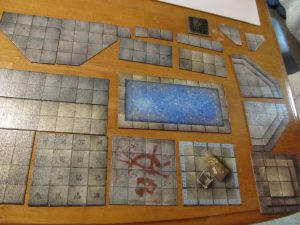 A selection of Dungeon Tiles will serve as inspiration for this project.

Constructing such a set will require about 250 1-inch squares, which means I’ll need 25 castings of my mold.

Yes, that sounds like a lot, and it is. Rarely do I make castings for a specific project. Rather, I devote one morning a week during the warm-weather months to mixing plaster and pouring the molds. I’ve got a spot under a shade tree behind my house where I set up an old card table and my molds. Counting mixing, pouring, setting, removing the casts and cleaning the mold, I average about 1 set an hour. I do about two sets of several molds I own each time, then set the pieces out in the sun to dry. By devoting the warm months to making casts of all the molds I own, I then have stored away the hundreds of pieces I’ll need for building terrain during the cold weather months. 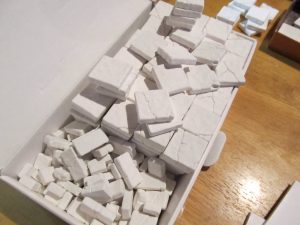 That’s a lot of tiles for this project.

I use a thin foam board — poster-sized pieces can be obtained for under $4 — to mount the tiles. But I’ve found that cork and cardboard works well, too. (However, I’ve found the cork tends to crumble after repeated use and the cardboard starts to bend under the weight and pull created by larger tiles).  The foam board retains its rigidity for large pieces. 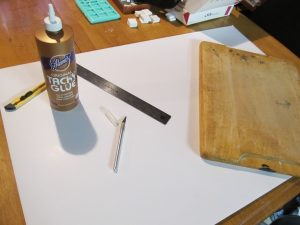 Blades, straight edge, foam board and cutting board come in handy.

I use a straight edge and knife to cut out bases for the sizes I will need. 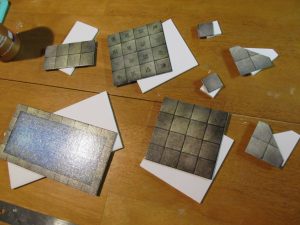 Everything lines up. Is it time to start gluing?

In Part 2, we start assembling and gluing the castings.

This looks cool, but I do not have the spare money of time for this aspect of the hobby. For now I need to stick to my battlemat and wet erase markers for tactical combat.

[13] – Good question. Probably the latter. D&D first, terrain second. I still don’t use a plaster mold set exclusively. If I have a map from a module or a set tiles that “fits” the mood or aspect of that dungeon, then I’ll go with that.

I have another question. What is the set up time like at the game table? With a battle mat, I can have a room drawn up in a few seconds. In a minute I can have some details like pillars, water, and torches.

[14] – Yeah, but, if you keep the map you make for longer than a couple of days you are going to be living with its ghost forever (the time is shorter than that for certain colors – the Staedler red & the Vis-a-vis blue being notable).

There’s a small lakeside town I once used in a Deadlands demo that hovers just inside the limits of perception, Brigadoon-like, in all my games these days.

Troy, have you experimented with staining the still-damp plaster castings with washes? I once had excellent “rime encrusted” effects that happened accidentally (but were most welcome) when I washed a diorama wall and floor I had cast in place.

[15] – That is true, I definitely concede that point. I have a small campfire that I can see on the mat but my players are really unable to see anything.

Although for a cheap, longer lasting alternative there is Gaming Paper (which can withstand being thrown off a building). I’m not saying that the plaster molds are not better for long term, they definitely are, but that there are cheaper alternatives for the financially screwed.

Ooh, an idea for an article could be the pros and cons of gaming on various surfaces. Plaster casts, acrylic sheets with a grid, battlemats, gaming paper, flip-mats, the paper maps that come with many adventures, dungeon tiles, etc. Could you do an article like this, Troy? Or other Gnomes?

[16] – Sorry, didn’t mean for that to sound combative. I use the Chessex mats exclusively myself. I have a convention game map I did on paper, but the paper was so damned thin it is see-through – it is basically hex-printed cheap wrapping paper of the sort you need two layers to properly wrap anything.

I hate it when a Gnome points me at that blasted website. I loose hours drooling over the kits on it.

[17] – No worries. I didn’t take it as combative. It was just a negative point for the battlemats, and a valid one. Leaving the markers on them too long is bad. At least with these you can come back a week later.

Did you use Gaming Paper? It looks so nice on the videos, I hope it doesn’t actually suck.

[14] -When I’m organized, that is all the various pieces are kept in a single container — Set up for a dungoen is less than 5 minutes.

Breaking down a dungeon, say to lay down a second level, for instance takes longer. Putting the pieces away, then arranging the new ones. Now you’re looking at a 15-minute break, so I call for the proberial potty/smoke break. Once everyone is up and away from the table, it takes less time to set it up.

There is a caveat. It would take less time if I wasn’t arranging simultaneously my containers of various minis along with each new dungeon section. These are prepped beforehand, each encounter gets its own container of minis. Even so, when I need to reuse a mini for a new section, then I have to stop and find the appropriate container. But whether I was using plaster tiles or any other mapping surface, that part would be the same.

[18] – I know the effect you’re talking about, but I’ve never purposely set out to duplicate it. When I’m casting, I’m usually working with 10 or so molds — assembly line style — so simply pouring, leveling, setting and drying them out doesn’t really allow me to alter my routine. That said, I bet that looked great.

[16] – My journey to plaster has involved adventuring on all sorts of mediums. When I started I was drawing my own maps with paper and crayons — the description of which even got me a letter published in Dungeon magazine back in the day. If there is interest in examining the plusses/minuses of the varioius surfaces, I’m more than game for doing an article like that.

[19] – I am interested in an article about the pluses/minuses of various gaming surfaces.

So excited to see how these turn out. I’m a sucker for “dungeon blocks” but can’t afford the fancy resin-cast dragon ones that are so beautiful.

Every time something like this comes up, it makes me want to invest in a fresh printer cartridge and knock out a stack of map tiles, Space Hulk style.

[19] – I’d also be down for an article on the comparative merits of various surfaces. My current DM uses an inch-gridded plastic mat made by Dritz (intended for sewing I assume, since there’s a graphic of a pincushion in the corner.) It’s a nice surface and erases well, but I always have the urge to make horrible “Dritz” Do’Urden puns whenever I see it. We (mainly me) get XP penalties for particularly bad puns… 🙂

[20] – That’s ingenious repurposing something you already have! That falls into the line of using a checkerboard in a pinch.

Another vote for the comparison of different surfaces. I’m looking forward to part 2 of this article as well!

Another vote for the “gaming surface comparison” article. I’m enjoying this series a lot. When you get to the end can you give us a price total and time estimate for what you built? That would be awesome. Looking forward to part 3!

I bought a couple of Hirst molds at GenCon this year, but I haven’t used them yet, as I don’t know the ratio of plaster to water for one mold. (I own #201 and #45).

I don’t want to make too much and just waste it. What’s your ratio/recipe?

…and now I notice the link to the instructions. Whoops.