I have a hex map detailing the lands north of Steffenhold – the barony town that serves as the central point of my home campaign.

The map is perfectly serviceable. The main geographic feature of each 10-mile hex is shown by a mapping symbol. There are lakes, rivers, roads and dots for towns. 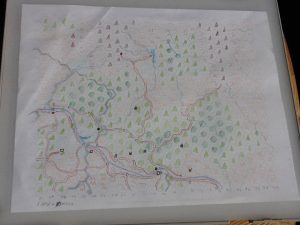 Hex map of the lands north of Steffenhold.

Should the players wish their characters to go exploring, I could tell you that hex 0314 contains the imposing stone-gray castle of the Earl ofÂ  Pennington Moors or that the hex 1304 holds the north end of The Hand, a large northern lake rich with perch.

(For advice on how to effectively key a hex map, I heartily recommend checking out the series of articles “How to Make a Fantasy Sandbox” from the blog Bat in the Attic.)

As useful as a hex map done with symbols can be, it’s just not evocative. A fantasy map should inspire a GM. It should lure players into the wilderness.

I wanted a handout that would feed the players’ desire to explore the ruins of Rochelle Abbey, reach the heart of the Ellenwood Forest or find the long-rumored pass through the Midlothian Mountains.

This is the first part of a short series detailing how I created my own fantasy map.

Two websites proved very instructive in my journey to construct a map that does justice to my campaign.

The first was the blogÂ Vaults of the Mad Archmage. His do-it-yourself map that expresses his vision for Castle Greyhawk should blow your socks off. It’s also a good lesson for a GM in how to take published material and make it your own. Best of all are the series of posts that take you through the map’s creation.

The other blog was Hill Cantons. He has two articles that express a similar sentiment–that rpg maps should generate ideas. They are “How to ‘Awesome Up’ Fantasy Maps” and “Top Five Fantasy RPG Maps.”

Taking elements from both, I embarked on my own DIY quest to bring the northern lands of Steffenhold to life and share that process with you.

I selected parchment paper for this project. Nothing too fancy, just something from a tablet of paper for novice calligraphers. The page I selected had a slight yellow tint, just to give a hint of an aged document.

A good reason to use calligraphy parchment is that it works really well with ink, which will be important later. But mostly I wanted something of better quality than your standard all-purpose printer paper.

Because I already had the hex map, I had an excellent base from which to work. Basically, I laid the parchment atop the hex map, put both on the light table, so that I could begin the preliminary tracing. 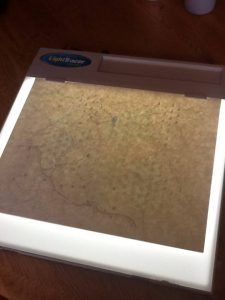 Hex base map and parchment laid atop light table.

(If you don’t have a light table, you can approximate this process by using graphite paper. In this case, you lay the graphite sheet atop the parchment, and then the hex map atop that, and redraw the features on the hex map you want imprinted on the new map. The only real disadvantage to this method is that it’s rough on the original).

At this stage, I was really only interested in placing those things — towns, ruins, roads and waterways, mainly – that would remain the same from the hex map to the decorative map. These I traced in pencil.

In the next part of this series, we’ll put pencil to paper and see what evolves.