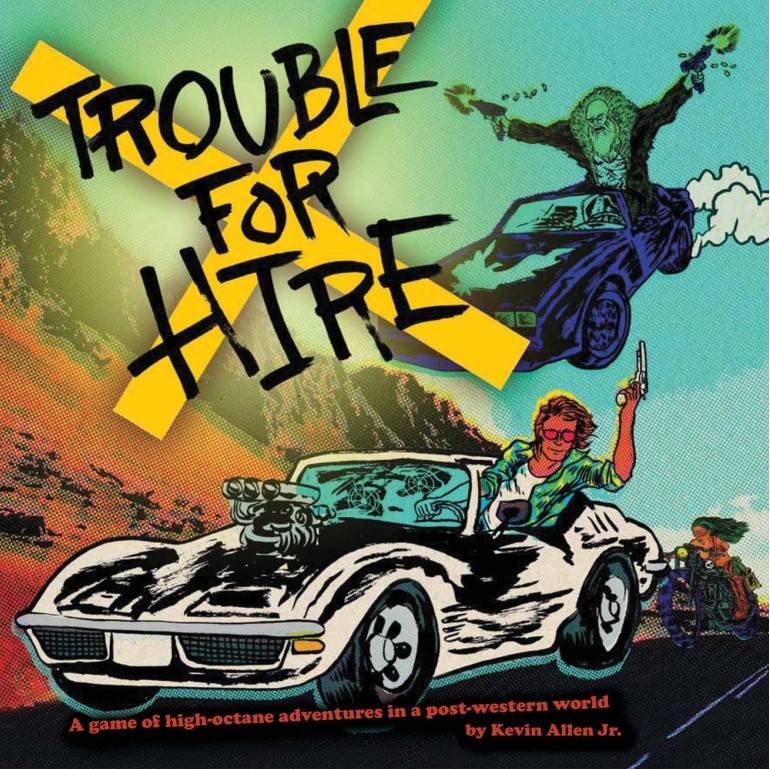 My brother and I had a weird ritual when I was in high school. On Easter, we would stay up until my niece fell asleep, hide eggs for her, and then watch the Blues Brothers. There was something oddly comforting about watching an obsessed pair of ex-cons on a crazy quest as they traveled cross country and ran into various obstacles, including homicidal ex-girlfriends, the police, and Illinois Nazis (which I probably would have hated even without watching this movie, but it was nice to have the validation in place).

Proving that there is a gaming experience for just about any pop culture memory you might have, Trouble for Hire is a game that deals with completing not quite legal missions while on a road trip, with gonzo events following hot on your bumper. There is a LOT of inspirational material listed, but if you never thought you would find a game that would help you capture the feel of The Blues Brothers, The Cannonball Run, Pulp Fiction, or Death Proof, you may want to keep reading.

This review is based on the PDF version of Trouble for Hire, which comes in at 123 pages. This product is most definitely in color. There are some seriously bright 70s and 80s inspired color schemes in this book, including some enormous block letters for the chapter headings.

There are a few symbols to call out rules or just random facts to help reinforce the themes of the game, as well as big, bold, red sidebars to call special attention to various topics. Many of the actual character illustrations are restricted to simpler pallets to convey the tone of the image being presented. There are also some photographs of various southwestern United States locations as well. Its contained chaos selectively harnessed to convey a specific feel, and if you are familiar with the source material, it creates some serious resonance.

There is some violent imagery, as well as some nudity, so if those kinds of images are problematic for you, it is something you may want to know up front. 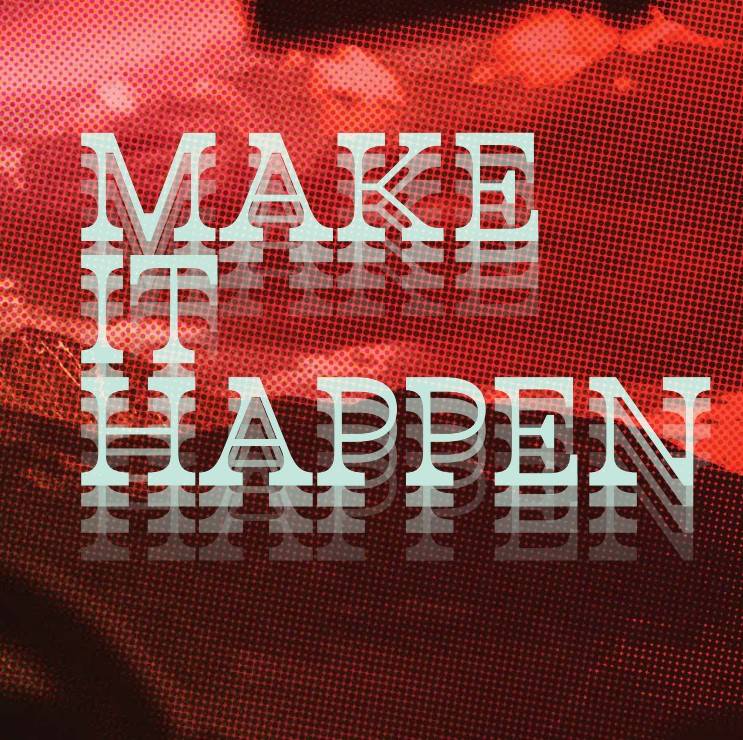 Introduction and Spirit and Setting

The first two sections of the book introduce the concept of the game, and what tropes and genres that the game is hoping to invoke. This is where we are introduced to the #HTP symbol, which is placed in the text when the book is specifically addressing rules and how they are engaged, and #DumbFact, which is put in the text when something is being conveyed that may give you some useful trivia for the overall tone of the story, but isn’t all that important to the game itself.

The game isn’t a broad game that deals with a larger genre. There are a limited number of roles that players will take, but the overall story is about a particular smuggler who takes dangerous jobs. He goes on road trips to complete them, and bad people and people from his past show up to complicate the job.

We get a section on the protagonist of this series of stories, and some details on his car. At this point, you may be wondering what kind of game this is. You don’t learn that quite yet. It’s a storytelling game that will detail the jobs that Ruben Carlos Ruiz takes, and the challenges that develop along the road as he works as a smuggler, courier, or wheelman.

This text is written in a very conversational tone, and in a tone that is in keeping with the source material. For example, when the game posits that you might ask when the game takes place, it then scolds you for asking a stupid question. More broadly, the game is billed as presenting “Post-Western” stories, stories where the protagonist would have fit in the Old West more than modern times, and never really has a place in polite society. It also mentions that even if you are portraying stories set in modern times, it is perfectly in keeping with the tone for everything to look like something out of the 70s until you introduce a modern element.

Each player in the game gets currency, called RPM, that they can spend to trigger effects from the sheet for various roles in the story. Once 10 RPM has been spent, the scene progresses, and everyone picks a new role. The player that is running Ruben may have to roll to resolve challenges, but the other roles in the story don’t resolve challenges, they only present them or help Ruben resolve them. There are also themes, which award RPM to players when they introduce the theme into the action they take on their turn.

The roles in the game include the following:

Each adventure will have a plan. The plan has mile markers that show when the story progresses, but only in broad strokes. For example, a mile marker might just say that in this phase of the game, we find out something new about what Ruben is hauling, and what that thing is or how it is found out is left open to the players.

Players can spend RPM to trigger challenges, frame the situation, and then Ruben’s player will describe how they plan on overcoming the challenge. Ruben’s player will then roll two dice, then picks one die to be the results die, and the other will get measured against the chart for the Kick dice selected. The Kick dice have a separate set of “extra” results that happen, separate from the success or failure of Ruben’s actions. The Kick dice include:

If Ruben doesn’t quite get the job done, he might have to pay out RPM, or take a consequence, like a hard jump to a new scene, injuries, or finding out that previously established facts aren’t actually true. The consequence is set by the player that introduced the challenge.

The game also includes the Three Lights. This concept is both a reward mechanic and a built-in safety mechanic. There is a green light, a yellow light, and a red light in play in the game.

Any player can pick up one of the lights and use them, but if you pick up the green light, you can only use it to award another player for the direction they have taken the game. Once they have it, they can spend it or award it to another player. Yellow and Red lights are always available to anyone that feels they need to use them.

This section goes into greater detail on how to create your own adventures, getting your friends to play, how to hack the game, teaching the game, and advice for play.

While I have sometimes seen a game go into detail about searching for online groups or visiting an FLGS or conventions, I don’t think I’ve seen many discuss the broader topic of picking out which friends would be likely to play this game and why it might appeal to them. For example, the text discusses the reasons that Role Playing Gamers, Film Enthusiasts, and Actors, Writers & Creative Types–as discreet groups–might find the game interesting.

The section on hacking the game delves into what roles might not make sense in other genres, and how the individual roles might look in other settings.

This section includes Characters You May Meet, Locations Out West, Adventures, and Inspirado. Characters you may meet include NPCs you can plug in and use in specific roles (other than Ruben and the Rider, who are who they are). Locations Out West have some noteworthy places to use for proper locations in various adventures. Adventures are more fully detailed scenarios that can be played out. Inspirado is a list of the various movies and media that inspired the game and its tone.

There are some colorful extras detailed in Characters You May Meet, from recurring perennial screw-ups, to creepy federal agents, to roadhouse owners, to scary criminal bad guys. While many are specific characters made to fit a mold, it is interesting to note that when dealing with some archetypes, the text introduces them, but doesn’t fully endorse using them, such as The Roadside Mystic, which is discussed as a trope, but not given an actual example character.

The Locations Out West section gives some example locations that might come up in the game. Some of them are very broad, just suggesting the types of locations that are appropriate for the kind of story being told, such as “a field of shipping containers.” Others are specific, notable real-world locations, like New Idria, California, a ghost town that doesn’t show up on most GPS.

The sample adventures include:

Some of the elements in the above jobs reflect some of the inspirational material, at times in ways that may not mesh well with the table. As an example, the pageant queen is specifically described as morbidly obese, and I’m not sure what that would bring to a story given the context of the job. Other elements are going to depend on exactly what kind of criminal activity the players are going to be comfortable portraying.

On A Mission From God
Â The game provides a tightly focused package for telling very specific stories, with lots of room for variation within that prescribed band.Â

I really like the pacing of this game. I like the mechanic of using the currency of action to pace how quickly the story progresses, and I like the ability to match die results in either succeeding at an action or causing secondary effects.

Gaining RPM specifically when you introduce themes from the story into the game is a great way to mechanize recurring elements. I love the way that the safety tools are integrated into the mechanics of the story by turning them into traffic lights and fitting the overall theme. The game provides a tightly focused package for telling very specific stories, with lots of room for variation within that prescribed band.

The genres that serve as an inspiration to the game have lots of problematic elements, and while the game itself has built-in safety elements, and even addresses the problematic content of those foundational stories in various places, the example roles and stories still include elements that could easily be used in a manner that is less than sensitive. It’s a very careful balance between risk and reward, trying to call back to certain tropes while not letting them devolve into something less healthy for storytelling.

The discussions about elements found in the inspirational media aren’t shy about pointing out what’s wrong with things like racism or cultural appropriation, but because of the overall conversational, generally humorous or sarcastic tone used throughout, some of that frank discussion may have less impact than it should.

I can’t help but compare this game to Fiasco, and in that comparison, I think this game holds up well in that company. It’s telling a narrower band of stories but provides more tools for pacing, themes, and the ability to turn the dials to make humor more or less of an element in the individual game session.

The biggest downside to that is that narrow band of stories has a lot of baggage that must be carefully navigated to keep the content from becoming overly exploitative. Because of that, people that might enjoy the pacing or the mechanical twists might still want to be sure they know what is part of the overall package before they dive into playing the game.

What are your favorite games for telling crime stories? What are your best practices for keeping gritty or controversial content safe at the table? What is your favorite movie and why is it Blues Brothers? Let me know in the comments below!