Traversing Tables in Hoard of the Dragon Queen

I’m running a table of D&D Encounters on Wednesday night. Encounters is the easy, or at least low commitment, fork of D&D’s Adventurer’s League. D&D Encounters is ideal for new players and runs great with even pre-generated characters. So far, it’s going well, though the experience can be a bit odd from a story point of view.

Some players show up consistently, week after week. They’ve got an idea about the storyline and are tolerant about the recap and backfilling for new players when they join the table. Other players show up erratically; a week here, skip a few weeks, then return. That’s great–that’s a playstyle that Encounters is specifically setup to encourage. You can take your character to many game stores in the US or around the world and play in essentially the same story. One father-son team I know played at several stores during their cross country trip from Fresno to Boston a few years ago. 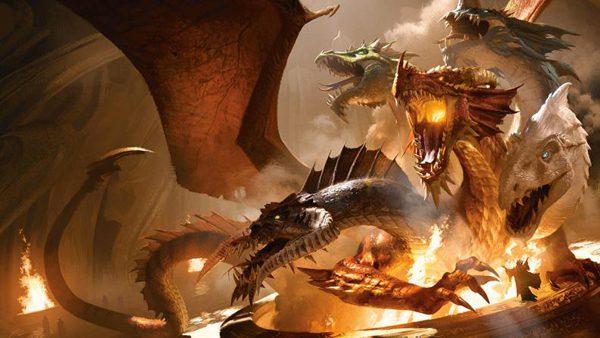 Preparing for the Night

Once you have 12 or more players, Encounters splits effortlessly into tables of 4 or 5 players and a GM–as long as you have enough GMs to handle the tables. Because of the casual, drop in nature of play, it’s hard to predict how many players will make it each week. If you’re consistently in the same range, the organizer knows about how many GMs to have ready for the week… though it’s always good to have at least one player ready to cross the table and emergency GM for the night, in case the stars align and turnout’s heavier than normal.

At the end with fewer players, it’s trickier. Too few players means no game at all–a GM can’t officially run with fewer than three players. (Even a great GM would have to be ready to modify things dramatically if exactly three players show–routine encounters for a table of six are a deadly threat to a table of three.)

Tables of three to seven players are the expectation, the officially allowed numbers. (That’s one more than the six players per table allowed in previous seasons.) At the start, we had six or seven players each week… but some of those were new players, some returning. A couple of weeks into the season, 7-10 players show up most weeks. So we’re teetering–sometimes we need two GMs, occasionally only one.

In the game world, it’s murkier–some characters started the adventure with a relatively large group that splits up and is reinforced arbitrarily each week. It’s hard to build the feel of a party with people popping in and out… with a corresponding shift in who you adventure with each week. On the other hand, it’s a great way to try out the new system with little commitment–if you’ve been curious about 5e, but your group’s in the middle of playing something else, you can pop down to your local game store and try it out. What else were you going to do with your Wednesday night?

So far, Encounters for D&D 5e feels similar to Encounters back in 2010. I’ve played with various levels of abstraction–sometimes a grid clarifies, but when the PCs are escorting a fleeing group of parishioners, a grid and movement by initiative doesn’t make sense. I like the flexibility of picking the right level of description and abstraction for each encounter and battle.

If you can’t play Encounters at a store, you can still play along with your home group. The adventure that we’re playing is part of the Hoard of the Dragon Queen adventure. Just pick it up, begin playing, and you’ll be able to swap stories with people around the world about [REDACTED].

If you want to just print out a character and play, the starter set characters are available in PDF. Looking for more? A one-page sheet guides you through character generation requirements and gets you ready to game. If you want to delve into details, the Adventurer’s League Player’s Guide is your resource.

Please drop a note in comments and let us know if you’re playing–or running–either D&D Encounters or Hoard of the Dragon Queen in any format.

4 Responses to Traversing Tables in Hoard of the Dragon Queen