Trapped in a Room Full of Drunken Monkeys 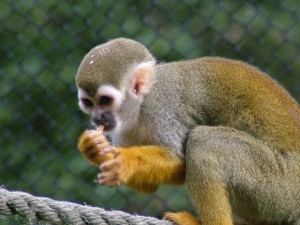 It may look cute, but poo will be flung.

Ever have one of those moments when everything is falling apart around you, when all your careful plans are out the window and there’s nothing left to do but break down and laugh hysterically? Okay, maybe that’s a little extreme, but I ran one of those games last month when I made a tiny error in judgment. I tried to run a game on the biggest drinking holiday of the year: St. Patrick’s Day.

It wasn’t actually St. Patrick’s Day, but it was the closet Saturday, so close enough for horseshoes. Earlier in the day was a parade and there was alcohol throughout. Most of my friends are not heavy drinkers, but even the most casual and sporadic of drinkers can get a little silly when they’ve been imbibing. I probably should have known an RPG wouldn’t be the best choice and suggested playing some board games, but I was feeling a little guilty about dragging my feet on getting my long-running Eberron game up and running again. I wanted to give them an RPG.

One of my regular players was actually not going to be there that night, but a friend from out of town was going to be joining us. In addition, another friend – who was originally supposed to be out of town, but plans fell through – was also invited to join us, giving us a more than full complement of players. The game I had decided to run was ‘Monster of the Week’, something I had successfully run twice before. Going into the session, I was planning on building the scenario off of the characters they created. This is what I had done the previous two times and it worked really well to build the plot of the game around what the players threw at me. Unfortunately, I wasn’t prepared for the slightly manic silliness that was present on that particular day.

Monster of the Week character creation has the players choose an association for their characters, something that drives the reason they’re together hunting monsters. The completely original and not-borrowed-at-all concepts suggested are ‘Slayer and entourage’, ‘road tripping monster hunting family’, and ‘government agency investigating supernatural mysteries’. The previous times I had run the game were very easy because of what the players chose as their bonding concept. This time, not so much. It wasn’t that they couldn’t decide, but more that they started going for goofy and got sillier from there.

Among the many whackadoo ideas they tossed out there, the one I remember most clearly was a retirement home full of elderly hunters in their 80s. Under different circumstances, I might have laughed and rolled with the idea, letting them make their crazy, incontinent old folks that have to deal with a chupacabra eating neighborhood yap-yap dogs in the wilds of Sarasota, Florida. At that particular moment in time, though, I wasn’t in any frame of mind to deal with it. I’m not sure if my sense of humor had shorted out or if I was so intent on making it a good game, I couldn’t move past the semi-serious game I had been thinking of. I put my foot down. No octogenarians. (One of the other players also mentioned that he really didn’t want to play a character whose super power was holding his bladder.)

While they didn’t exactly calm down after that, they did eventually agree to all be monster-hunting-college students on a foreign trip to Athens, Greece. At least it was an idea I could work with. I thought maybe things would get easier from there, but .. well.. yeah.

First, we ran into a bit of a snag with one particular aspect of Monster of the Week character creation. Each player is supposed to establish a connection between their character and every other character in the group. This concept works great when there’s three or four players, but trying to make it happen with seven players can take up an entire game night. It’s definitely worth doing if you’re creating an ongoing campaign, but with a one-shot, it just takes way too much time. Once we realized how long things were going to take, I streamlined it down to making sure each character had enough connections to bind them to the group. It wasn’t perfect, but at least it gave us a starting point. 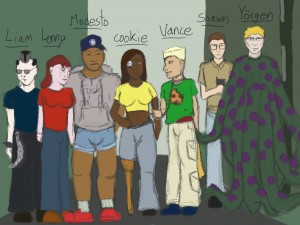 I can’t even… Even the standard group pic from the game defies description. I have no idea why there’s a peg leg and tentacles, but there you go.

Second, and more importantly, they were still a bit wound up. I really felt like I was trapped in a monkey room at the zoo, with them running all over the place and poking at everything, but missing any of the plot hooks I was throwing their way. For the most part, I’m used to letting players have time to explore who their characters are and roleplay some fun, random stuff, but I also feel like a supernatural game should, at some point, touch on the supernatural. After a while, I began to lose patience with them and finally snapped at them when the third or fourth attempt I’d made to advance the story was either bypassed, ignored, or argued with.

Don’t get me wrong. There were some great moments in the mix. The Wronged and the Spooky locking themselves on the roof of the hotel for some mid-afternoon nookie. The Acolyte being given a mission by his mysterious organization to visit a historic site when his teammates had no idea he had ulterior motives. The Monstrous wandering through the foreign streets and inadvertently rescuing a mugging victim while trying to satiate his blood lust. The Mundane shooting down every easy chance he had to get it on with hot Swedish co-eds while his brotastic adoration was focused on the Chosen that barely acknowledge he existed. There was also a modern incarnation of the Three Furies in ‘Lean-In Business Suits’ showing up trying to avenge the injustices done in the past of one of the characters, but that was the real plot and it was totally secondary to the crazy.

When all was said and done, I was exhausted, but most of the players said they had a good time and enjoyed the game. Several of them also apologized for being a little out of control. Ultimately, I felt bad that I couldn’t quite roll with the punches and give them as silly a game as it seems they wanted at that moment. Being a good GM requires a degree of flexibility, not only in adapting to the curve balls your players throw at you, but also in gauging their mood and figuring out what type of game they’re ready to play. Unfortunately, sometimes when your mood is drastically different from theirs, it can be a little difficult to make it happen. Sometimes it’s completely okay to step back and acknowledge a game isn’t quite working for everyone.

Note: Whackass artwork from the game done by Chris Mann who is a fantastic artist, if a little crazy.