Three Diabolical Elves For Your Game 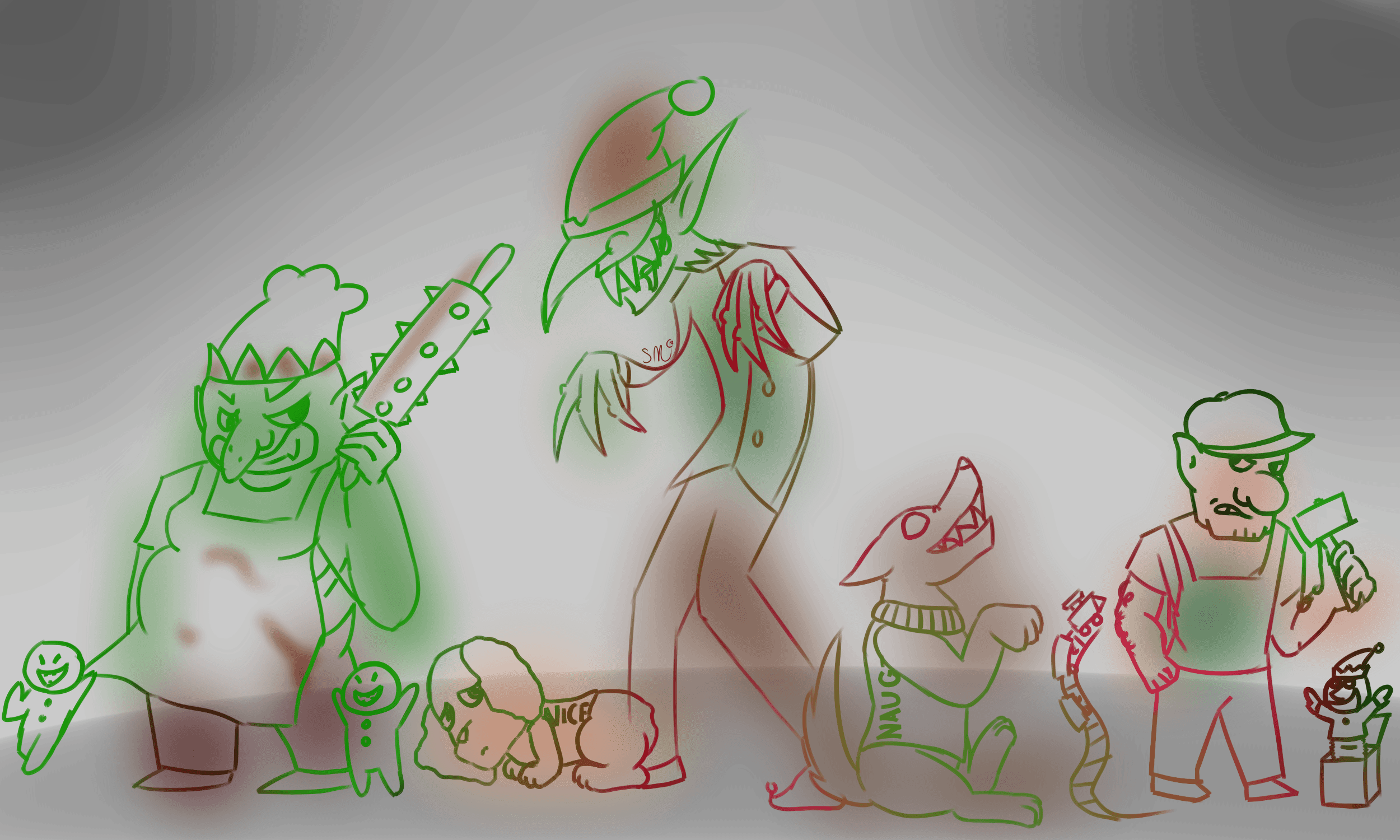 A few years back,  we ran an article about evil Santas. Aside from landing all of us on the perpetual naughty list, it went over fairly well, so this year we’re happy to present a list of three of Santa’s dastardly elves. Enjoy your holiday but hope you don’t get a visit from one or more of these villains.

Slapwhistle the baker:
This corpulent elf has doughy features and a perpetual sunburn from the blazing heat of his oven. He wears a great stained apron of heavy white leather. Slapwhistle cooks treats for the naughty children of the world to gorge themselves sick. He is accompanied by a legion of gingerbread warriors and can spoil food and drink he finds to be of objectionable quality. Adventures featuring Slapwhistle start with loud noises in the kitchen as he bakes mounds of holiday sweets. Getting there will require confronting hordes of gingerbread warriors. Once apprehended, Slapwhistle will attempt to blind with handfuls of flour and spice, slow with ropes of dough, and throw kitchen implements – but has little stomach for direct combat. Though driven off, he has almost certainly destroyed the holiday feast. Dare you eat the sweets he has prepared?

Rumplethar the stable master:
Fast as a flash, impossibly thin and taller than a large man, with ears and nose like knitting needles, Rumplethar can press himself almost completely flat and fold himself up into a tiny size to hide. He is Santa’s stable master and brings ponies, puppies, and other pets to naughty children. Though seemingly affectionate, these pets both cause and draw the children into trouble.  Rumplethar can also command all animals, though loyal ones will fight him to the best of their ability. Adventures featuring this elf will often start with every animal in the neighborhood howling, crying and dashing about their homes as they feel the elf’s presence. Shortly thereafter, he will lead the family on a home invasion hide and seek with the family pets distracting and hindering their masters, but rarely outright attacking them. Once caught he will fold himself into nothing and disappear, but the gift he leaves will undoubtedly be the source of many future adventures.

Grumcatcher the toy maker:
This tiny, hard bodied elf has a square, angular face and potato-like nose and ears from which hang perpetual icicles. He labors away making malicious toys and gadgets to leave beneath the trees of bad little boys and girls whose particular streak of naughtiness amuses him. In his presence, objects spring to life to create mischief and sow discord. An adventure featuring Grumcatcher often starts with several encounters with rowdy household objects, and may end with a confrontation with the toy maker himself who has many dirty tricks at his disposal – as well as being brutally capable with his carpenter’s mallet. The real adventure may begin much later as the presents he leaves begin to corrupt their new owners.