Things I Learned while “Inking” 14 GameScience Dice with a Crayon 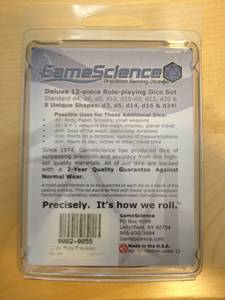 In preparation for the release of the upcoming DCC RPG from Goodman Games, I recently acquired a set of GameScience dice.

If you’re not familiar with GameScience, Col. Lou Zocchi, or why these dice are different from the dice you’re probably used to, these two GenCon 2008 video sales pitches by the colonel himself are a good place to start: part 1, part 2.

Here’s the short version: GameScience is most famous for making precision-edge dice — razor-sharp, very lightweight, and with flat faces. The license to produce these dice currently resides with Gamestation.net, and they make and carry the full line in all sorts of colors. Significantly, GameScience dice are by default not inked and not tumbled; tumbling is the process that allows other dice manufacturers (like Chessex, to cite my favorite) to ink the numbers and smooth the edges of their dice. (GS does make a few non-precision dice, notably the d7 and d100.)

Non-tumbled dice are more likely to roll truly random results because, as I understand it, tumbling is never as even as you’d think. That’s why casino dice aren’t tumbled: They have sharp edges, totally flat faces, and their pips are filled in with plastic that’s the same density as the plastic of the die itself. They also cost a shitload of money and, unsurprisingly, don’t come in any shape but six-sided.

Sooooo, history lesson aside, why am I writing about GameScience dice? Because I thought they sucked, I was wrong, and I learned some things in the process of discovering that I was wrong. I couldn’t find too much info about them online, particularly not from the perspective of someone who initially didn’t like them, so I figured I’d help fill in that gap.

Why I thought they sucked

GameScience dice are relatively expensive, they always include a blemish from where they were broken off the mold sprue — usually either a small chip or a protruding piece of plastic (supposedly neither affects the results) — and you either have to pay more to have them inked or ink them yourself.

For what GameScience dice cost, you can get much fancier, pre-inked dice with no imperfections. Depending on the die type, these are in the Q-Workshop price range, and well above Chessex or other big manufacturers. I’ve used precision dice before, way back in 1987, and I hated them.

Why I bought them

Because I’m weird about dice…

On top of that, I’ve read accounts online written by folks who own them, love them, and even came to love the stranger aspects of using them — like inking them yourself. I started to think it was worth biting the bullet and giving these dice a try.

I read a few things about how to ink GameScience dice before settling on my approach, notably Jeff Rients’ post about doing it with a Sharpie and MJ Harnish’s review of the dice themselves.

I dug out a couple I had in my collection, grabbed a white crayon and a fine point Sharpie, and gave it a try. The Sharpie worked pretty well, but it smeared easily and I could see that if I wasn’t more careful than my fat fingers allow, I’d probably wind up with smudged dice. Bleh.

But the crayon was actually kind of fun to use, the results looked good, and it really popped in white on gem dice. I decided to spring for a set of ruby red gem dice, which I rounded out with a couple extra d6s (gotta have three), a hideous d7, and a precision d30 from another vendor (which was hard to find).

(I didn’t try a paint pen because I don’t own one, and ditto for grease pencil; I didn’t try actual paint because that sounded like way too much work. Apparently those are all good methods as well.)

How I inked them

I stole a white Crayola crayon from one of my daughter’s sets, put down a paper towel to catch stray crayon rubbings, and set to work. Here’s some uninked dice as a reference: 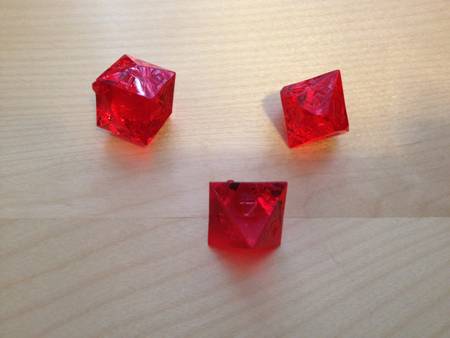 I rubbed every face of the die with the crayon, making sure to focus on going across the numbers, not with the grooves. I rubbed until every number looked perfect, then wiped the excess wax away from the face with a paper towel. If a number wasn’t totally filled in when I was done, I added a bit more wax before moving on. 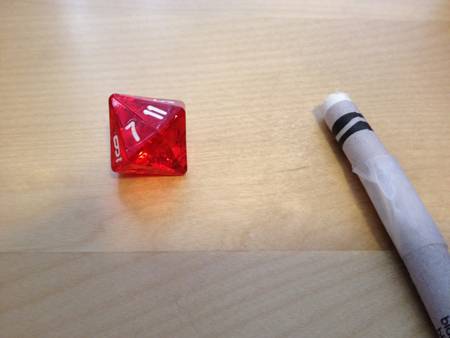 An example of how these won’t be perfect — note the mold protrusion on the right, which has snagged some crayon wax I can’t remove, and the fine crack across the 13, which has also gotten inked: 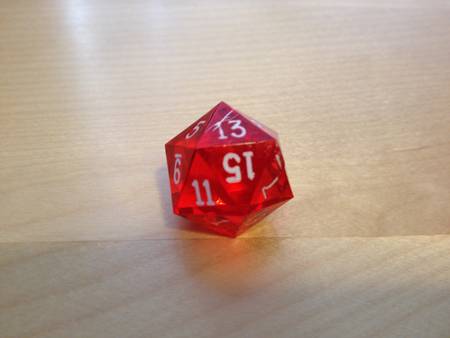 Most of the set, fully crayoned in: 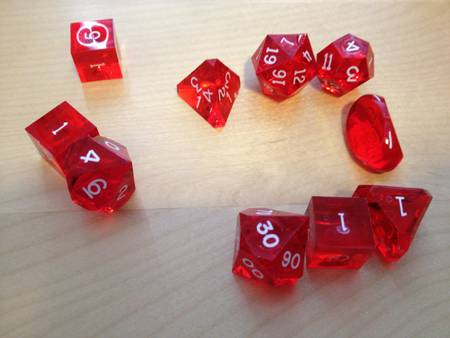 Like I said, I expected to dislike these dice — I didn’t even want to buy them. But I learned a few things after I went over to the precision-edge side:

Will my GameScience dice be displacing my bag full of Chessex and Q-Workshop dice? I don’t think so. But I’ve been wrong before…

In any case, I hope you enjoyed seeing some photos of weird dice, reading about coloring things with crayons, and are either fondly reminiscing about your own GameScience dice or considering buying a set of your own. They’re weird, but they’re kind of fun, too.