They Can’t See the Wires 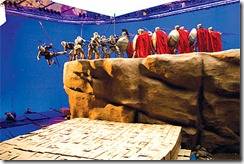 …and even if they can, they’ll just ignore them.

Have you ever watched a movie while it’s being made, especially one laden with special effects?

It looks nothing like the finished product, even though you’re watching the raw material. Actors and actresses look badass as they go through their choreographed routines, but the scene is betrayed by the wire-fu cables, chroma-key screen, and the fact that their punches and kicks are inches from hitting anything. (The picture links to its originating article.)

Have you ever watched a ‘magician’ practice his or her tricks? Once you know how it works, there’s no illusion at all, just some distraction, a few clever tricks, and quick hands. But when you’re sitting in the auditorium, even if you know it’s nothing more than sleight of hand, it’s magic.

The same effect is at work in your campaign. Your players will rarely be able to see the wires and borrowed raw materials. Because it’s more fun to play along, they’ll fill in the gaps and ignore the gaping plot holes (sometimes consciously, sometimes subconsciously). So don’t worry too much about making everything ‘perfect’.

In years of gaming, I’ve found that if you can make it fun, the players will usually play along. But:

Have your players ever helped you cover a plot hole? Or do you have a more antagonistic table, where they’ll use virtual crowbars on every seam, prying for hidden cracks? Do you feel you worry too much about plot holes, NPC motivations, and other structural issues? Sound off in the comments and let us know!

6 Responses to They Can’t See the Wires