There’s Snakes in this Motherf$*%ing Stew! – Warning! adventure awaits ahead on the pottymouth skies 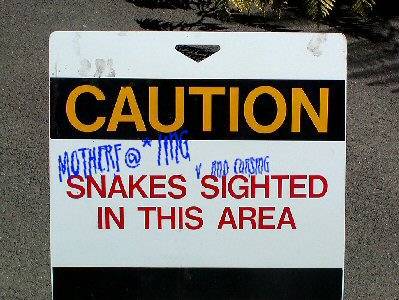 Snakes and Cursing Ahead!

So, this weekend, I had the joy of running an impromptu game of Snakes on A Plane: The Roleplaying Game.Â And when I say joy, I mean it.Â I don’t think my little gaming group has had such a frantic session of outrightÂ Fun in a while. That’s not to say that our weekly game isn’t fun because it’s a huge highlight of the week (my week anyway) but c’mon!Â when a Motherf&*%ing Snake, pops up out of an airline commode, demanding that the eight year old brat trying to sabotage her father’s engagement to the prissy Donna solve a Sudoku puzzle before she can force open the restroom door and escape from the thug who’s desperately trying to shut her up so he can kidnap her and hold her for ransom, well…Â let’s just say you don’t get that kind of excitement in your standard weekly game. If you did, you just might die from sheer awesome overload.

As bizarre as it may seem, this is my second time running a game of Snakes on a Plane.Â  Here are some general tips I’ve picked up as a two-time SnakeMaster:

1- It’s fun to not give away you’re playing the Snakes on a Plane RPG until the AGS (After Goddamn Snakes) phase of the game. It’s fun to spring this on your players, but don’t be too disappointed if they guess it ahead of time. It’s not essential to having a good time.

2- Further constrain the backgrounds to specifically require action on the plane to be successful.Â My first game of Snakes on a Plane, both the PCs essentially had the goal: “Get to where we’re going alive” While it works, it’s not nearly as much fun as when you have “I have to convince Donna that she doesn’t want to marry my father”, “I have to kidnap someone on this flight”, and “I’m an anti-terrorism agent looking for a suspected terrorist before they can blow up the plane”.

3- Encourage players to work with each other and create characters that work against each other or with each other.Â  Having one of my players playing a horrible eight year old trying to break up her father and his new girlfriend and another playing a kidnapper trying to kidnap and ransom her for her father’s money was a blast, as was the conflict between the spurned lover determined to take revenge on his lost paramour by blowing up the plane and the team of the anti-terrorism agent and the loose-cannon cop.

4- Since we’re encouraging players to have interrelated purposes, it’s likely that some inter-character conflict will occur, which the game has no rules for. Offhand, I’d suggest that both players make rolls with the number of successes determining the victor.Â In combat situations, I’d treat the loser as being subject to a snake attack with different flavor text. Of course, both parties involved are subject to snake attacks as normal.

5- Take a short break after character creation to brainstorm a few ideas of things that could happen (aside from the snakes) that each PC will need to deal with. Do daddy and Donna start smooching? Does the suspected terrorist pass a note to the stewardess? Once the AGS phase starts, there’s precious little time for thought. Ideally everything will be happening in a giant chaotic tangle and you’ll have to adjudicate multiple actions at once in rapid fire succession.

6- Keep the clock ticking. I suggest a pile of chips or another type of counter. Every time a player tries another action,Â take a number of chips off the stackÂ (one if they succeed, two if they’re attacked by snakes). Don’t hesitate to call attention to how little time is left. This game goes FAST.

7- Push everyone to participate. Pointing at a player and demanding “What are you doing right now?” as well as using the unprovoked snake attack rules are good ways to keep anyone from just sitting tight and letting the game pass them by.

8- It’s pretty likely that one or more characters will be killed by snakes, either through normal play or as part of the “victory” conditions. That’s normal, don’t sweat it. It’s a one-shot after all.*Â In my game this weekend, all but one of the PCs were obliterated in a bomb blast, leaving the sole survivor a single Cool roll before the plane crashed. While he made his roll (to sit down and put his head between his knees and brace for impact), he didn’t complete his objective, so the snakes got him as he crawled out of the wreckage.

9- Don’t hesitate to drop the language bomb. First, be honest. If you were reaching into your overhead compartment, and there was a snake there, chances are, it’s not a snake.Â It’s a Goddamn Snake! Not only is cursing like Samuel L. Jackson genre appropriate, but it’s fun and a little cathartic too. A lot of the fun of the Snakes on a Plane RPG comes from just letting loose. Don’t be incessantly monitoring yourself to make sure you don’t say something naughty. It inhibits the incredible anything-goes attitude of the game.Â

So, give Snakes on a Plane, the RPG a try.Â It’s surprisingly fun for something that was pretty obviously a joke.

*And if you figure out how to support Snakes on a Plane campaign play, my hat is off to you. There’s probably a motherf&*%ing snake in it anyway.

8 Responses to There’s Snakes in this Motherf$*%ing Stew! – Warning! adventure awaits ahead on the pottymouth skies