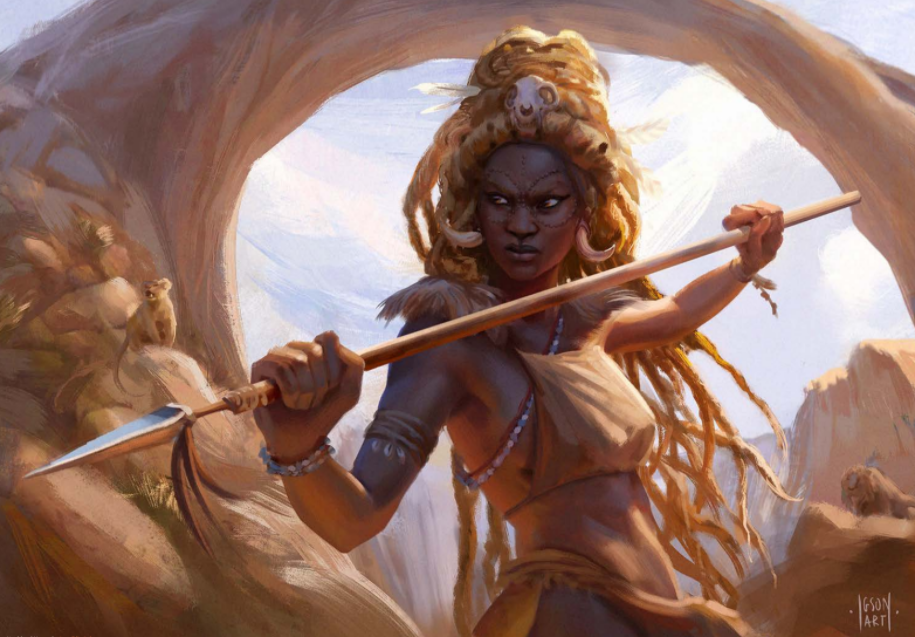 This first impression was originally published on my blog on 9/22/2020, and is reprinted here with slight modifications.

A few months back, I saw the preview art for the Wagadu setting, an Afrofantasy setting by Twin Drums. The artwork was beautiful and evocative, so I signed up to get a notification when the project went live. Apparently I wasn’t paying attention when I signed up, because the project is even more ambitious than I thought it was.

Not only is Wagadu going to be a D&D 5e compatible campaign setting, but the project is also attempting to fund an MMO. If you want to take a look at the Kickstarter, you can find it here. I will admit, I’m looking at this much more from the perspective of the campaign setting than for the MMO. I’ve been off the MMO path for a while now, but, interestingly, the concept is to fund the setting, and to express that setting in roleplaying, in multiple media.

Visions of the Future

As part of the Kickstarter, there is an extensive 5E preview document. It comes in at “sort of” 200 pages, as the early portion of the book is laid out in two-page spreads, while the final section of the book is still in single page, pre-production layout.

There is a ton of artwork in this document. I’m doing this as a first impression, in part because I’m not as able to engage with the MMO side of the project, and in part because I haven’t read through all of the adventure material in the preview.

The overall concept is wild, on multiple fronts. The setting takes place over multiple ages, and the MMO will represent some of the earlier ages of the world. In the 5e material, it is stated that some of the events that emerge from the MMO will eventually be incorporated as past events of the 5e setting, which take place in the 7th era of the setting, further down the path than the MMO’s story.

If you think that’s an ambitious concept, there’s more. The setting is influenced by African folklore and history, but the setting is even more high concept than that. You see, there is an upper world filled with magic and impressive, thousand-year-old dynasties. That’s not where this setting is focused. It’s focused on a special plane that appears very similar to the upper world, but where life is harder and more directly influenced by the spirits.

The 5e setting uses the standard D&D character classes, although there are some extensive notes on how the classes function and what purpose they have in the setting. For example, barbarian rage is a function of tapping into a connection with a spirit animal and allowing them to partially possess the warrior in question. Monks are called Ancestral Wrestlers and learn to tap into a spiritual energy called Nyama. Paladins are shrine guardians. Bards are Griot who learn about the past from Ancestors. Clerics worship the gods, Druids worship the spirits, and Warlocks bargain with the spirits.

All of the people who live in Wagadu were humans from the upper world, but when they fall from the upper world to Wagadu, they eventually connect with a lineage. This results in seven different peoples to choose from, although it’s possible, though rare, for someone to change their lineage from growing closer to the traditions and spirits of another lineage. The lineages are:

I’m not doing any of this justice with my summary. The presentation was very compelling, although my favorite of these so far must be the Daa’ima. There is just something haunting about them that really got me.

Mechanically, these resemble races from D&D 5e, with a similar structure from the standpoint of the rules. Most of these have an overall set of traits, and then a subset of specialized lineages under the main lineage. The main lineage rules provide either a +2 or a +1 to a stat, with the subset providing another +1 or +2 to a different stat.

The text points out that the rules are still in the early phase. For example, one of the lineages gets access to a 3rd level spell once per long rest once the character is 5th level, and I’m not sure that feels quite right, but I’m also willing to wait out the rules portion of the setting to see what it looks like after further development.

One thing that I appreciate about this is that the humans falling to Wagadu were something before, and then are drawn to a lineage. That means that the rules aren’t saying that everyone from this region is pre-determined to be good at X. It means that someone from the upper world that had certain traits and tendencies aligned with the spirits in a particular way.

Each lineage also has a section at the end of their entry discussing how roles that are associated with various classes also take on other responsibilities based on the lineage, giving a built-in role-playing hook and reinforcing the feeling of the setting. 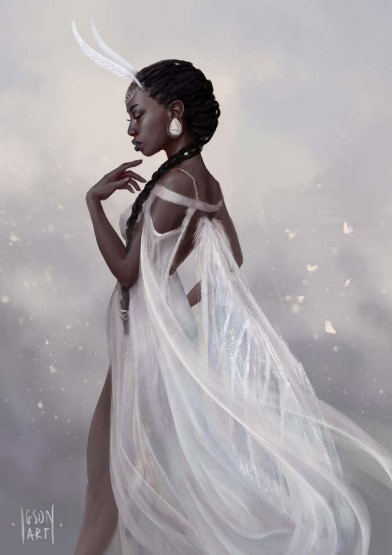 There are a few set landmarks, but the nature of the setting is that those landmarks may keep a broad, relative position from one another, but the exact terrain between two points may change and shift over time. Not just in what grows there or who lives there, but the literal amount of distances between two points, as well as lesser geographical features. I love the flexibility that creates for a group that is telling stories in the setting.

Different eras may have different rules. For example, in some eras, people can’t harm one another (although the spirits don’t have to follow this rule). In other eras, death isn’t permanent. In the current era, death can be reversed by powerful magic. This also can explain the difference between the rules that govern the MMO, representing past eras, and the implementation of the 5e rules of the 7th era.

People are drawn to create and join existing civilizations, and there is overlap between multiple generations before an era comes to an end, but every one that is a “permanent” resident falls from the sky. If people have children, those children grow faster than normal, and eventually drift away, presumably returning to the cycle of life in the upper world.

I mentioned that I wasn’t able to do a deep dive into the adventure, but from skimming it, I like how it is structured. Because the conceit of the setting is that new people fall from the sky, the adventure essentially follows the PCs from their fall to Wagadu, their introduction to people living in the world, and adventures that take them deeper into the setting to learn the ins and outs of how things work.

After the adventure, there is a section detailing folk tales, magic items, general information on animals, hunting, and spirits, and eventually, creatures.

There are about 50 stat blocks. About 2/3 of the stat blocks belong to creatures encountered in the included adventure, with another section on expanded creatures from the setting. There are some local animals, like crocodiles, and various spirits, but there are also creatures like the quilled antelope and the horned leopard.

I really want to see more of this setting. The art and layout look amazing. The setting is very compelling, and it has its own very unique take on how it is presented. If there are any concerns I have, I would have to point out two things.

One is the very minor tweaking of things, like the aforementioned 3rd level spell as a lineage ability given out at a specific level, and also a little bit of the format of how the spell is presented. That’s fine-tuning and playtesting, and my fascination with the setting elements is going to keep me watching this beyond some technical tweaks.

The other concern is one that I can’t quite nail down. People that fall to Wagadu from the upper world that were disabled gain powers to compensate for their disability when they fall, with a specific list of what abilities they gain based on what disability they may have had. I think this is trying to be inclusive, but might be skirting around the edge of doing it in the best way possible.

Beyond that, this preview document got its claws into me and I had a hard time pulling myself away long enough to write up this first impression.