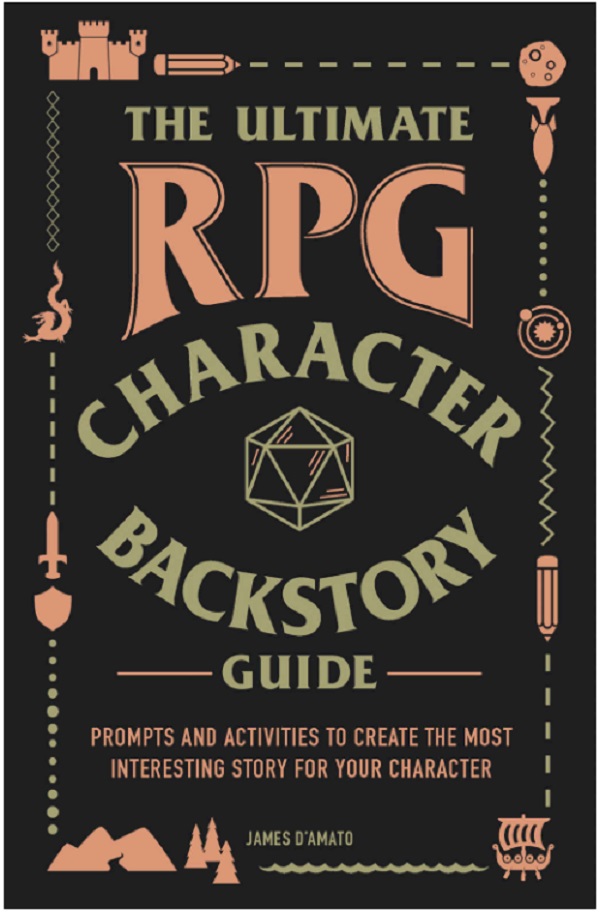 There is no shortage of books that look at roleplaying games from the perspective of game moderators. In fact, some of the other gnomes have been involved in some amazing books on the topics of preparing, managing, and executing various games at the table. What is less common is a book about roleplaying that isn’t designed for a particular system that is aimed squarely at players instead of moderators.

There is an increasing number of games that give players an opportunity to flesh out their player characters in deep and interesting ways. Traveller was one of the earliest RPGs to address detailed backstory with its lifepath system, which some modern games such as Modiphius’ Conan and Star Trek also use. Pathfinder includes Character Background rules in Ultimate Campaign. Shadow of the Demon Lord has some detailed character background tables in the core rules, which are expanded in the Victims of the Demon Lord line of supplements. The Dungeons and Dragons supplement Xanathar’s Guide to Everything also includes a detailed This is Your Life section that can be used to generate a more detailed backstory.

System specific backstory rules can be useful but are often created as a means of narrowing mechanically defined character options. In other words, these backstory elements often explain why a character picks the game elements they have for a character or narrows the options to help eliminate option paralysis. That doesn’t mean that those backstory systems are deficient, it just means that even the depth that is added in those systems may not touch on important backstory elements or motivations that a character might have.

The next natural extension of this would be for a player to have a guide that isn’t tied to a specific game system or setting. A guide aimed at getting a player to get inside their character’s head in a way that isn’t just a means of determining if they should specialize in using a sword or an axe. The Ultimate RPG Character Backstory Guide is a book that aims to add details to a character’s life story that aren’t just a means of justifying what game elements went into mechanically building that character.

This review is based both on the paperback version of the book, and on the Kindle version.

The book is 272 pages long. It contains no illustrations, but does have solid formatting throughout, with headers, bullet points, lists, and call out boxes. The colors present in the book are black and orange-red. The formatting for the various bullet points and lists remains consistent in the Kindle version of the book. Because so much of the book is comprised of lists and questions, the formatting makes it very easy to follow from one exercise to another.

Introduction and What Can We Accomplish?

The first three pages of the book establish the goal of this work. There are numerous exercises in the book to help a player find the perspective of their character. These exercises are largely written with a game like Dungeons and Dragons in mind, but the What Can We Accomplish section helps to define the power level and experience of a player for which an exercise is written.

As you might expect from the title, these exercises are for low-level characters to help determine how they got into adventuring in the first place, and how they determine party dynamics as they first begin to work with one another. The suggested character range is levels 1-7, but that’s essentially short hand for adventurers that are still relatively new to adventuring.

The following exercises exist in this section:

Some of these exercises cover the basics you would expect when discussing a character’s backstory, like the very basics of where they were from, and the people that they knew. Other exercises go a bit deeper, examining how a member of the party would petition another to gain their help for a goal, as well as examining what it means to have interactions with characters that have a different status (higher or lower) than the player character.

Some of the exercises are relatively straightforward, while others are multi-step procedures that build on the answers provided in previous steps.

The exercises in this section include the following:

The exercises in this section are designed to add details that characters may not have thought to stop and add as they began to advance in levels or get more adventures under their belts. Many of them examine how the appearance of a character may have changed, or how they might describe their fighting style or abilities differently now.

Some of my personal favorites are “I’ve Heard Stories About These,” which is a generator for coming up with wildly inaccurate things a character might believe about a monster they still haven’t run into at this point in their career, and “Fish Stories,” which is a guide to determining how exaggerated an exploit from your past has become. I couldn’t help but think of the Hero of Canton from Firefly.

The final section of exercises is recommended for characters of levels 15-20, or at least those adventurers that have become larger than life in the campaign.

The exercises for this section include:

The exercises in this section deal with campaign elements such as how a character may have made a major change in the setting without contemplating the ramifications, as well as looking forward to how the character’s actions will be viewed in a historical context. There are also exercises that look at how many enemies a character has vanquished and what that means, people and places that are long gone, and how supporting characters in the service of the player character operate or act.

Some of my favorites in the section are “God, No,” which is an exercise that details how the player character would deal with a visit from a deity, and “For the Myth That Has Everything,” which is about trying to determine what you could provide your fellow epic player characters as a gift.

Ultimate Ups
Â The book does a wonderful job of bringing up motivations and off-screen events that neither a player nor a game moderator would commonly think to add to a game.Â

The book is a great resource for thought exercises. Just reading through the exercises without doing them is entertaining, but there are some deep character examinations that can evolve by following several of the multi-step procedures.

It’s not really a downside, but because there are so many exercises, it may be easy to get lost in them if you really want to specifically narrow down some details about your character. Being written through the lens of games with similar conventions to Dungeons and Dragons means that some exercises will either not be as useful to non-fantasy gamers or may take a little bit of adaptation to be useful. Some of the exercises, by default, give the player a little more world-building authority than a game moderator may be willing to hand out, especially if they are playing in an established setting. While entertaining, some of the exercises exist just to be humorous, and don’t do much to flesh out the backstory or history of a character.

Anyone that has been a player in an RPG is likely to get some enjoyment from this product, even if it is geared towards fantasy gaming. Even without using it to flesh out a specific character, the various exercises are both entertaining and instructive about the kinds of elements players may want to add to a character. Reading the exercises is also likely to give a game moderator some ideas about what questions they want to answer over the long term in established campaigns.

What are your favorite system agnostic, player-facing products? How often do you read products about roleplaying games that aren’t about a specific system or genre? We would love to hear from you in the comments below!