The Trouble with Trolls

“Through the darkness lumbers a large humanoid creature with a rough, green hide. Its glaring face has a pointed chin and a crooked nose, while each finger ends in a claw.”
“Oh, it’s a troll. Who’s got acid or fire magic?”
“Your character wouldn’t know that!” 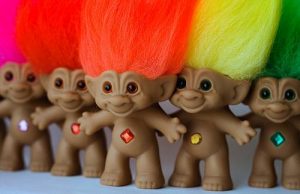 No, not those kind of trolls, but they’re a little tired too.

More than a few players have stifled a sigh at that admonishment. If you’ve played any variation of D&D, and Pathfinder counts, you’ve probably run into this very situation. The players know what they need to do to defeat the monster, the GM gets frustrated because the characters shouldn’t be as knowledgeable as the players, and in turn, the players may get irritated at having to play dumb yet again. It feels like an everlasting argument.

It’s as if that slimy, green, regenerating jerk is trolling my RPG experience.

Last Friday, in a friend’s D&D game (5th edition), we players ran into this very situation. She’s been doing a great job with the game so far, but she is pretty new to wearing the GM’s hat. I don’t think she did anything wrong with the way she handled the situation, but it did get me thinking about the dilemma player knowledge vs. character knowledge can present to a game. I’ve played 1st, 2nd, 3.0, 3.5, 4th, 5th edition, and Pathfinder. I’ve run most of them. My somewhat unfair reaction to this familiar situation was very much, “Here we go again.”

As the GM, you work hard to keep the game a fun and challenging experience, but if players know too much about the setting or the mechanics AND they use that knowledge in the game in a way their character couldn’t possibly know, it’s incredibly frustrating. Especially when it allows them to easily stroll through what should have been a challenging fight. Metagaming can undeniably be a big problem, but unless you’re playing with immature players deliberately trying to cheat, it might be worth taking a step back to try and understand why the players are doing it and what you can do to prevent it before it happens.

It’s as if that slimy, green, regenerating jerk is trolling my RPG experience.
Familiarity breeds contempt. D&D has been around for over forty years at this point and for many of us, it was our gateway into the hobby. Think about how many times your players have faced trolls and how many times they’ve been asked to pretend they don’t know about how it regenerates or its weakness to fire and acid. Unless you’re playing with children or newbies just getting into the hobby, your players have probably been there and done that many times. Try and keep in mind how experienced they are as there’s only so ignorant they can make their characters. Especially when playing a game where the tactical considerations of combat are part of the challenge.

We could just as easily be having this conversation about any number of things experienced players have faced time and time again. Do they have to play dumb about dragons and their breath weapons? Can they know that vampires are held back by holy symbols and belief? Can they buy a silver weapon to fight a were creature without having to make a lore check first? What about knowing some of the tropes Cthulhu players have faced over and over again? Trolls just happened to be the critters that made me start thinking about this.

If you’ve got experienced players, you’re going to have to compromise or put a bit more work into the game:

Be clear up front what level of knowledge their characters have. If their characters are supposed to be ignorant peasants that only just picked up a sword to fight off a goblin invasion, they should know what your expectations are with ‘game knowledge’ from the first game. This may not solve every instance of this type of metagaming, but it’s better to state it up front than have the argument during the fight itself.

Let the players know what they know and chalk it up to folklore. Remember that most fantasy type settings should have a strong oral storytelling tradition. Evenings weren’t just spent staring at the wall and waiting for television to be invented. Just because they’ve never actually faced a troll before doesn’t mean they wouldn’t have heard stories about them. You could even use this to your advantage by playing up the horrific reality and violence of the creature when compared to their old meemaw’s stories.

Use more obscure opponents or reskin the common ones to be something else. If it’s that important that your players and their characters be unaware of what they’re facing, go the extra mile and find something uncommon for them to fight. Most games have huge bestiaries offering plenty of monsters and opponents of all flavors. Take a little time and find something less common that still fits your needs for that encounter. If worse comes to worst, take the stats and give the critter a makeover and a new name.

Have you ever had to deal with a tired trope that had no mystery left for your players? What did you end up doing to address the problem? I’m curious how other GMs have freshened up the game when the players have already been around the block a couple of times.

16 Responses to The Trouble with Trolls